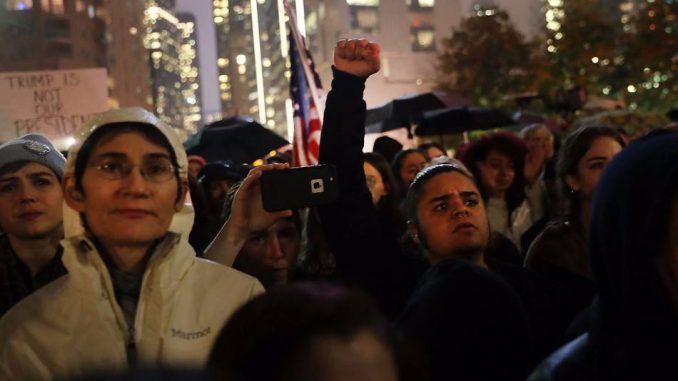 The president-elect’s Jan. 15 press statements directed at Europe just five days before taking office have again opened the contentious issue — within the U.S. ruling class — of how U.S. diplomacy should treat relations with Russia and with the European imperialist powers in NATO.

Although there is a real battle going on, the positions taken by both Donald Trump and the entrenched imperialist state — the CIA, the Pentagon, with political support from the leading factions of both the Democratic and Republican parties — are aimed at extending the influence of Wall Street and the power of the Pentagon.

Trump has repeated his earlier criticisms that NATO is “obsolete” and chided those European countries that don’t spend the required two percent of GDP to contribute to NATO militarism. He has also said he would negotiate with Russia, offering to relieve sanctions in return for a reduction in the nuclear stockpile.

Both contending ruling-class factions threaten to use military power to promote U.S. interests. They are both militarist and aggressive. Both have confronted People’s China and the Democratic People’s Republic of Korea.

Trump’s group is not in office, so has no record yet. The more traditional group has already wreaked havoc on Iraq, Afghanistan, Libya and Syria and promoted a coup in Ukraine supported by neofascist elements. They menace Russia and consider it a strategic enemy. Not only Republicans like George W. Bush and John McCain are responsible for this program, but also Democrats like Barack Obama and Hillary Clinton.

Assault on workers at home

While both ruling-class factions are driven toward imperialist war by the unsolvable capitalist economic crisis, they have different domestic programs. They especially have different public faces.

Trump is allegedly a populist. Mainly, this means he acknowledges that life has become precarious or even miserable for many in the U.S. His solution — which is no solution — is U.S. chauvinism supplemented by the most backward racism, misogyny, xenophobia and Islamophobia.

Despite his feigned “populism,” Trump has assembled an administration of Wall Street heavies, crony billionaires, Pentagon generals, climate-change deniers and racist reactionaries who have dedicated their lives to destroying the government departments that they’ve been chosen to run, along with the environment.

It would make no sense to give this gang any time to carry out the crimes they plan. One must anticipate a frontal assault on whatever benefits and services remain for the population and confront it.

A movement arises — will it be derailed?

Trump’s unexpected election provoked a spontaneous wave of demonstrations. This wave included those from the Black Lives Matter movement and pro-immigrant rights “Dreamers” who had been fighting Trump all along.

It also included many first-time demonstrators. Some might have been disappointed Clinton supporters. Some were Bernie Sanders’ supporters who may or may not have voted for Clinton.

This movement to confront the new president has grown enormously since those first 10 days in the streets. Not surprisingly, it is filled with contradictions. Everyone from the anti-Russian neocon establishment to cutting-edge anti-fascists detest Trump — for much different reasons. And this movement includes many who would never have protested a Clinton inauguration.

But the reality is that they are ready to take to the streets and to organize politically to confront Trump. Most will battle him issue by issue. That means defending health care, protecting Medicare and Medicaid, fighting for a higher minimum wage, defending immigrants and Muslims from arrest and attack, fighting for reproductive rights, and defending Black and Brown people from racist cops.

Only by doing all this can they defeat Trump and his cronies.

And only by participating in this movement, winning over its best fighters to be leaders and directing it to support the movements of the most oppressed can revolutionaries contribute to the struggle against Trump and against the Democrats. Those who choose to criticize from outside are abdicating their role.

Fight racism! Not Russia and China!

Right now, the most insidious attempt to derail this movement comes from the offensive by the CIA and the corporate media to blame Trump on Vladimir Putin and Russia on Trump.

This distortion is repeated, although Clinton’s elitist refusal to address problems of economic stagnation and prolonged unemployment, especially among poor people away from the big cities, probably cost her 10 times the votes that her leaked emails did.

The offensive is insidious for two reasons:

First, it occurs as U.S.-NATO tanks have been deployed in Poland and Eastern Europe, up to the Russian border. The propaganda offensive thus backs real U.S.-NATO aggression that at a minimum risks a new arms race.

Second, it deceives those in the new anti-Trump movement into believing that painting the new president as a Putin puppet presents them with an easy path to his demise. No, the battle against the Trump program will be neither easy nor short. Being in a bloc with the CIA, McCain and the Clinton grouping would only undermine the movement’s independence and struggle potential.

NATO is not just “obsolete,” as Trump says. It is an instrument that Washington uses to line up European imperialist countries behind its strategic program. NATO has led wars against Yugoslavia and Libya and backed illegal occupations in Afghanistan and Iraq. NATO should be smashed.

As the anti-Trump poster available at workers.org thunders: “Fight racism, not Russia and China!”