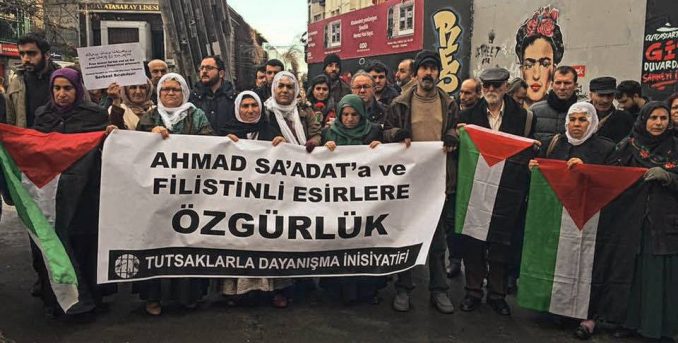 Events held across the world on Jan.12-14 demanded freedom for Ahmad Sa’adat, the general secretary of the Popular Front for the Liberation of Palestine, and for all Palestinian prisoners. Sa’adat has been imprisoned by Israel since 2006.

“Sa’adat is not only a leader of the Palestinian left but a respected leader of the entire Palestinian national movement,” Khaled Barakat, international coordinator of the Campaign to Free Ahmad Sa’adat, told Workers World about the days of action. “In fact, he became a leader in prison over his many arrests through the years.”

Prior to his seizure in 2006 by Israeli forces during a raid on the Palestinian Authority’s Jericho prison, Sa’adat had been imprisoned by the PA since 2002 over the assassination of the Israeli tourism minister, Rehavam Ze’evi.

The many parties to Sa’adat’s capture “demonstrate the array of forces acting against the Palestinian people: the Zionist state, the U.S., U.K., and other imperial and colonial powers … were involved in his arrest and abduction from Jericho, and the PA’s policy of ‘security coordination’ at the behest of Israel,” Barakat said. 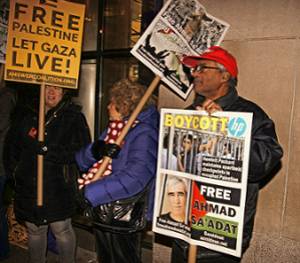 Members of the PFLP’s armed Abu Ali Mustafa Brigades shot Ze’evi, who advocated the complete ethnic cleansing of Palestinians from the West Bank and Gaza Strip, in 2001. The action was in retaliation for Israel’s assassination of Abu Ali Mustafa, Sa’adat’s predecessor as general secretary, in an airstrike on his Ramallah office weeks earlier.

Ze’evi’s shooting inside the Hyatt Regency in East Jerusalem made him the highest ranking Israeli official ever killed by the Palestinian resistance.

The AAMB said at the time: “The response decided upon was difficult and full of danger, but the fighters had a strong will in their hearts and a dedication and willingness to sacrifice for Abu Ali Mustafa and the Palestinian revolution.” (pflp.ps)

In 2008, an Israeli military court sentenced Sa’adat to 30 years in prison for leading an “illegal terrorist organization,” the PFLP.

Like every other Palestinian political faction, from Fatah to Hamas, the PFLP is banned under Israeli military regulations.

Events for Sa’adat began in New York City on Jan. 12 with simultaneous meetings by NYC Students for Justice in Palestine and Workers World Party’s center.

At the center, John Fletcher, organizer for Samidoun: Palestinian Prisoner Solidarity Network, called Sa’adat “a veteran of the resistance movement who comes from one of the most important generations of Palestinian resistance.” ­(youtube.com)

Weekend actions continued with a protest by Samidoun outside the Best Buy store in Manhattan’s Union Square, opposing Hewlett Packard’s services to the Israeli prison system. Other events took place in Albuquerque, N.M.; Hilton Head, S.C.; and across at least eight European countries.

Palestinians ended the mobilization in Gaza on Dec. 16 with a mass demonstration by PFLP members and other ­supporters.

For more information on Sa’adat and Palestinian prisoners, visit the websites of the Campaign to Free Ahmad Sa’adat and Samidoun: freeahmadsaadat.org, samidoun.net.