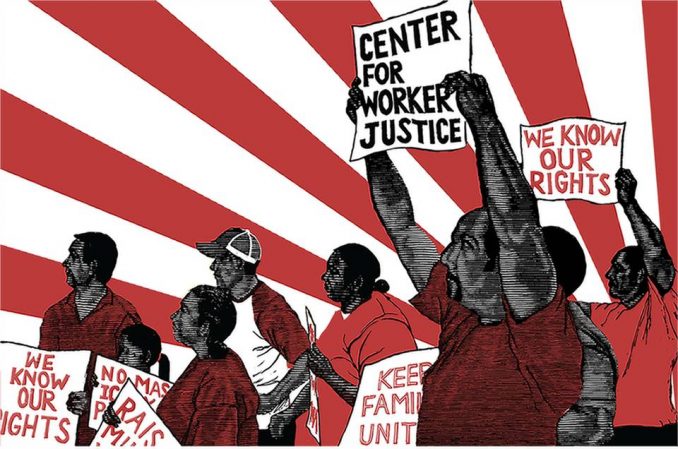 Members of the Center for Worker Justice of Eastern Iowa (CWJ) hosted a press conference and public demonstration outside the hospital on Dec. 15, charging Rimax with violations of state and federal law, including payroll fraud, misclassification, failure to provide check stubs, making unlawful payroll deductions and unlawfully retaliating against workers.

In June, Silvia Williams and four other construction workers were recruited by Rimax from Puerto Rico for drywall work on the new hospital. After a while Williams noticed that her paychecks did not reflect the hours she had worked. The nonprofit group CWJ, based in Iowa City, examined the statements and discovered evidence of payroll abuse by Rimax.

“Iowa law requires employers to provide workers with a written statement of hours worked, amount earned and any deductions made from their pay,” according to CWJ. The check stubs reviewed “list only a lump sum payment with no other information.” Rimax failed to pay Social Security and payroll taxes, and wrongly referred to employees as “independent contractors” when they were hired as hourly employees.

After realizing she was not the only one being affected, Williams raised these concerns to a Rimax manager. She was fired the following day. According to documents obtained by Workers World, Rimax told Williams to stay in Iowa City with the promise of moving her to a new job site. Yet Rimax cut off Williams’ housing payments, leaving her homeless while waiting for another job which has yet to materialize.

In a Dec. 1 letter addressed to Jason Miller, director of project management at the UI Hospitals and Clinics, CWJ President Mazahir Salih states, “Rimax made at least two deductions made from Silvia Williams’ pay without her written consent, including a deduction for the cost of two nights of her housing.” Such actions are prohibited by the National Labor Relations Act and the Iowa Wage Payment Collection Act.

When neither Rimax nor Minuti Ogle Co. Inc. (an Oakdale, Minn., company which hired Rimax as a labor broker) replied to the charges, CWJ filed complaints with the Labor Division and Misclassification Unit of Iowa Workforce Development.

It is important to note this is not the first time Rimax has been accused of violating workers’ rights. As reported by the Louisiana Record in 2015, a group of workers hired by Rimax in New Orleans filed a class action suit against the company, alleging they were not paid for overtime in violation of the Fair Labor Standards Act. Such abuses are quite common in Iowa, as they are just about anywhere in the U.S.

It was not long before a group of low-wage workers and allies in CWJ became involved, and have since championed Williams’ cause and that of her fellow workers.

CWJ Executive Director Rafael Morataya, a first-generation immigrant turned labor activist, told WW, “I know how difficult it is to leave your home and struggle to adapt to a new culture and language, the importance of finding allies and the damage that discrimination causes.”

Starting his work in the U.S. as a custodian, Morataya witnessed injustices in the workplace. “I decided I wanted to be the kind of person who stood up for dignity for myself and my co-workers, so I got involved in the union.”

As CWJ continues to fight on behalf of Williams and other Rimax employees, the group announced on Jan. 7 that they will continue defending the gains made by Iowa workers and others across the country last year.

Since the 2016 presidential election, to quote a CWJ press release from Dec. 27, “We have seen a spread of racism, xenophobia, and apathy for low-wage workers in our news and in our communities. With Trump’s coming presidency, there promises to be many struggles ahead for low-wage workers, people of color, and immigrants.”