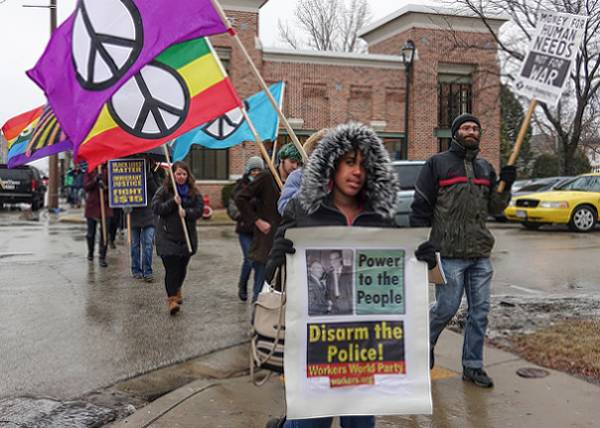 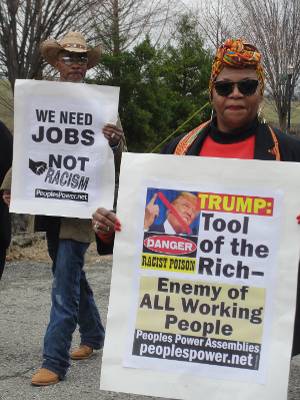 Fierce determination marked this year’s Martin Luther King Day actions. Those who rallied during the Jan. 14-16 weekend pledged a return to the radical legacy of the Civil Rights leader whom the day commemorates. They were galvanized by the right-wing, racist, sexist, anti-woman, anti-LGBTQ and anti-poor-people agenda of Donald Trump and his billionaire bullies. Gatherings ranged from big cities on the East and West coasts to small towns in the South. Labor activists united with community organizers, as anti-racist soccer teams and knitting groups marched side by side. Fight for $15 signs calling for the right to unionize and a higher minimum wage were held up together with LGBTQ rainbow flags. There was dancing, direct action, civil disobedience, and continuing defiance of state police terror and police brutality. The dedicated, creative, angry and inspired leadership of young Black and Brown people was present everywhere, fighting for survival and self-determination and reclaiming King’s Day.

In New York City, NYC Shut It Down, People’s Power Assemblies and Why Accountability reclaimed the radical legacy of Martin Luther King Jr. on Jan. 16. Their march was an extension of #PeoplesMonday, a series of militant street marches organized by NYC Shut It Down every Monday for the past two years. Each march tells the story of a person of color murdered by police or vigilantes.

The Monday of MLK Day focused on Renisha McBride, a 19-year-old Black woman murdered in a white suburb of Detroit while looking for assistance after a car accident.

The action also drew attention to the ongoing gentrification of central Harlem. Since 2000, the white population of Harlem has increased more than seven times, while the Black population has declined by more than a third. Marchers paused in front of Corner Social, a gentrifying restaurant whose staff assaulted #PeoplesMonday protesters two weeks ago. Statements made by the owner justifying the attack were read aloud and refuted with quotes from Martin Luther King. Community pressure has forced Corner Social to remove its racist dress code, a deliberate attempt to exclude Harlem’s Black working class.

Police responded to the march aggressively, shoving people out of the streets and arresting two people. These two were later released with minor charges into a large crowd of cheering supporters. Community response to the march was overwhelmingly positive. 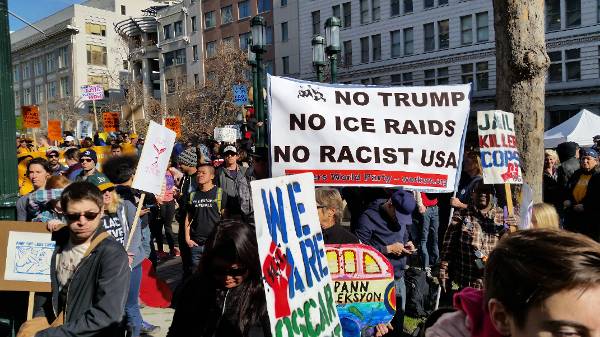 The Anti Police-Terror Project of Oakland, Calif., held its third annual March to Reclaim King’s Radical Legacy on Jan. 16. The march kicked off 120 hours of direct action leading up to Jan. 20 Counter-Inaugural, anti-Trump protests. Organizers emphasized: “This year we are focused on immigrant rights, protection of our Muslim brothers and sisters, women’s reproductive rights, loving our LGBTQ sisters, brothers and siblings, and the defense of Black life.”

A large contingent of youth marched in and, together with people of color, led the march, which went several miles, up Telegraph Road across 27th Street to Grand, ending at Lake Merritt, where another rally was held.

People were asked to bring drums and grills there, in response to the harassment of Black drummers and barbequers at the lake by white gentrifiers, complaining about so-called noise. 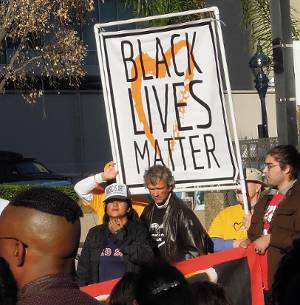 This year, in response, San Diego activists and unionists called for a truly grassroots peoples’ gathering and rally to honor the great civil rights leader in the spirit of his struggle oriented life. On Jan. 16, they marched in labor-community solidarity though the city’s downtown. Then they rallied together at the city’s Civic Center, affirming that a powerful fightback against racism, police brutality, homelessness, militarism and the Trump agenda was the top priority on the peoples’ agenda.

About 8,000 people attended the 35th annual Martin Luther King Day march and rally in Seattle. Speakers and marchers from dozens of labor, community and student organizations emphasized the importance of staying active throughout the year against the incoming Trump regime. Several speakers strongly condemned the building of a new youth jail in the Black community. Marchers chanted “Black Lives Matter!” against police brutality and said, “Refugees are welcome here!”