The repressive U.S. state apparatus that defends the dictatorship of the bourgeoisie over the multinational working class is doing everything in its power to keep the angry masses from coming out in the streets to reject Donald Trump — the new face of global capitalism — including Jan. 20, the day he is inaugurated.

Besides the police, Department of Homeland Security, FBI, CIA and more, the media play a big role in this apparatus. The mainstream press have historically and politically never been on the side of heroic resistance by the workers and the most oppressed because they have been controlled by big business interests.

If there were 5,000, 500 or even 50 activists marching on the socialist government in Havana, Cuba, demanding a capitalist system, you can bet your life that the bourgeois press would provide day-to-day coverage, interviewing activists and featuring their demands widely. This would be mainly because an attack against Cuba serves the interests of people like Donald Trump and Hillary Clinton.

As it stands, the bourgeois press were unwilling even to tell the general public that J20 Resist was selling affordable bus tickets to Washington, D.C. The press coverage on J20 organizing is consciously vague and sparse, drumming up acrimony against the protesters before the march even begins by painting pictures of resistance against Trump in D.C. as being potentially violent and pointless. The state is planning to shut down D.C. on J20 to keep out anti-Trump activists but not pro-Trump supporters.

This reflects the media’s overall strategy of silence toward the brutal murders of young Black and Brown people by police and the horrific brutality experienced by Indigenous activists at the hands of both cops and mercenaries at Standing Rock. The U.S. has more than 9,000 nuclear warheads in its arsenal to threaten the world and the most people in its prisons.

The ruling class has decided, correctly, that if the entire country and the rest of the world knew what was really happening in the heart of the empire, they would not stand for it much longer. Most bourgeois journalists would quite simply be out of a job.

While the media yawn at the mass resistance or blame Russia for Trump getting elected, the DHS has announced an unprecedented level of so-called “security” (aka violence baiting) around the J20 inauguration, aimed mainly at stamping out and mitigating a great potential level of resistance. This is a gross violation of the right to assemble and free speech under the U.S. Constitution.

The DHS has announced that buses will not be allowed to drop protesters off near Metro stations, not only in D.C. but in Maryland and Virginia as well. Instead, buses are supposed to drop off people near RFK Stadium, which is a 2-mile walk to the Capitol where Trump will be sworn in.

The Jan. 21 women’s march in D.C., mainly targeting Trump’s misogyny but also supported by Democratic Party forces, is not expected to face as much hostility and scrutiny compared to J20 when the whole world will see Trump take office. Close to 300 other J21 women’s marches will take place in every U.S. state.

Notwithstanding the high level of technological surveillance being used for J20, in the long run, intimidation will prove no match for the millions of furious people in the streets who will be ready to fight back beyond J20 against the increased volume of racism, sexism and anti-immigrant hatred the Trump regime will bring.
Fivek is a NYC organizer of J20. 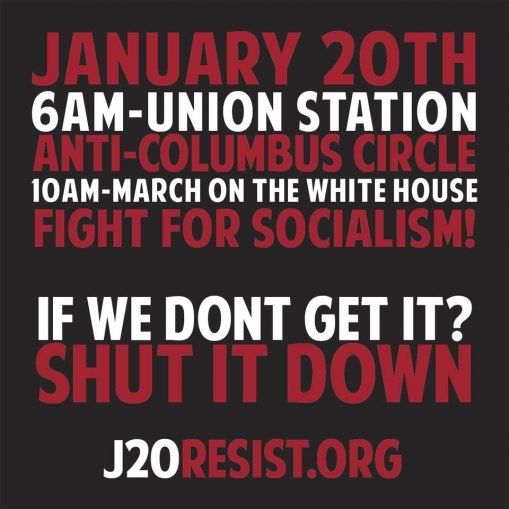