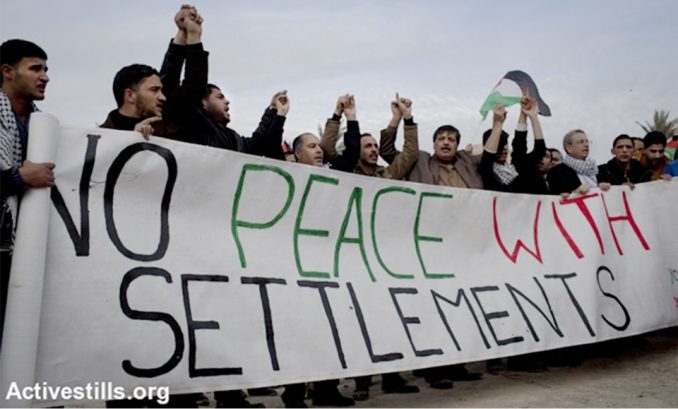 A United Nations Security Council resolution condemning illegal Israeli settlements only in the West Bank region of Palestine has sparked a flurry of recriminations between Zionist and world leaders. This has illuminated and deepened fissures within the Israeli settler state, the Zionist movement and imperialist supporters of the Zionist colonial enterprise.

Resolution 2334, which passed by a vote of 14-0 on Dec. 23 after a surprising abstention by the United States, found broad support from Palestinians.

Fatah leader and Palestine Liberation Organization Chairman Mahmoud Abbas called the measure “a slap in the face to Israeli policy.” A statement by Hamas spokesman Fawzi Barhoum welcomed it as a “significant transformation in international positions that support the Palestinian people’s rights.” (­maannews.com, hamas.ps)

Similarly, Dawoud Shehab, a spokesman for the Palestinian Islamic Jihad movement, hailed the resolution as “a Palestinian victory.” The Popular Front for the Liberation of Palestine, while also celebrating it, warned that “Israel and its allies will try to impede implementation of the resolution or call attention to parts of the resolution’s content related to terrorism, violence, and incitement, which can be harmful to the Palestinians.” (news.xinhuanet.com)

Many found the U.S. abstention notable. Palestinian-American author Ramzy Baroud wrote that “the U.S. neither vetoed the resolution nor threatened to use its veto power. Nor did it even seriously lobby, as it often does, to soften the wording in advance.” (arabnews.com, Dec. 27)

In Tel Aviv, the reaction was markedly different.

Israeli Prime Minister Benjamin Netanyahu immediately launched a broadside against the Security Council, downgrading Tel Aviv’s diplomatic ties with the twelve world powers that voted for the resolution. (Malaysia and Venezuela already had no formal relations with Israel.)

Netanyahu also alleged, “The Obama administration not only failed to protect Israel against this gang-up at the UN, it colluded with it behind the scenes.” (reuters.com, Dec. 24)

Then, only five days after the start of his diplomatic offensive against much of the world, including Israel’s foremost military and economic sponsor in Washington, Netanyahu found himself under investigation on longstanding allegations of bribery and fraud. He has since undergone two rounds of questioning by Israeli police.

‘Most extreme elements of the settler movement’

Many Zionist leaders, linked to 19th- and 20th-century social-democratic trends that dominated the colonial enterprise’s origins, had warned for years of emerging breaches between Israel and its social base in world Zionism, as well as with its imperialist sponsors like the U.S. and the European Union.

Since 1977, when Likud won its first parliamentary election, breaking the social-democratic Labor Party’s 29-year stranglehold on Israeli politics, subsequent governments, led by both parties and their parliamentary allies, have continued maximalist expansionism and military aggression toward both occupied Palestinians and neighboring countries with few noticeable differences.

In fact, it was a Labor Party government that sponsored illegal settlements in the Palestinian West Bank and Gaza Strip, Syria’s Golan Heights and Egypt’s Sinai Peninsula — all of which Israel occupied in 1967. The Labor Party cultivated generations of fanatical settlers and laid much of the groundwork for Likud’s later political infrastructure.

After the Nakba — the genocide of more than 750,000 Palestinians — in 1948 and the Naksa — the expulsion of over 400,000 more and seizure of vast Arab territories — in 1967, social-democratic coalitions led by the Labor Party oversaw some of Israel’s bloodiest military operations, including its 2006 offensive against Lebanon and 2008-09 massacre in the Gaza Strip.

The two parties’ differences stem rather from the orientation of the Labor Party and its allies toward the international community and its expectations, as opposed to Likud’s embrace of unapologetic bellicosity.

Since the signing of the first Oslo Accord in 1993, world powers have pushed Israel to accept even the semblance of a “peace process” that might someday result in a “two-state solution,” or the partition of historic Palestine between its indigenous Palestinians and the Israeli settlers.

For many sponsors of Israel, like the U.S., this would offer them a fig leaf of respectability among Arab and Muslim allies, despite their open support of these countries’ foremost enemy.

Now, much of the Zionist movement, which finds itself hemmoraghing support, longs for an end to the protracted crimes it has spent decades defending.

But since his last election in 2015, Netanyahu has overseen the most extremist governing coalition in Israeli history, based among fanatical West Bank settlers and dominated by politicians who openly desire ethnic cleansing and genocide of Palestinians.

Today, Netanyahu finds himself between two irreconcilable sets of demands.

Any steps he can take to reinforce Likud’s support and fend off political challenges, both within his coalition and from the Labor Party and its allies, will further Israel’s international isolation.