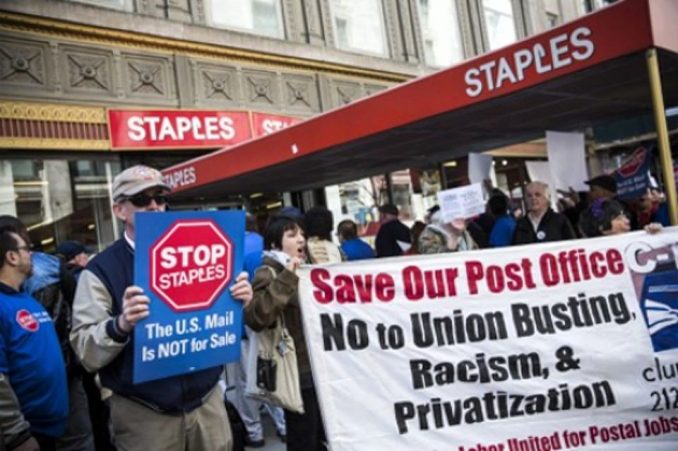 A contingent of Citizens Labor United for Postal Justice demonstrate at a Staples in New York City in 2014, joined by members of the Peoples’ Power Assemblies.

Five years ago the Postmaster General began a series of moves aimed at the step-by-step privatization of the Postal Service, the country’s largest unionized employer. One such action was a 2013 program to farm out postal window services to so-called “postal counters” at 500-plus Staples office supply stores.

The American Postal Workers Union swung into action with an ambitious campaign to beat back the Staples challenge. The APWU used many strategies, from a nationwide boycott, internet organizing and mass demonstrations at Staples stores to legal actions, USPS Inspector General investigations and National Labor Review Board appeals.

Union activists organized a mailing of 100,000 postcards to the company CEO, attended stockholders’ meetings and intervened to help scuttle Staples’ proposed $5.5 billion merger with Office Depot. The two biggest teachers unions, AFT and NEA, acting in solidarity with the postal workers, saw to it that Staples’ substantial revenue from the sale of school supplies suffered a drastic cut.

The Postal Service informed the union on Jan. 5 that its scab partnership deal with Staples was finished, effective the end of February.

The union, in its victory statement, announced that the Staples boycott was over and that “the U.S. Mail is not for sale!”

“This is a big win,” said APWU President Mark Dimondstein. “Staples is out of the mail business. This is also a big win for those who care about their neighborhood post office, and for all those who think that workers should earn a fair living wage with decent health care and a pension, rather than the Staples’ model of minimum wage, part-time hours and no benefits.” (Daily 202 Newsletter, apwu.org)

“If Staples was going to take our work and jobs for their private profit, we were going to hit back and affect their bottom line,” Dimondstein said. He added that  not only is this a victory over Staples, but it will affect USPS plans to privatize retail services using other corporations. “Those companies,” he noted, “have largely backed-off and gotten the message — mess with postal workers and our customers and you will have to tangle with the APWU family.”

Dimondstein thanked the many Stop Staples activists who worked day-in and day-out to see this struggle through for “a job well-done,” adding,  “This victory helps strengthen and steel us for the battles ahead.”

Walsh is a retired letter carrier with the Postal Service in California. This article also appeared in the Voice of the Golden Gate Letter Carriers.