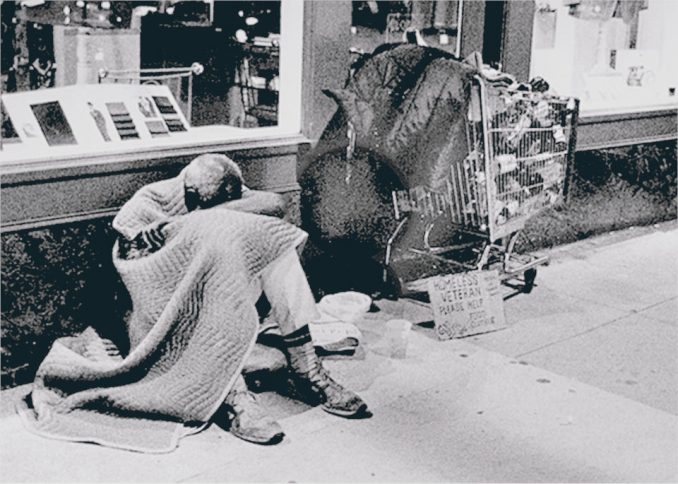 Durham, N.C. – I arrived at the Durham Co-op Market the morning of Jan. 2, 2017, for coffee and to finish some writing. As I approached the market’s front door, a middle-aged Black man standing on the side of the building stopped me and asked for “spare change.” Little did he know, I was four days from pay day and had absolutely no money. I was living on a credit card for the next four days. I told him I was out of cash and kept walking.

As I entered the sliding glass doors, one of the cashiers asked, “Is that man still out there asking for money?” I said, “Yes, but he’s not posing a threat to anyone. He’s just standing on the side, asking for spare change.” She then informed me that she had already spoken with him once that morning and that the manager had instructed her to call the police.

I said, “Sis, please do not call the police. You call the police and that man could lose his life just for asking people for ‘spare change’ this morning.” There were customers standing in line, but I was very adamant about not calling the police, because, as I shared with her, “That’s exactly how Black lives become hashtags.”

In reality, she was just doing her job, as she was told. My job, however, was to speak up for the poor (and possibly, to save that man’s life). The last thing we need here in Durham is another Frank Clark or Jesus Huerta [both murdered by police]. I said, “Look, don’t call the police. I’ll go out there and talk to him.” So I did.

I walked out by the dumpster and said, “Yo, bro. They’re about to call the police on you. I’m sorry, but you can’t stand over here.” I suggested he switch location to the convenience store across the street. He said, “Nah, man. I can’t.”

I apologized to him for not having anything to give, except the 72 cents that was buried among lint in my right front pocket. When I reached out to give him spare change, he said, “Brother, I don’t want to do this. I used to be a working man. I still have my pride, you know. My VA [Veterans Affairs] check doesn’t get here until the 5th. I’m only asking for spare change because this is the only option I have right now. I tried to get a job in there, and other places around here, too. No one’s hiring homeless Black veterans right now.”

How veterans are viewed and treated

I shared with him how I too was homeless at one time — slept in my car for a week before Camryn and Earnest Smith, thankfully, opened up their home to me while their daughter was away in college. I informed him that I too was a veteran, and someone who had been charged with a felony.

I went inside the market and fixed him a warm to-go plate of stewed chicken, beans and rice, cabbage and half a sweet potato. I asked if he wanted to come inside and sit down with me, but he was worried that he might be recognized. I insisted again, but realized the best thing to do was to respect his concern. I brought the food out and fought back my tears.

For those who think poor people are “lazy” and do not want to work, please, stop! When you live in poverty, each and every day is “hard work.” The hustle. The grind. The mental and emotional strain, just to eat. Trust me, I can tell you from personal experience, there’s nothing “lazy” about surviving poverty, especially when you’re a descendant of the same people whose free slave labor was responsible for building this empire.

Poor people are not stupid. They’re not criminals. They’re not “welfare queens.” They’re not any of those things. They’re human beings who live in a society where jobs are drying up and opportunities can, sometimes, be nonexistent.

With all of the new “gentrification” money that’s here in Durham now, there has to be something that we can do for poor folk besides criminalizing them. You don’t call the police on someone because they’re poor. You ask them how you can help and be a blessing.

Lilly was the 2016 Workers World Party vice presidential candidate. In 2015, he was an Indy Week “Citizen Award” winner for his activism and journalism. Follow him on Twitter @LamontLilly.