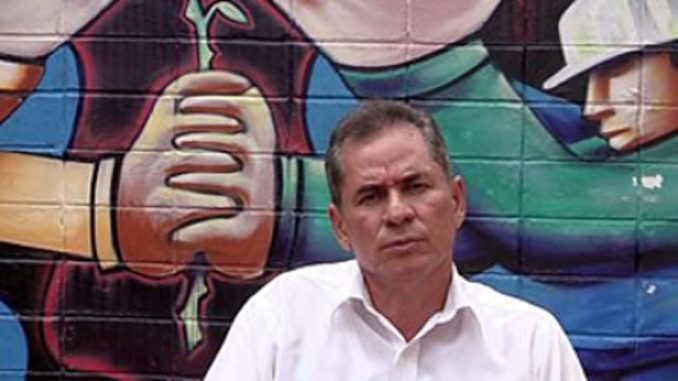 The North American Committee for the Defense of David Ravelo asks Workers World readers to sign the following open letter to Colombian President Juan Manuel Santos and call for Ravelo’s freedom. The committee will deliver the letter and the names of signers to Colombian officials in mid-January. The letter to Santos details the legal irregularities and his frame-up. The letter explains the urgency of this appeal: “Ravelo is emblematic of thousands of political prisoners in limbo now as Colombia implements a peace accord. Imprisoned combatants and civilian political prisoners may soon be eligible for amnesty. Ravelo must be one of them.”

To endorse it, pleased email your name, city, state or province, and country to W.T. Whitney at [email protected] As a follow-up to its solidarity delegation to Colombia in 2012 on behalf of Ravelo, the committee is circulating this letter as part of the international campaign to free him.

The case against prisoner David Ravelo collapsed long ago under the weight of lies and a misbegotten prosecution.  Only an imaginative writer of fiction could pass off as plausible the vengeance and bizarre legal proceedings he’s been subjected to.

Ravelo was arrested on Sept. 14, 2010, in Barrancabermeja, Colombia. Charged with plotting to murder municipal official David Núñez Cala in 1991, he is serving an 18-year term. Appeals have failed. His case is now before the Inter-American Commission on Human Rights.

Barrancabermeja, on the Magdalena River, came into existence along with development there of oil-processing facilities that now produce 60 percent of Colombia’s oil products. The local oil workers’ union is a famously militant one, and leftist ferment has been constant. In the late 1980s, for example, the Patriotic Union (UP) electoral coalition entered local politics. Soon killers were targeting UP activists in Barrancabermeja, and nationally.

In the early 1990s, David Ravelo was a UP member of Barrancabermeja’s City Council and a delegate to the Santander Assembly. Charged with rebellion in 1993, he went to prison for 27 months.

For 35 years, Ravelo was a labor organizer, community educator, journalist and defender of human rights. He joined the Colombian Communist Party’s Central Committee.

Jaimes confessed to organizing the massacres of 1998 and 1999 in order to qualify for the Justice and Peace Law.  According to that law, paramilitary leaders telling the truth and demobilizing troops would serve eight years in prison. In 2008, Jaimes confessed to the Núñez Cala murder and named Ravelo and ex-Congressperson Arístides Andrade as accomplices, adding that, at a meeting in Barrancabermeja, they participated in planning the murder. The accusations were aimed at fortifying his case for entry into the Justice and Peace program.

His paramilitary associate Fremio Sánchez also confessed to the massacres and to his own role in the Núñez Cala murder. He too implicated Ravelo and Arístides Andrade in order to qualify for the program. He was not accepted.

When Jaimes Mejía killed Núñez Cala, he was a FARC [Revolutionary Armed Forces of Colombia] member; he joined the paramilitaries later. Claiming that Ravelo had ties to the FARC, he showed investigators a 1985 photo of Ravelo attending a peace meeting with FARC leaders at a forest encampment. Authorities had used the old photo to put Ravelo in prison in 1993. Ravelo went free once the “Ravelo” in the photo was shown to be someone else, a journalist.

Ravelo’s case rests on multiple assaults on the truth. Here’s one: a local prosecutor dismissed allegations against him in 2008. Later, the national attorney general transferred his case to an “anti-terrorism prosecutor” in Bogotá. That prosecutor, William Pacheco Granados, was a criminal.

As a police lieutenant in 1991, Pacheco arranged for the “forced disappearance” of a young man. A military court convicted him; he spent a year in prison. Law 270 of 1996 prohibits anyone dismissed from “any public office” or convicted of a crime from joining “the judicial branch.” Now Pacheco Granados faces civil prosecution for murder.

Another assault: Colombia’s attorney general on Aug. 20, 2014 accused Jaimes of lying when he accused Ravelo and Andrade of complicity in the murder. A judicial unit specializing in false witnesses is investigating. However, between May 26, 2015, and Oct. 27, 2016, six scheduled court sessions were canceled.

A third: Jaimes’ criminality seems limitless. He arranged for journalist Yineth Bedoya to be kidnapped before she was to interview him in prison in 2000. She was beaten and raped.  Jaimes received a 28-year sentence and was removed from protection under the Law of Peace and Justice.

Body parts discovered in the sewers of La Modelo prison have been connected to Jaimes’ order to “disappear” fellow prisoners.  He’s accused of ordering the killing in 2003 of a school head in Barrancabermeja and committing aggravated assault from prison against a Barrancabermeja businessman.

Four, Jaimes Mejía bribed fellow prisoners to testify that Ravelo and Arístides Andrade attended the murder-planning meeting. Witnesses at trial sessions in 2011 and 2012 testified that Jaimes used prisoner Fremio Sánchez to recruit them. Their contradictory testimony indicated to Ravelo that they “didn’t know who he was.”  Officials facilitated meetings at which Jaimes and Sánchez conspired against Ravelo. A jailed lawyer, advising prisoners, testified to the collaboration.

Five, none of Ravelo’s 30 defense witnesses were allowed to testify during the trial proceedings. Prosecutor Pacheco closed his pre-trial investigation without hearing testimony as to Ravelo’s innocence.

Six, four weeks elapsed between Ravelo being convicted and the announcement of his conviction on Dec. 11, 2012. The delay impeded preparations for Ravelo’s appeal and was “a flagrant violation of due process.”

Lastly, the atmosphere surrounding Ravelo’s trial was hardly favorable for securing justice; “family members and members of Ravelo’s CREDHOS organization continually suffered paramilitary death threats and harassment while the trial was in progress.”

Ravalo summarizes: “The paramilitaries had ‘reasons’ for wanting to eliminate me. That’s why … they tried to assassinate me physically, but didn’t succeed. They decided to eliminate me judicially, and for that they implemented ‘the judicial façade,’ using the lie as their favorite weapon. It’s clear, therefore, that the truth is the first victim of war.”