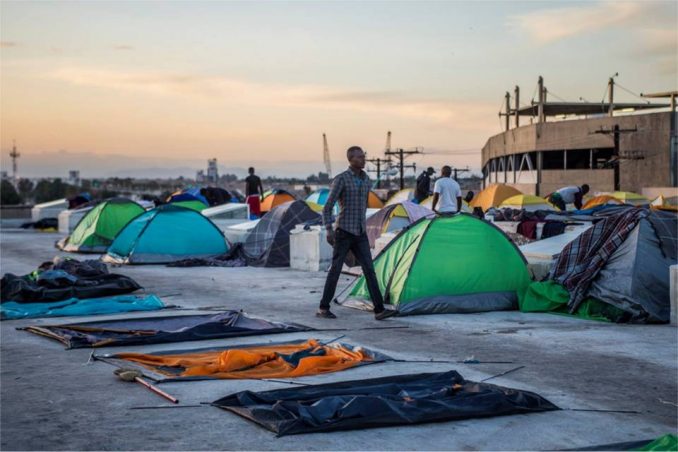 Haiti refugee shelter on a building rooftop in Tijuana.

On visits from San Diego to Tijuana, Mexico, I was able to learn from Makeda Makossa and Professor Wilner Metelus about the serious humanitarian crisis facing more than 5,000 Haitian and African refugees stranded in Tijuana as they attempt to seek asylum in the United States. The two activists pointed out the horrors facing the refugees and the efforts to assist them.

Makeda Makossa is the heroic founder and developer of San Diego’s World Beat Center in the city’s historic Balboa Park and of the Casa del Túnel across the border in downtown Tijuana, Mexico. Both are important progressive venues in their respective cities.

The two facilities’ cultural activities attract many youth of color, and they are frequently the sites for important political events, most recently the touring photo exhibit that honors Fidel Castro at the WBC, and a Haitian art exhibit in celebration of International Migrant Day at the Casa del Túnel. Makeda has fought tirelessly and successfully to keep both centers open in the face of resistance from local reactionary forces.

Recently, Makeda has devoted much time and effort to raising awareness about the serious humanitarian crisis just over the border in Tijuana. She makes frequent trips to Tijuana’s Casa del Túnel-Cultural Arts Center, where she recently made contact with some of the 5,000 or more Haitian and African refugees stranded at the border with few resources but holding on to the hope of being able to cross into the U.S. eventually.

She transports much needed food, clothing, blankets, sleeping bags, toys and other needed supplies donated by individuals and organizations on this side of the border.  Making that journey is no easy task. She has to pass through a highly militarized border, coming and going, and many times her van is subjected to searches and scannings, which means a lot of wasted time spent waiting. 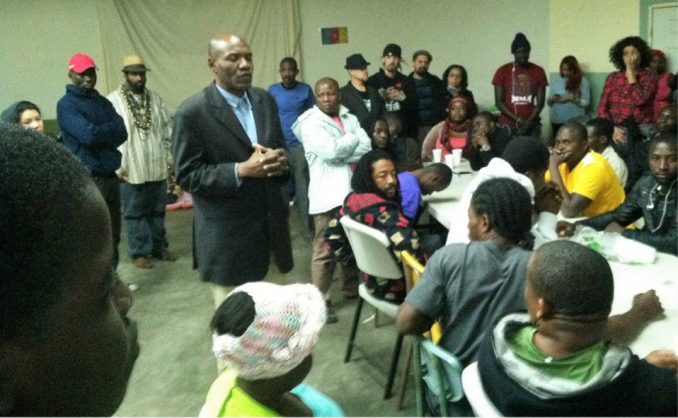 My first trip to Tijuana with Makeda and the WBC family was on Dec. 17. We visited a Haitian art exhibit celebrating International Immigrants Day at the Casa del Túnel.  Bernice and I went by car, while Makeda and Micheline drove a van full of the supplies needed to prepare a Haitian feast for the evening celebration, which was a special tribute to all the workers and organizers supporting the Africans and Haitians in Tijuana.

Micheline St. Louis, aka Queen Nyanza, presented a musical performance and prepared a delicious Haitian meal. Professor Metelus, president of the Comité Ciudadano de Defensa de los Naturalizados y Afromexicanos [Citizens’ Committee in Defense of Naturalized and Afro-Mexicans] was the special guest speaker. Professor Metelus and Makeda both expressed how important it is that people on both sides of the border unite in pursuit of justice for the refugees.

After the program of music and words of gratitude and solidarity to the people of Tijuana for welcoming and embracing Haitian and African migrants, there was food for everyone at no cost.

Our second trip together was on Dec. 21 for a special ceremony for Professor Metelus at one of the hostels hosting Haitian migrants. There were about 50 men, women and children, including babies.

My hosts explained to me that this shelter, which is located at a church, is one of the better facilities because it has two bathrooms with showers, a kitchen for food preparation and everyone sleeps inside. There is a courtyard for exercise, play and other activities. It is so important for people who are living under much stress to have something to do for entertainment.

Professor Metelus asked that everyone follow the rules of the hostel. He also urged them to avoid getting involved in any of the extralegal activities that occur in the neighborhood.

A warning to refugees

He also warned: “You might have the idea to cross [the border] through the desert. Do not do it because it is very dangerous. Here in Mexico there are good brothers and sisters. You can find a job. At least the people here will insure you have food every day.”

Professor Metelus was on a 15-day tour to inspect the shelters in Tijuana so that he could corroborate the many complaints about them. People told him that the present services provided to the Haitian and African migrants are totally inadequate. They include bedbug-infested facilities, insufficient food, unsanitary bathrooms and a lack of electricity.

For example, in one hostel with a capacity of 60 people, he found up to 500 Haitians. Some of the hostels are roofless, or located near dumpsters, and women and children share space with unrelated men. 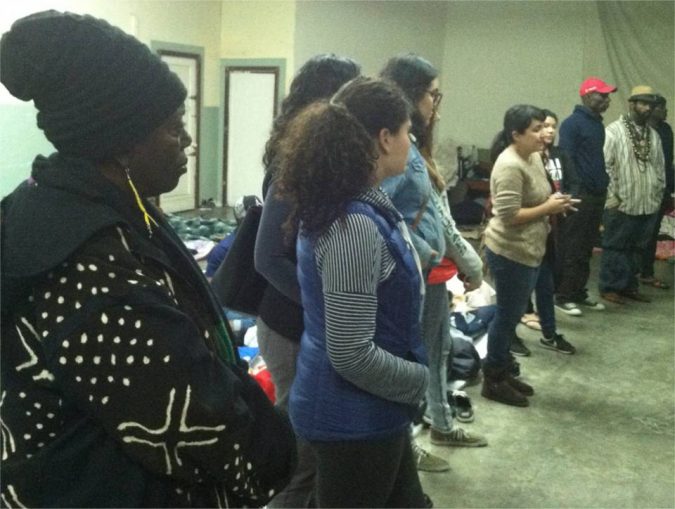 Makeda Makossa and other supporters from the U.S. and Mexico with the Haitian migrants at the shelter.

On my third visit to Tijuana on Dec. 22, I had the opportunity to ask professor Metelus a few questions.

Gloria Verdieu: Where are you from?

Professor Metelus: I’m from Gonaïves, Haiti, but I live in Mexico.

GV: How many Haitian migrants are there in Tijuana?

PM: Over 5,000 have shown up. That is the registered number, but there are many more. There is an urgent need for help for this migration crisis.

GV: How many shelters are there in Tijuana?

PM: There are 35 shelters total. Hundreds of Haitian and African migrants continue to be sustained in overcrowded shelters in Tijuana, experiencing inclement weather and the lack of resources. I have visited many shelters, one located in El Alacrán, an impoverished neighborhood away from the city center.

The Mexican authorities are relocating migrants of African descent to shelters in areas like this, plagued by lack of food, care and hygiene. I was deeply shocked [by what I saw] and sent a message with requests for the governments of Mexico and the United States to do something.

Some Haitians are being committed to rehabilitation centers, saying that they are mentally ill.  This is not true. They are being placed in these centers because they have no place else to put them.

GV: How did the Haitian migrants get to Tijuana from Haiti?

PM: They did not come directly from Haiti. They came from Brazil or Colombia, for example. They came by foot, by bus — encountering corrupt police — lots of money paying guides — predatory smugglers — robbery, rape, murder — finally reaching Tijuana only to be housed in shelters not prepared or equipped for this influx.

Seeking relief from the dire political and economic situation of their country, thousands of Haitians left the island in search of a better life in Brazil, a country that has one of the most open borders and that offered them refuge after the 2010 earthquake. Yet, for several months now, for lack of work and opportunity, more and more Haitians are starting the journey north, with backpacks and knapsacks and children in tow, crossing no less than 10 countries before reaching their desired goal, the USA.

GV: Are there more women than men? What are some of the issues that the women face?

PM: Definitely more men. … It is not good that men and women be housed in the same space. Not good for the women or children, not good for families.

GV: What can we do to help?

PM: Let people know what is going on. Bring people to Tijuana to see for themselves what is happening. This is a crisis. African Americans should join in making an appeal to the U.S. government to take some action in regards to this crisis. Join the efforts of Makeda … and help the Haitians to become self sufficient, to get jobs and begin their lives where they are.

I also spoke with some of the refugees. One young Haitian man told me how he fled to Brazil following the 2010 hurricane, which devastated many Haitian communities, making normal life there next to impossible. At first, he said, there were programs in Brazil for the refugees, including job offers, and they were welcomed. But the economic situation changed and he had to head north with many others, their goal being the U.S., a three-month journey.

He was surprised and saddened when he heard that the U.S. was turning refugees away, since the U.S. government knows how bad things are in Haiti. Makeda offered to try to help this young man settle in Tijuana, as she also did many others, stressing that winning the right to cross the border legally might take a long time, if ever. The projects she is working on will provide jobs in Tijuana for some of these desperate people.