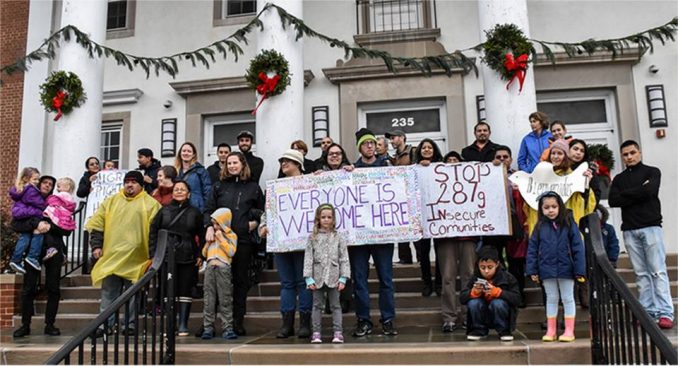 December 18 is recognized by the United Nations as International Migrants Day to spotlight the need for safe, orderly and protected movement of refugees and migrants in an era of global war and economic crisis.

Despite rain, over 30 people rallied and marched on Dec. 18 in Norristown, Pa., a city of 34,000 people, of whom 26 percent are Latinx. (city-data.com) According to Carmen Guerrero of the Coalición Fortaleza Latina Pennsylvania, the “Celebración el Día Internacional del Migrante” was taking place in Norristown because this Philadelphia suburb had the “second highest number of deportations in the U.S. in 2015.”

Norristown is a 287(g) city, the opposite of a sanctuary city. Instead of refusing to use municipal funds or resources to enforce unjust national immigration laws, Norristown police and officials work as if they themselves were official Immigration and Customs Enforcement agents. The 287(g) program instituted by ICE allows state and local law enforcement entities to enter into a partnership with ICE under a joint memorandum of agreement. (www.ice.gov/287g)

One of the speakers at today’s rally gave an example of how ICE and Norristown cops work together. She reported an incident in which, just eight minutes after being picked up by local police, a migrant worker who had not committed any crime was being threatened with deportation by ICE agents. Norristown is an example of why the movement to declare universities, towns and other locations as sanctuaries for immigrants is so important.

With many wearing raincoats and carrying umbrellas as well as signs, the crowd of immigrants and their supporters included eight children. They marched from the Norristown Municipal Building to the Montgomery County Courthouse, chanting “¡Sí, se puede!” A final rally there ended the event, but not before everyone gathered together for a group photograph.