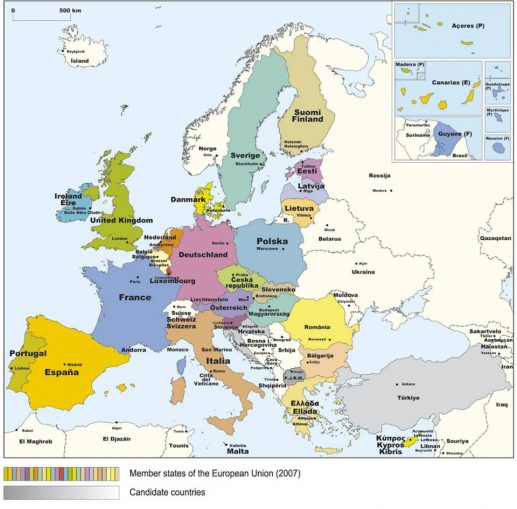 The European Union faces challenges to its existence.

At least three major countries in the EU — France, the Netherlands and Germany — have national elections scheduled for 2017.

In France, the National Front (FN) is a far-right party that may well reach the second round of next year’s elections. While the FN’s openly fascist appeals have been muted, it still actively takes on the issue of rejecting refugees and other far right initiatives. It has made it clear that if its candidate — most likely Marine Le Pen — becomes president, she will call a referendum on France remaining in the EU.

The Alternative for Germany (AfD), a burgeoning new right-wing party in Germany, is also calling for departure from the EU. AfD is not as strong in Germany as the FN is in France. Netherlands Islamophobic Party of Freedom leader Geert Wilders says he wants to leave the EU. Polls say his party will come in first in the March election.

In forming today’s EU, the rulers of 28 distinct states with 24 official languages agreed to follow EU rules, which might limit local sovereignty, to allow the free exchange of goods, services and capital. In doing so, they created the world’s second largest internal market and added significant profits for all the national bourgeoisies involved in this project. The EU bureaucracy also strengthens the role of German and French-based banks.

Since the early 1990s, workers have moved freely in the EU countries. Currently, 14 million people in the EU work in countries other than their own, and there has been a substantial movement of workers from low-wage countries, for example, Poland, Bulgaria and Romania, to countries like Britain, France and Germany. Some EU citizens live in one country and work in another.

The racist, xenophobic, UK Independence Party exploited xenophobic hostility to this movement of workers to promote the “yes” vote on the Brexit referendum. This happened even though the expanded workforce aids the English bourgeoisie to keep their tourist and construction industries going with millions of hires from Eastern Europe.

UKIP and the other European right-wing parties that oppose the EU also focus on attacking refugees. Over a million people came to Europe in 2015, claiming refugee status. From January to September 2016, 303,000 people came to Europe, according to the U.N.’s High Commissioner on Refugees. Of them, 60 percent were men, while 17 percent were women and 24 percent children.

The reason for the big drop in numbers between 2015 and 2016 is that in 2015, hundreds of thousands of people used the shorter, less expensive, much safer route between Turkey and the Greek islands, such as Lesbos. In March 2016, the EU and Turkey agreed to a deal that made crossing between Turkey and Greece much less attractive.

U.S. imperialism’s support for the overthrow of Bashar al-Assad in Syria, its interventions in Libya, Iraq and Afghanistan, and the ensuing violence are all driving refugees to Europe. So too have been the famines that have followed drought in the Sahel, the area of Africa immediately to the south of the Sahara, a crisis exacerbated by climate warming.

The desperation to reach Europe can be seen in an incident Dec. 9 in Ceuta, on the Moroccan-Spanish border. Ceuta is an enclave that is legally Spanish — and thus EU territory — located on the Moroccan coast on the African continent. Migrants who reach Ceuta (or nearby Melilla) can appeal for asylum in Spain.

About 800 people suddenly began climbing the 12-foot-high barbed and bladed wire fence surrounding Ceuta. Some 438 succeeded, climbing over the bodies of those who lay across the top of the fence. Some 49 were treated in a Ceuta hospital for injuries. None died this time.

Solidarity from workers in France

Meanwhile, throughout France the FN held protests in towns and small villages where the French authorities had resettled refugees who had gathered earlier in an area called “The Jungle” near Calais in northern France near the tunnel to England. These protests were obviously part of the FN’s presidential campaign.

Nearly all these FN protests were confronted by counter demonstrations expressing the solidarity of French workers with these refugees seeking asylum in France.

One of these confrontations well covered in the French media involved Marion Maréchal Le Pen, an FN delegate in the National Assembly. This delegate is the niece of the FN’s leader Marine Le Pen and a leader in the right wing of the FN. She called for a demonstration in her election district at the Tour d’Aigues to oppose the resettlement of refugees from Calais.

This racist protest drew 150 people, according to a local paper, Vaucluse Matin (Oct. 25), but a local progressive coalition was able to draw 300 to 400 anti-racists. The gendarmerie, France’s national police force, was called out to keep the two groups separated.