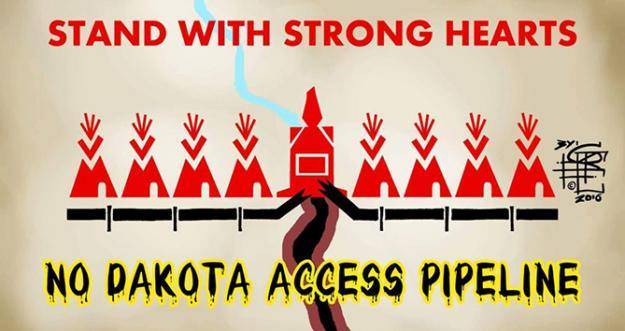 Dec. 19 — Indigenous peoples and supporters continue their encampment in brutally cold and harsh winter conditions at Cannonball, N.D., to stop the Dakota Access Pipeline from being built under the Missouri River. The Oceti Sakowin (Seven Council Fires of the Great Sioux Nation) rightfully fear the pipeline could rupture, as others have recently across the U.S., and poison the river for at least the 17 million people who rely on it for their drinking water or livelihood.

The camps at Standing Rock remain despite the Dec. 4 announcement by the U.S. Army Corp of Engineers that it had denied the easement permit for Energy Transfer Partners, co-owner of the pipeline, to start drilling underneath Lake Oahe on the Missouri River. The camp members are staying vigilant against governmental, law enforcement and corporate goons who have attacked peaceful water protectors many times in unsuccessful attempts to get them to leave so drilling can proceed.

The Oceti Sakowin camp is now called the All Nations camp. “We wanted to let the world know our status and to address the many rumors that have been causing confusion and fear on the internet,” Chase Iron Eyes stated live in a Facebook video Dec. 10. “Our numbers are around 1,000 in the newly named All Nations camp, with 300 in the Rosebud Sicangu Camp and well over 1,000 in the Sacred Stone Camp.” (nativenewsonline.net, Dec. 11) Iron Eyes is an activist attorney, a member of the Standing Rock Sioux Tribe and co-founder of the Native-American news website Last Real Indians.

Meanwhile, every day in December is a #DefundDAPL day of action. As of this writing, defunddapl.org reports that nearly $27 million had already been divested from banks and financial institutions financing the pipeline project. The four biggest (“primary leaders of the key DAPL loan”) are Citibank (Citigroup), TD Securities, Bank of Tokyo-Mitsubishi UFJ and Mizuho Bank. Others funding the DAPL include Wells Fargo, Comerica, PNC, Barclays, JPMorgan Chase, Bank of America and Goldman Sachs.

Organizers emphasize the importance of the divestment campaign: “The financial footing of the Dakota Access Pipeline is in jeopardy if they do not complete the project by Jan. 1. If this deadline is missed, a majority of the stakeholders with contracts to ship oil through the pipeline will be able to renegotiate or cancel their ­contracts.”

(See defunddapl.org for a complete list of banks and lenders as well as information and ideas on what to do to show solidarity with the Standing Rock ­encampment.)

The first jury trials of water protectors who have been arrested are scheduled to begin today. According to the Morton County Sheriff’s office, 571 protesters have been arrested in the last four months. (bismarcktribune.com, Dec. 15)

On Dec. 14 a court petition was filed by 10 North Dakota and Minnesota lawyers and organizations requesting that out-of-state attorneys be allowed to help handle the cases in order to guarantee defendants’ constitutional rights to counsel of their choice.