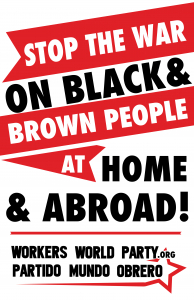 Clamor against the Russian Federation has reached a crescendo, with the corporate media blaming Russia for “interfering with the U.S. election.” Commentators, pundits of every stripe and Hillary Clinton have called for investigations, more sanctions and even “cyber warfare” attacks against Russia, blaming that country for the election of racist demagogue Donald Trump.

The New York Times and Washington Post have led the charge, citing CIA sources that say Russia released hacked emails from the Democratic National Committee and its head, John Podesta, to WikiLeaks, to support Trump’s candidacy. But no evidence of this has been presented. WikiLeaks denies the leaked emails came from Russian hackers.

The Rev. Jesse Jackson pointed to the true cause of this electoral catastrophe: “The Russians didn’t do it. It was done by right-wing partisan state officials eager to suppress the vote of people of color, the young and the working poor. These efforts were open, systematic and widespread. And this domestic hacking at our elections was far more destructive than the hacking Russia is said to have done.” (rainbowpush.org, Dec. 12)

Every gain for the workers and oppressed won since the New Deal and the Civil Rights struggle is on Trump’s chopping block. His speeches and tweets have targeted unions, the minimum wage, Social Security, Medicare, Medicaid, voting rights, anti-discrimination regulations for housing and education, environmental protections and a lot more. His billionaire and racist militarist appointees make the same threats.

With the righteous outrage over Trump winning the presidency, despite losing to Clinton by nearly 3 million votes, it is understandable that many workers and poor people desperately hope that by blaming Russia for the election results, Trump will be stopped from inflicting great suffering on their lives.

But it was not the publication of DNC or Podesta emails that weakened Clinton’s campaign. It was their content. They confirmed what many people, including Bernie Sanders’ supporters, suspected — that the DNC “tipped the scales” of the primaries in favor of Clinton, assisted by some members of the establishment media.

These emails also exposed Clinton’s cozy relations and warm words to Wall Street financiers during her highly paid, secret speeches to them, as well as friendly interchanges with the top bosses of Goldman Sachs investment bankers. She and Bill Clinton raked in $120 million since 2001 by giving these talks.

Goldman Sachs financiers were identified with the bubble that burst to initiate the Great Recession that cost 6 million families their homes and 9 million workers their jobs. Trump is rewarding Goldman Sachs by appointing four of its current and former bankers to top positions in his administration. Meanwhile, Trump arrogantly scoffs at the idea of divesting his holdings.

Backing stepped-up police terror, more anti-immigrant raids and deportations, vast increases in warships and weapons, and anti-Islam registries: These are on Trump’s agenda.

Ranting and raving against the Russian government will not stop Trump. Only a united struggle by masses of people in the streets can push back his reactionary program. The Jan. 20 Counter-Inaugural is the first step.