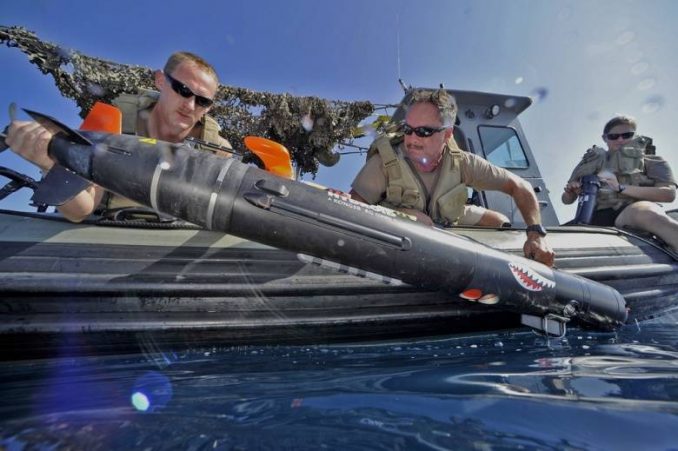 Does the People’s Republic of China have the right to defend its sovereignty in the waters surrounding China?

What are U.S. aircraft carriers, destroyers, nuclear submarines, bombers and underwater drones doing in the South China Sea? China has no such force in the Gulf of Mexico; yet China is depicted here as the aggressor.

For more than 100 years, the imperialists invoked the “freedom of navigation” to dominate Chinese trade. U.S. and British gunboats controlled China’s Yangtze, Yellow and Pearl rivers and coastal waters, where they patrolled up to 1,300 miles inland. Finally, in 1949 with the successful Chinese Revolution, the People’s Liberation Army kicked out all foreign forces and their hated battleships from its rivers.

“Freedom of navigation” is a despised term in China, reeking of past colonial domination.

Almost daily we hear that China is “militarizing” the South China Sea by building air bases on seven small islands.

President-elect Donald Trump has tweeted that “China is building a massive fortress in the middle of the South China Sea.” These expanded mini-islands are described in the U.S. media as a great threat to world peace and regional stability.

China’s Defense Ministry announced on Dec. 16 that it would arm the islands with defensive anti-ship missiles: “They are primarily for defense and self-protection and this is proper and legitimate. For instance, if someone was at the door of your home, cocky and swaggering, how could it be that you wouldn’t prepare a slingshot?”

Washington has demanded that China stop this island construction. It carried out several highly threatening “freedom of navigation operations” close to these mini-islands last May.

Then, on Dec. 17, China snatched an underwater drone operated from the USNS Bowditch, which was carrying out reconnaissance to detect Chinese submarine routes and construction on the seven islands. After objecting to U.S. intrusion in its waters, China returned the drone.

A new documentary by filmmaker John Pilger, “The Coming War on China,” describes the U.S. military presence in Asia in the film’s opening moments: “Today, more than 400 American military bases encircle China with missiles, bombers, warships and, above all, nuclear weapons. From Australia north through the Pacific to Japan, Korea and across Eurasia to Afghanistan and India, the bases form, as one U.S. strategist puts it, ‘the perfect noose.’

“The greatest build-up of NATO military forces since the Second World War is under way on the western borders of Russia. On the other side of the world, the rise of China as the world’s second economic power is viewed in Washington as another ‘threat’ to American dominance.”

President Obama announced this provocative U.S. military offensive, called the “pivot to Asia,” in 2011. It includes a plan to move two-thirds of the U.S. Navy to Asia and the Pacific. The weapons are aimed at China.

Conveniently, the latest confrontations in the South China Sea come at a time when the U.S. Navy needs to justify its biggest expansion in 35 years.

It presently has 273 battle force ships. Obama’s Asia Pivot would increase it to 308. Trump pledged to increase it to 350. The U.S. Navy immediately put forward a plan for 355 ships.

This costly new fleet to threaten the world will rob from every U.S. social program not already gutted by past military expenditures.

China has claimed the majority of the South China Sea for centuries. Now the People’s Republic of China, with 1.3 billion people, is determined not to relinquish its sovereign right to protect and defend this Chinese territory.

Its claim is based on a 1947 map made by the prerevolutionary Kuomintang government and recognized by the U.S. at the time, defining what is called the “nine-dash line.” It encompasses about 90 percent of the South China Sea, including areas claimed by Malaysia, the Philippines, Taiwan and Vietnam.

U.S. imperialism has attempted to strike deals and exert enormous pressure on these countries to force alliances against China by claiming to be a protector of small nations and their rights.

The decision of President Duterte of the Philippines to open relations with China during a state visit in late October and step back from being a U.S. pawn has sent shockwaves through Pentagon planners.

The area holds the richest fisheries in the world and possibly rich deposits of oil and natural gas.

The location of the South China Sea, which links the Indian and Pacific oceans, makes it strategically important. About half the world’s merchant ships pass through it. Keeping the South China Sea open for commercial navigation is a top priority for China.

Eighty percent of China’s oil imports pass through the narrow Malacca Straits, where ship traffic is three times greater than through the Suez Canal and five times more than through the Panama Canal. A blockade by the U.S. Navy could strangle China’s economy and devastate all the countries in the region.

The region surrounding the South China Sea accounts for over 60 percent of U.S. exports. It was the focus of the recently failed U.S. effort to create a Trans-Pacific Partnership — a regional trade alliance of 11 Pacific-rim countries that would have excluded China.

The setbacks for U.S. imperialism’s arrogant plans for the TPP, as well as a realignment of the Philippines, may bring more reckless threats.

China is determined to keep the South China Sea open to all commercial ships. But not to uninvited military ships.