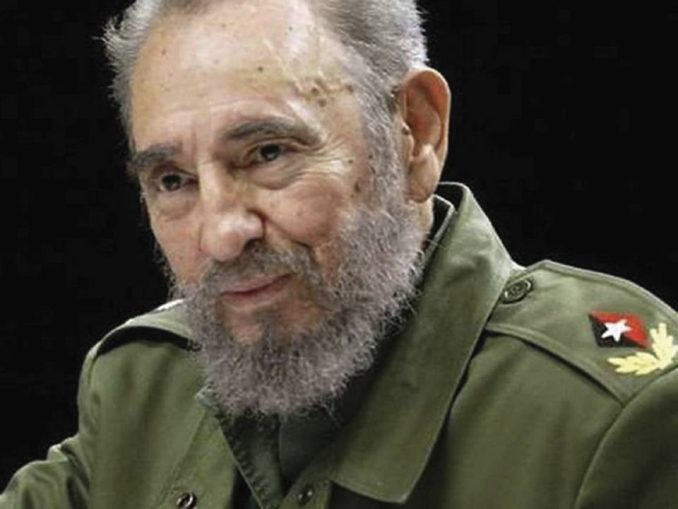 Excerpted from a talk given at the Dec. 1 Workers World Party meeting in New York City.

There are as many positive adjectives to describe Fidel as there are patterns of snowflakes: Revolutionary. Marxist/Leninist. Internationalist. Communist.  Environmentalist. Father. Husband. Leader. Statesperson. Strategist.  Anti-imperialist. Scientist. Unifier. Comandante.

To all those adjectives you could add “brilliant” and it would be no exaggeration whatsoever.

But one word stands out as we witnessed the Cuban masses in the millions come out to say their final farewell to Fidel: Beloved. Fidel was beloved by the Cuban people. And not just by the Cubans, but by all of us around the world who yearn and struggle for our liberation.

But let me clarify: Fidel was not loved because “Love trumps hate.”

Fidel was loved because, above all, his priorities and sacrifices were for the good of humanity, never for himself.

Born August 13, 1926, in Birán in the southeast part of Cuba, Fidel came of age during the brutal rule of Fulgencio Batista. Becoming president of Cuba in 1940, Batista governed until 1944 and returned to power in 1952 through a coup. He ruled Cuba with an iron fist in one of the most bloody and repressive dictatorships in Latin America.

Batista, of course, had the complete support of the U.S. government. As with the rest of Latin America and the Caribbean, the U.S. considered Cuba a place to rob by extracting its resources for the profits of the multinational corporations.

But on January 1, 1959, all that came to an end, when Fidel and the Revolutionary Army entered Havana, in victory.

Several important meanings are emerging from the death of our beloved comrade. One of those is unity.

First and foremost, the Cuban people are declaring that they will remain united to continue Fidel’s obra (his work). And President Nicolás Maduro of Venezuela and President Evo Morales of Bolivia affirm that they will continue to unite Latin America to defend Cuba’s sovereignty.

This does not come as a surprise as, indeed, one of the important pillars of Fidel’s work was unity.

To achieve victory against the brutal Batista dictatorship, the task for Fidel was to unite as many social forces as possible. Before the triumph of the Revolution, the Latin American movement had argued that the U.S. would never tolerate a socialist revolution in the region, and that it was impossible to defeat Batista’s regular army, even with guerrilla tactics.

Fidel proved them wrong. But to Fidel, there was more than guns. He built a political coalition instead of solely focusing on the armed struggle. No one fought for unity like Fidel. He sometimes had to retreat.  But he never ceded on his fundamental principles.

This is how Fidel was able to begin a political process that transformed the island of Cuba from one terrorized by torture and killings, dispossession, extreme poverty and exploitation, to one where the workers rule, where wealth is redistributed not to the banks or corporations, but back to the people.

And this is why the Cuban people love Fidel.

Fidel is loved for Cuba’s agrarian reform, for establishing one of the world’s most ambitious literacy campaigns and educational systems, for developing a free world-class health care system that even bourgeois organizations commend.

Fidel is loved because the peasants, who had been starved and beaten, the African Cubans, who had been the brutal victims of colonial and imperialist racism, for the first time in history came to the forefront as actors in history.

The people were with Fidel’s revolution, and, for the first time in Cuba, the workers were the agents of change, not the bourgeoisie. In fact, the revolution got rid of the bourgeoisie altogether!

Fidel is loved not only for his dedication to unity, but also for his exemplary leadership that brought Cuba through many perilous times.

His leadership guided Cuba through the special period of the 1990s, after the defeat of the Soviet Union, a mainstay of Cuba’s trade and international support. The resulting shortages made life extremely hard for the Cuban people, who were hungry, tired, exhausted. Any other developing nation would have seen rebellions, chaos and uprisings, would have seen repression. But not Cuba. Because of Fidel and revolutionary socialist leadership, because the Revolution has the support of the masses, because the Revolution and the people are one, Cuba survived this dire period.

Fidel’s leadership was central to Cuba’s struggle for the return of the child Elián González. In 1999, Elián’s mother misguidedly took her child with her on the seas in an attempt to get to Florida. She sadly died in that voyage. But Elián survived and was kidnapped by hostile counterrevolutionary forces and taken to Miami. All of Cuba mobilized to make the U.S. return Elián home to his father — and to the Revolution. And Cuba won!

The Cuban people and their leadership focused on freeing the Cuban Five, anti-terrorists who sacrificed much to monitor hostile military actions conducted in Florida against Cuba. The U.S. imprisoned the Five in 2001 for a decade and a half. But free them the Revolution did. And home they went.

Under Fidel’s leadership, Cuba’s role in support for Haiti, in liberation struggles in Africa, more recently in fighting Ebola, are only a few stellar examples of Cuba’s internationalism. As Cuba’s president, Fidel’s call for cancellation of capitalist debts owed by oppressed nations, and his constant attention to climate change, are more examples of his exemplary leadership.

We must study Fidel so that we can live like Fidel. These words from his May Day 2000 speech, words Fidel lived every moment of his life, tell us why:

“Revolution means to have a sense of history; it is changing everything that must be changed; it is full equality and freedom; it is being treated and treating others like human beings; it is achieving emancipation by ourselves and through our own efforts; it is challenging powerful dominant forces from within and without the social and national milieu; it is defending the values in which we believe at the cost of any sacrifice; it is modesty, selflessness, altruism, solidarity and heroism; it is fighting with courage, intelligence and realism; it is never lying or violating ethical principles; it is a profound conviction that there is no power in the world that can crush the power of truth and ideas.  Revolution means unity; it is independence, it is fighting for our dreams of justice for Cuba and for the world, which is the foundation of our patriotism, our socialism and our internationalism.”

WE ARE ALL FIDEL!  SOCIALISM OR DEATH!