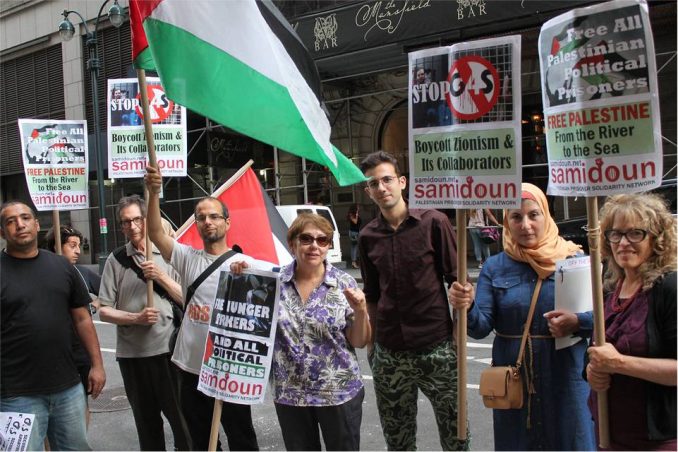 The Palestinian prisoners’ and Boycott, Divestment and Sanctions (BDS) movements celebrated a landmark victory on Dec. 2 as British-Danish conglomerate G4S, the world’s biggest security company and second-largest private employer, announced the sale of its Israeli unit.

“This experience with G4S proves that international campaigns, working with the Palestinian prisoners’ movement, can exert real pressure on even the largest multinational corporations,” Khaled Barakat, international coordinator of the Campaign to Free Ahmad Sa’adat, told Workers World.

The BDS National Committee and a coalition of other Palestinian organizations launched a campaign of economic pressure against G4S on April 17, 2012 — Palestinian Prisoners’ Day — demanding that the company end its services to Israel’s prisons and detention centers, as well as its checkpoints, settlements, military and security forces, and other occupation infrastructure.

The effort gained fresh urgency in August 2015, when the Palestinian prisoners’ movement issued its own call for supporters to prioritize the struggle against G4S.

In New York, Samidoun: Palestinian Prisoner Solidarity Network activists launched a series of weekly protests outside a local G4S office that have continued nearly every Friday for over a year.

Elsewhere, the Bill & Melinda Gates Foundation and the United Methodist Church divested their shares in the company. G4S also lost a security contract with Durham County, N.C., and faced mounting defeats across Africa, Europe, Latin America and the Middle East.

At the same time, Black-led student campaigns focusing on the company’s private prisons forced divestment by Columbia University and the University of California and the termination of a security contract at Cornell University’s Johnson Museum of Art.

In March, G4S announced plans to sell its main Israeli subsidiary, G4S Israel, and end its operation of private youth prisons in Britain and the United States, all of which the Financial Times called “reputationally damaging work.”

Even after pending regulatory approval of the sale, G4S will remain implicated in Israel’s crimes against Palestinians through its direct co-ownership of the Policity, a training center for Israeli security forces in occupied East Jerusalem.

G4S also faces continued pressure over its transportation and deportation of detainees for U.S. Immigration and Customs Enforcement, the operation of private police forces, like transit cops in Charlotte, N.C., and deployment of personnel to secure the planned route of the Dakota Access Pipeline against water protectors.

But G4S’ forced withdrawal from nearly all of its Israeli contracts is, nevertheless, a significant blow against the company, as well as a landmark in attempts to internationalize support for the Palestinian prisoners’ movement and isolate Israel.

Samidoun’s efforts against G4S and other companies profiting from Israel’s detention and torture of Palestinian political prisoners will continue, starting with its next protest at 4 p.m. Friday, Dec. 9, outside G4S’ New York office at 19 West 44th Street.

For more information and announcements, visit Samidoun’s website at samidoun.net and subscribe to its newsletter at eepurl.com/XFJr9.