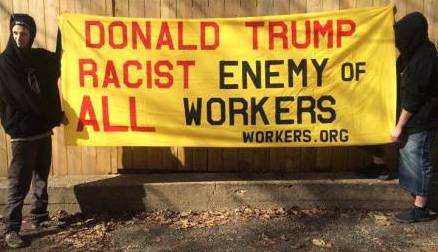 Those protesting Trump’s spring Midwest campaign continued with movement-building at a Dec. 3 gathering.

More than 20 people gathered Dec. 3 in a local library to continue building a progressive movement in the wake of the Trump electoral victory. Hosted by Workers World Party youth members based in Rockford, participants were multinational, multi-gendered and largely youth.

Some participants traveled from Chicago and various cities in southern Wisconsin to deepen their political understanding and show support. Local community organizers, those with many years of experience and those new to organizing, shared ideas. They discussed the history of racism in the U.S., what fascism is and the diversity of tactics used in past civil rights and liberation struggles.

Many at the meeting said it was very encouraging for them to see such a large turnout interested in working together. The #J20Resist counterinaugural protests in Washington, D.C., and across the country were announced, and participants raised organizing an event in Rockford. A Rockford delegation will attend the Midwest Socialist Conference hosted by Workers World Party in Detroit on March 25-26.