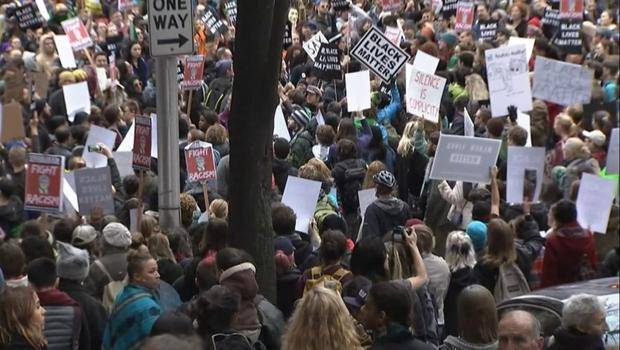 At least 3,000 demonstrators marched in Seattle this year on the second anniversary of the 2014 Black Friday protests against the infamous grand jury decision not to indict the cops for the murder of Michael Brown in Ferguson, Mo.

Black Lives Matter activists led the multinational marchers through downtown for four hours, blocking off streets. This limited the business of the rich retailers, and an army of cops didn’t help them.

Demonstrators chanted, “Black lives matter, not Black Friday!” and “Refugees are welcome here!” They also chanted, “Mni Wiconi, Water is Life,” in solidarity with the great Native-American convergence with the Oceti Sakowin at Standing Rock, N.D.

There were also many signs and T-shirts which read, “Block the Bunker,” opposing the city’s plan to build a massive police precinct costing $160 million.