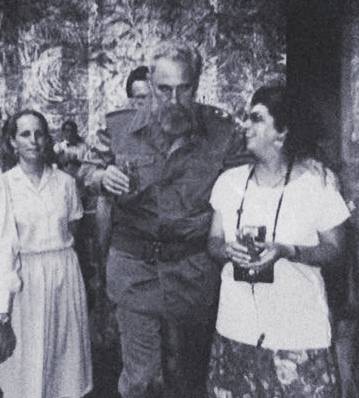 Much has been said and written about Comandante Fidel’s contributions to liberation struggles in Latin America, the Caribbean and all over the world. His personal contributions and his attributes are rarely highlighted enough. It was Fidel’s revolutionary qualities that made his leadership take such a gigantic step forward on behalf of peoples’ liberation and revolutionary socialism, not only in Cuba but also internationally.

Fidel left such a tremendous legacy, so many lessons, teaching through personal example how to be a true and consistent revolutionary socialist!

It was a time of an optic neuropathy epidemic that affected thousands of Cubans and was exacerbated by the U.S. criminal blockade on Cuba, which imposed great difficulties in obtaining materials from abroad. The crisis, however, was resolved like so many difficulties in Cuba through the creative spirit of the Revolution inspired by Fidel — not to accept a defeat, but to transform it into victory.

That is how the setback after the July 26, 1953, attack on the Moncada — when many revolutionaries were killed by Batista’s forces and Fidel was imprisoned — later became a victorious revolution.

The delegation met Fidel late at night for three hours at the Palacio de la Revolución. His great ability to converse with people was impressive. He made us feel at ease and got us to talk about valuable and relevant issues, while deepening our own understanding and ability to reflect on them.

This wasn’t just a nice personal feature. It illustrated vividly his thoroughly dialectical approach to life, what we as Marxist revolutionaries must constantly be vigilant about and pursue, particularly when we live in a society marked by metaphysical thought — the premise that basically things don’t change and that there is no interrelation with other developments.

Casual conversation was not part of Fidel’s vocabulary. For him, every person he met was a source of new information, of new experiences. Talking with Fidel was like unraveling a mystery. He always had a question, wanted to learn more, learn about the reasons, the basis of an affirmation. I had never met anyone like him.

Through his conversation with Dennis Banks we learned about the struggle to preserve the language and history of the Native peoples in the U.S. With Alice Walker the topic was Africa’s lack of adequate development due to colonialism and her research for her book on girls’ genital mutilation. With me, knowing that I am Boricua, the conversation was about the annihilation of our Taíno Indigenous people by Spanish colonialism and the current status of Puerto Rico under U.S. domination.

Fidel is now more alive than ever. He has become the bond uniting people all over the world. It is no accident that the quality usually studied first about Fidel is the concept of unity.

Joubert-Ceci is editor of Mundo Obrero.