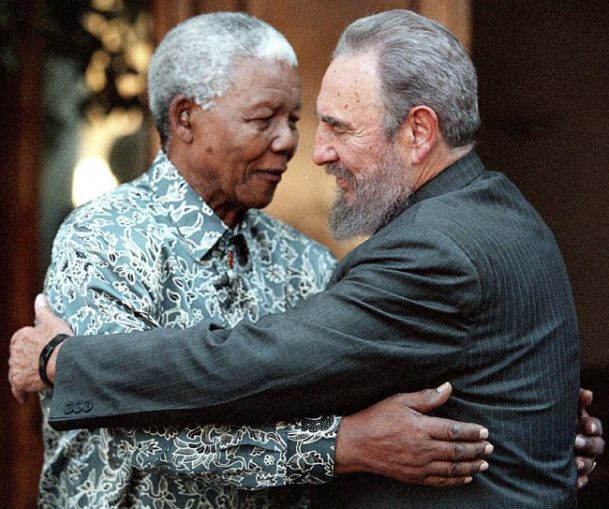 No other political figure outside of Africa symbolized global solidarity with the aspirations of the people, from the northern regions to the subcontinent, more than Comandante President Fidel Castro Ruz of the Republic of Cuba.

Historical, political and cultural ties between the people of Africa and Cuba extend back over five centuries. Cuba was colonized by European empires utilizing the labor of enslaved Africans, whose super-exploitation laid the basis for the rise of world capitalism and imperialism.

In a speech delivered in Havana by President Castro on April 19, 1976, commemorating the 15th anniversary of the heroic victory over exiled mercenaries coordinated by CIA operatives at Playa Giron (Bay of Pigs), the Cuban leader said, “We are a Latin African people — enemies of colonialism, neocolonialism, racism, apartheid, which Yankee imperialism aids and protects.”

Castro was responding to U.S. propaganda castigating the role of the socialist state, which had deployed 55,000 of its own troops beginning in October 1975 at the request of Dr. Agostino Neto, leader of the Popular Movement for the Liberation of Angola (MPLA), the Marxist-led independence front.

The MPLA had done most of the fighting against Portuguese colonialism since 1961. It was increasingly being surrounded by U.S.-backed reactionary forces of the Front for the National Liberation of Angola and the Union for the Total Independence of Angola.

Cuba’s 1975-76 intervention proved decisive in the rapid consolidation of the MPLA as the ruling party in the oil-rich state of Angola. Cuban internationalists would remain in Angola until 1989, after the defeat of the racist South African forces and the independence of neighboring Namibia (South West Africa), which had been under the occupation of the apartheid regime.

Numerous African political leaders have expressed condolences to the Cuban government and people.

The nation of Algeria in North Africa declared eight days of official mourning in honor of the revolutionary leader, who assisted in the defense of the country during the early years of national independence from France.

Algerian President Abdelaziz Bouteflika saluted the late Cuban revolutionary as “an authentic defender of the values of peace, respect and national sovereignty, and of his uncompromising struggle for the rights of people to self-determination. … This is also a great loss for the people of Algeria who have a special relationship with El Comandante, made of respect, admiration and mutual affection.” (Xinhua news agency, Nov. 27)

President José Eduardo dos Santos of the Republic of Angola called Castro “an extraordinary figure of transcendent historical importance.” Approximately a total of 350,000 Cuban internationalists served in Angola during the war against the U.S.-supported forces of counterrevolution, including the well-armed and brutal South African army.

Others weighing in on the passing of Fidel Castro included Republic of Namibia President Hage Geingob of the South West Africa People’s Organization, the national liberation movement turned ruling political party that has maintained power in the post-apartheid state since independence in March 1990. He said the struggle in Angola “was the watershed moment in southern African liberation.”

SWAPO’s military units fought alongside the Angolan defense forces, Um Khonto we Sizwe, the guerilla army of the African National Congress and the Cuban internationalists in battles for the total independence of Angola.

President Jacob Zuma, current leader of the ANC ruling party of South Africa, recounted, “Castro led the Cuban revolution and dedicated his entire life not only to the freedom of the Cuban people and the right of the Cuban state to sovereignty and self-determination, but also the freedom of other oppressed people around the world.”

South African Minister of Trade Rob Davies emphasized how “Castro was one of the giants of the revolution in the 20th century. He played a pivotal role in the liberation of Southern Africa, particularly in the battle of Cuito Cuanavale — the Stalingrad of apartheid. Castro showed incredible solidarity and ensured that our fighters prevailed, making the transition in South Africa unstoppable.”

Health Minister Aaron Motsoaledi stressed, “Through the Mandela-Castro initiative, Castro sent doctors to South Africa to work in rural hospitals. Cuban doctors are taught to work in primary health care, which is what the world needs, and in this way Castro was ahead of his time.” (iol.co.za, Nov. 26)

The Zimbabwe Sunday Mail quoted President Robert Mugabe as saying on numerous occasions that Fidel was a great friend of Zimbabwe and Africa. U.S. imperialism has imposed sanctions on both Cuba and Zimbabwe for many years. (Nov. 27)

The Sunday Mail also noted how both President Mugabe and Joshua Nkomo, leader of the Zimbabwe African People’s Union-Patriotic Front, were indebted to the support provided by Cuba in the African revolutionary process.

ZAPU-PF’s military wing, the Zimbabwe People’s Revolutionary Army (ZIPRA) enjoyed the support of the Cuban government during the guerilla campaign fought against the Rhodesian and South African armies.

Former ZIPRA cadre Grace Noko said, “When we went for training in Cuba, we were well-received and were treated well during the course of our training. … Castro was a warm man who hated racism and oppression. He hated people who despised blacks because of their color.”

Noko added that “our leaders, the likes of Dr. Joshua Nkomo, were inspired by Castro. He counseled them along the lines of the right to Independence, economic freedom and the need to fight inequality. The training was well-conducted, tough and of high standard. We were trained not only to fight in the war, but also to economically liberate ourselves afterwards.”

In 2014, Cuban medical personnel were deployed to Liberia and Sierra Leone after the rapid spread of the Ebola pandemic. The outbreak, the worst in history, hit three West African states: Liberia, Guinea-Conakry and Sierra Leone.

Even the U.S. corporate media and government were forced to acknowledge Cuba’s phenomenal contribution to the efforts to contain and eradicate the disease, which left over 11,000 people dead and thousands more gravely ill, including health care professionals in the three countries.

An article published by this author during the height of the Ebola pandemic on Nov. 4, 2014, was reprinted in August of this year by the Cuban leader’s website, fidelcastro.cu. It stressed that “Cuban health care workers have played a leading role on the African continent for decades. The revolutionary government views its work in the fight against the Ebola Virus Disease (EVD) as a manifestation of internationalism and solidarity with Africa.”