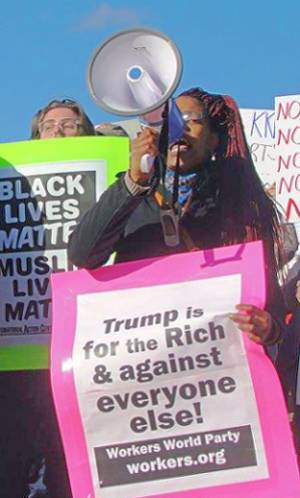 A wave of terrible hate has surged through the U.S. since Donald Trump’s election. This has been confirmed by the Southern Poverty Law Center through statistics that track and expose hate acts and crimes.

Three days after the election, every Black first-year student at the elite University of Pennsylvania received an email with racist language and explicit images of lynchings. Such threats have proliferated throughout the United States at work sites, schools and on the streets through verbal abuse, chants of “Build the wall,” dangling ropes or Black dolls hung in effigy, and other racist acts.

These threats foreshadowed horrific lynchings-by-gun. On Nov. 12, African-American musician William Sims was targeted and killed by white supremacists in El Sobrante, Calif. On Nov. 22, James Means, a 15-year-old African-American youth, was shot while sitting on a friend’s porch in Charleston, W.Va. His murderer was a 62-year-old white man who remorselessly justified his action with racist language.

The Ku Klux Klan announced a victory march in North Carolina on Dec. 3 to celebrate Trump’s win. A Michigan police officer drove his Confederate flag-flying pickup truck on Nov. 11 to a rally protesting Trump’s election. This “battle flag,” widely adopted by white supremacist and neo-Nazi hate groups, was proudly hoisted by Trump backers at a post-election “unity rally” in Delaware and elsewhere.

According to the SPLC, anti-immigrant hate incidents are now the most frequently reported, including assaults, bombings, threats and property destruction. The FBI documented a 67 percent increase in attacks on Muslims in 2015, with a sharp rise in attacks on trans people. Forty percent of all recent incidents occur in educational settings, from kindergarten through college.

This post-election hate has targeted all oppressed groups and has been virulently anti-immigrant, anti-Black, anti-LGBTQ, anti-Muslim, anti-Jewish and anti-woman. The vandalism and violence have been so dramatic that even corporate media like People and Time magazines have had to condemn them. But that condemnation only reflects the alarm of the ruling-class wing that lost the presidency to loose-cannon Trump.

The real and powerful resistance to these acts of terror is coming from working-class and oppressed people everywhere in the country. On election night, mass marches under the slogan “Not My President” erupted and continued for days, coast to coast. Individuals are posting real-time, how-to-resist examples on social media showing courageous one-on-one confrontations with hate-spewing strangers. One resistance video shows a self-defense instructor and a hijab-wearing Muslim woman demonstrating how she will stop an attacker attempting to rip off her scarf.

Defense of immigrant people is echoing 19th-century activist actions against the Fugitive Slave Act, which authorized federal marshals to seize free African-American people and force them back into slavery. Support for “sanctuary” cities and schools is growing nationally. The movement’s aim is to stop cops and federal immigration officials from arresting undocumented immigrants and deporting them.

The challenge is to continue to have people’s deep outrage flow in the most forward direction — to fighting the capitalist system itself. The way forward is not to flee back into the corporate arms of the Democratic Party. The way forward is not to embrace a Bernie Sanders approach that pits “identity politics” against “class politics.” That is an abysmal failure. It must be understood that oppressed people are working people who suffer disproportionately because of their oppression — whether from racism, migrant status and deportations, anti-LGBTQ and anti-woman hatred, Islamophobia or prejudice toward people with disabilities.

On Jan. 20 we have a chance for a huge People’s Referendum on Trump, which will challenge the climate of hate and capitalist greed against the common good.

When protesters gather on J20 in Washington, D.C., at counter-inaugural protests, they will say in a loud, united voice: “No! We resist!” They will announce their resolve to make the U.S. ungovernable under a president and an administration intent on destroying the present and future for workers and oppressed people.