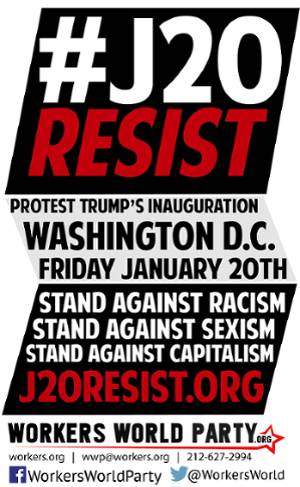 Participants highlighted the urgent need for unity in the face of the racist onslaught provoked by Trump’s election. Others pointed out that the U.S. has always been ruled by racists and sexists who needed to be fought.

A consensus was reached on organizing caravans to Washington, D.C., for the Jan. 20 counter-inauguration protests.

María Serna, a Colombian immigrant activist, spoke about the heightened importance of being in solidarity with undocumented workers, who have been targeted by Trump’s hateful rhetoric. Serna urged participation in the ongoing campaign to keep immigration officials out of nearby Norristown, Pa., by preserving that municipality’s status as a sanctuary city.

Erica Mines, representing the Philly Coalition for R.E.A.L. (Racial, Economic And Legal) Justice, raised the need for white workers to fight racism in their own communities where they have more access.

Ava Lipatti, representing University of Pennsylvania Students for a Democratic Society, reported on a recent anti-racist protest in response to a threatening text message sent anonymously to hundreds of Black students.