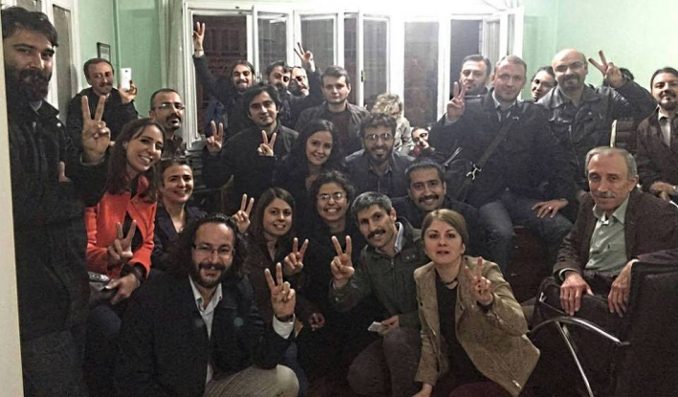 Members of the Progressive Lawyers Association in Istanbul barricaded in their office during police raid, Nov. 3.

The government of NATO-member Turkey, headed by President Recep Tayyip Erdogan, is a key U.S. ally in the war of regime change against Syria. Erdogan’s government has also carried out massive repression against Kurdish people and Turkish leftists opposed to the war. The following resolution, condemning Erdogan’s latest repression, was approved by acclamation at the Workers World Party National Conference on Nov. 13.

On Friday, Nov. 11, police raided the headquarters of the Progressive Lawyers Association (ÇHD) in Istanbul, Turkey, after the government of President Recep Tayyip Erdogan issued a new statutory decree approved by parliament requiring 370 associations and nongovernmental organizations in 40 cities to be shut down under the pretext of “relations with terrorist groups that are harmful to the national security.” Most of these are leftist and progressive organizations, including the Peace Association of Turkey, a member of the World Peace Council.

Members of the ÇHD were arrested and tortured, and then released on Saturday. Their files and computers were confiscated and their office was sealed by the police.

The raid came days after the Nov. 3 arrest of 12 Kurdish members of parliament from the leftist People’s Democratic Party (HPD), and less than a month after a violent raid on a left-wing cultural center and headquarters of the world-famous musicians Grup Yorum.

The National Conference of Workers World Party, meeting in New York City, Nov. 11-13, 2016, condemns the ongoing repression against progressive organizations and movements by the U.S.-backed government of Turkey, a NATO member. These attacks target left-wing organizations that support the Kurdish freedom struggle and that oppose Turkish intervention to aid U.S. regime-change plans in Syria.

From the belly of the imperialist beast, we send our solidarity to the determined Turkish and Kurdish resistance and pledge our solidarity at this difficult time.

Stop the raids! Hands off the Kurdish and Turkish left! U.S-Turkey out of Syria!