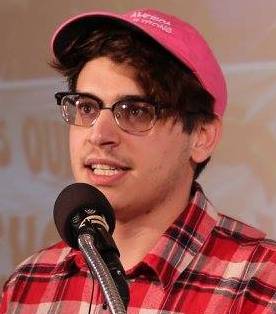 Workers World newspaper plays a central role in our political work and organization. For many of us, being handed a copy of WW at a demonstration or community meeting was our first introduction to the party.

We have a lot to be proud of in our paper. It’s been in print since 1959, and it’s been a continuous weekly paper since the early seventies. It is one of the last, if not the actual last printed socialist weekly in the U.S.

The paper’s archives are being digitized. Flip through the back issues catalog of WW and you will see the whole glorious history of people’s struggles around the world since 1959. I want to give a big, no, a huge round of applause to everyone who contributes to WW.

Some of you who are newer to communism might be thinking, what is it with socialists and newspapers? Major corporate papers are collapsing all over the country from lack of circulation and advertising as the physical newspaper is overshadowed by the internet.

Yet, you go to an anti-war demonstration and you can pick up seven different leftist periodicals. Part of it is because [Vladimir] Lenin, the leader of the Russian Revolution, raised the necessity of having a centralized, nationwide newspaper to coordinate and centralize the theory and practice of revolutionary socialists in that country. Another part is that for most of the past century, newspapers were the only way to talk to our class, the working class.

This is the fundamental purpose for our paper: to reach our class, to offer our socialist politics, to counteract the corporate imperialist media that bombard us from every angle 24/7.

But the paper is not the only way that we accomplish this. The only way you get a URL like workers.org is by joining the internet early in the game. We’ve been propagandizing on the internet since 1994.

Something that comrades might not know is just how much traffic workers.org gets, which is in the thousands.

My generation and those younger have grown up in an era of constant revolutionizing of technology, media and communication: the unfolding revolution of social media. We have also made great strides in this area, but we can certainly improve in terms of utilizing social media to its full potential.

And yet, while we push to reach as many as we can — which has really got to be taken up in a serious way by the party youth — we can’t risk underestimating the necessity of a physical, printed paper.

It’s how we reach the incarcerated members of our class who recently engaged in a historic strike, the migrant workers, the most poor and oppressed who may not have easy access to the internet.

It’s an organizing tool, since handing someone a paper can spark a face-to- face conversation that can build relations more deeply than a thousand “likes” [on Facebook]. On an internal level, the constant activity of filling a paper every week makes us disciplined. Our editorial staff has a deeply political call every Saturday morning to discuss the world situation.

Lamont Lilly talked about the paper in a way that really stuck with me. He likened the paper to an amazing, talented, intelligent, brilliant, romantic partner whom we have grown used to, with the honeymoon phase long past. But while the paper might not be as shiny, new and exciting to us, for someone who’s never seen it before, it can be quite alluring.

So much work, love, time and money go into the paper. If you’re looking for a way to get plugged in to Workers World Party, consider getting involved with the writing, editing and production of the paper. The paper is such a powerful organizing tool, please make the best use of it. Get it out to the community! Get it out to our class!