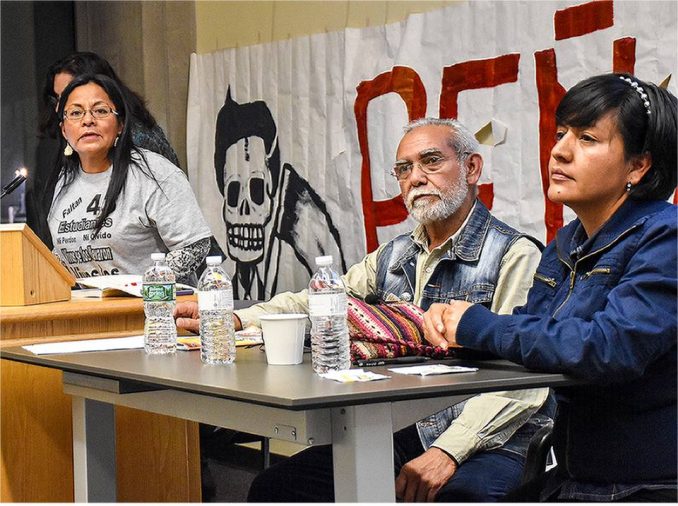 The struggle for the right of Indigenous peoples and their teachers to an educational system free from corporate control was the main topic of a Philadelphia meeting with two teacher activists from Oaxaca, Mexico, on Nov. 16.

As part of a three-city tour in the U.S. by Section 22 of the SNTE/CNTE union, Fernando Soberanes Bojórquez, a 40-year veteran of the Coalition of Indigenous Teachers and Promoters of Oaxaca, and Mayem Arellanes Cano, Zapotec lawyer in the Legal Affairs Department of the union in Oaxaca, presented a slideshow and commentary at Temple University.

El SNTE is el Sindicato Nacional de Trabajadores de la Educación (National Union of Education Workers), the largest union in Central America, with 1.5 million members in Mexico. It supports government reforms. With 83,000 members in Oaxaca, Section 22 of el SNTE is the most important political force in the state. In addition, the Oaxacan Indigenous movement is the most organized in Mexico, along with the Zapatistas in Chiapas.

La CNTE is the Coordinadora Nacional de Trabajadores de la Educación (National Coordinator of Education Workers), a dissident movement within el SNTE fighting since 1979 for both union democracy and social demands. One of the slides explained: “The struggle is not only in the streets, but continues in the classroom, where teachers fight against colonized education and for an education that fortifies Indigenous Peoples.”

Bojórquez and Cano highlighted how large the Indigenous population is in Mexico. Out of 2,428 municipalities, over 70 percent of the residents in 313 of them speak an Indigenous language. In Oaxaca, one of the poorest states in Mexico, 1.5 million people, out of a population of 4 million, speak an Indigenous language: Zapotec, Mixtec, Mazatec, Mixe or Chinantec, or one of 12 others. At least 418 municipalities in Mexico elect their authorities in communal assemblies.

The history of Indigenous struggles in Oaxaca has centered on defending their communal way of life against state attempts to destroy their communities. Education is an integral part of the struggle.

Bojórquez and Cano described how the Coalition of Indigenous Teachers and Promoters of Oaxaca (Plan Piloto-CMPO) employs innovative community-based education in the face of state standardized neoliberal education. Decades of experience have produced an educational structure which includes communal participation, use of traditional knowledge and Indigenous language, communal philosophy and creative teacher preparation, all based on a relevant curriculum. (See more detailed information at tinyurl.com/gwlh6yu.)

The Representative Council is the governing authority of the communal middle schools, made up of community leaders, interested community members, parents, teachers and students. This system of education helps to preserve, strengthen and enrich the original culture and promotes the human development of community members while enabling new generations to complete their education.

Proposed state reforms introduced in 2013 would destroy the communal education system. Under the new law, anyone with a college degree could pass the teachers’ test with or without teacher education preparation introduced by Plan Piloto-CMPO. New hires would receive only temporary contracts, without medical coverage, pensions, salary scale rights and other benefits. Massive firing of experienced teachers would be inevitable.

Effects on communities would include elimination of entire school levels (such as early Indigenous education), reduced teacher staffing levels, whole elimination of rural and Indigenous schools, and privatization of public education. Parents would even have to pay for water, electricity and other services at schools.

On June 19, a federal police eviction of a plantón or encampment in Nochixtlan, Oaxaca, turned violent, resulting in nine dead, “over 100 people wounded and between 22 and 25 disappeared after a confrontation that lasted 15 hours — during which police used tear gas and automatic machine guns to repress the fierce protesters. Hospital workers on the scene were also attacked with tear gas.” (commondreams.org, June 27)

State repression against La CNTE also includes freezing of bank accounts and arbitrary detentions. Teachers have been unjustly arrested and held in maximum security prisons far from their homes in Oaxaca.

At the end of their presentation, Cano and Bojórquez called for more solidarity between all those who are fighting corporate exploitation of their communities, as part of an international movement. Bojórquez said, “I believe that the strategies of struggle that we have used during the last 36 years are not sufficient to confront the education reforms and other structural reforms that are affecting our communities and their resources (land, water, forests, seeds, minerals). We must think creatively to devise new strategies that will unite teachers and civil society in the struggle for our lives that all of us are confronting.”

Cano ended the program by saying, “Today, with the huge social discontent we have heard during our stay in the U.S., you have a great historic opportunity to unite and organize. Your struggle is also our struggle, and it is not only to replace one tyrant for another, but rather to create a better world for all of us.”