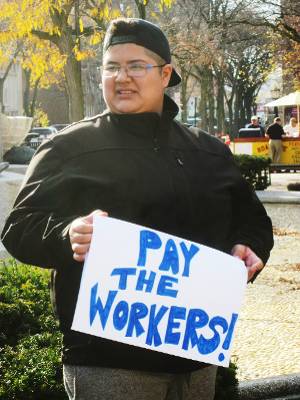 Every year U.S. bosses steal outright more than $50 billion in wages from workers. This is part of the wage theft committed by the capitalists in their rip-off of the value every worker creates — appropriating it as profit for the top 1%.

The Workers’ Center of Central New York held a demonstration against this capitalist thievery on Nov. 18 in Syracuse, N.Y., on the National Day of Action Against Wage Theft. About 30 people gathered in downtown Columbus Circle. There, one speaker pointed to the statue of colonizer Christopher Columbus and condemned his role in “one of the biggest thefts of all time” — the stealing of Indigenous lands.

WCCNY organizers described how outright wage theft ranges from refusing to pay workers, not paying them overtime, forcing workers to work off the clock, misclassifying them as “independent contractors,” stealing tips, paying below the minimum wage and holding back final paychecks.

Speakers included Andrea, a Latina who testified how she and her wife, Lourdes, worked for hours doing hard physical labor for a subcontractor at the national restaurant chain, Cheesecake Factory. Then he disappeared without paying them. But a militant confrontation by the WCCNY workers and their allies made the company cough up their checks overnight.

Rebecca Fuentes and Nikita Slade, WCCNY organizers, stressed that the organization is preparing for Trump’s assault on immigrant workers and called for solidarity. Howie Hawkins, a Teamster and former Green Party candidate for New York governor, exposed systematic wage theft at his United Postal Service workplace. He motivated the need for collective action, especially unionization. A local Walmart worker announced a “Black Friday” action linked to the Fight-for-$15 campaign. An occupational therapist spoke about the terrible consequences of wage theft on the health of workers and their families.

Protesters chanted, sang and staged political theater while passing cars honked in support and lunchtime workers reached for fliers. When a UPS truck pulled up at a stoplight, one person grabbed a flier and jumped to hand it to the driver — to stress the unity of the rally’s precarious workers with union struggles.

Fuentes ended with “Si se puede!” (“Yes! We can!”) and a call for stepped-up organizing of workers. She stressed the need for a New York statewide campaign to make driver licenses available to all people, regardless of their documentation.