Nov. 19 —The heroic, months-long, bold and brave resistance by the Oceti Sakowin, the Lakota, Dakota, Nakota Great Sioux Nation, against the construction of the Dakota Access Pipeline through sacred lands in North Dakota has won the hearts and minds of people across the United States and around the world.

The Standing Rock Sioux are leading the struggle to safeguard the Missouri River from pollution, which could harm upwards of 18 million people. Their slogan, “Water is life, No DAPL!” is being echoed across the country on campuses, in communities and on the streets during demonstrations of solidarity which have grown in number and size since the struggle of these stalwart resisters began.

Indigenous peoples from near and far have gone to Standing Rock, joined by Black Lives Matter activists, Palestinian students, a delegation from the Filipino organization BAYAN USA, environmentalists, labor unionists, many left and progressive forces, and even international delegations. Thousands of supporters have traveled to North Dakota to join the encampment and show solidarity with Native activists standing up to brutal corporate mercenaries, militarized state police and the National Guard.

They are resisting the DAPL and the vicious assaults by government and private “security” forces carried out on behalf of oil profiteer Energy Transfer Partners, a Fortune 500 corporation. In building the 1,200-mile, $3.8 billion pipeline intended to carry fracked crude oil, this capitalist monolith is driven only by its goal of reaping superprofits. In the process, ETP is flouting the federal treaty rights and sovereignty of the Standing Rock Sioux Nation and callously disregarding the vital need for a safe water supply, essential to human and all life.

“The militarized response to water protectors’ efforts to stop construction of the [DAPL] through sacred burial grounds and underneath a key water source” has drawn the attention of the U.N. High Commission for Human Rights. In a Nov. 15 statement, the body denounced the “excessive force” being used, which is “at odds with the right to assemble peacefully” and “should in itself stop the pipeline’s construction.” (indiancountrytodaymedianetwork, Nov. 17)

Indigenous leaders declared Nov. 15 a national day of solidarity with the Standing Rock Sioux Nation’s struggle against the DAPL. These protests demanded that the Obama administration and U.S. Army Corps of Engineers stop the dangerous, illegal and unnecessary pipeline. Over 200 actions took place in 50 states, including major rallies in San Francisco and Washington, D.C. Here is a sampling of these protests, including one that took place prior to the nationally coordinated day.

While many in the crowd were somber after the Trump election victory the previous night, they were strengthened by joining together to fight back and uplifted by the words of Mahtowin Munro, “We have been fighting this war since 1492. We are not going anywhere, and we are not afraid!”

Two members of the National Lawyers Guild who had just returned from providing legal services at Standing Rock told of the arrests of hundreds of people whose “crime” was to protect the water from the nightmare pipeline that ETP is trying to ram through before the end of the year.

Rev. Mariama White-Hammond spoke movingly of her recent trip to the encampment as part of a delegation of 500 clergy members. She noted that she witnessed police officers’ repressive targeting of Indigenous people.

All the speakers emphasized their commitment to defending the rights to Native sovereignty and water. The action was sponsored by the North American Indian Center of Boston, United American Indians of New England, Boston NoDAPL Solidarity and other organizations.

The rally then took to the streets in a powerful march dotted with dozens of beautiful signs and banners. When passing TD Bank, Citibank and other big banks, the marchers pointed out their complicity in funding the DAPL construction. Participants briefly shut down busy Storrow Drive and ended with a ceremony near the waters of the Charles River. 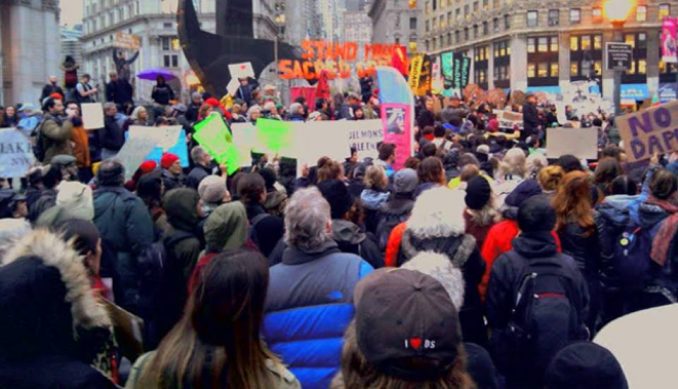 About 3,000 people gathered on Nov. 15 in Foley Square, near the local offices of the U.S. Army Corps of Engineers. The diverse crowd included Black, Latinx, Indigenous and many other nationalities, although most participants were white. They were also of all ages, including babies in strollers. Without a sound system, speeches were communicated through the “mic-check” technique of crowd repetition devised by the Occupy movement. The mostly handmade signs called for an end to the pipeline, respecting Indigenous sovereignty and sacred grounds. Some read, “Mni Wiconi” (Lakota for “Water is life”).

— Report and photo A. Majumder

Some 300 people came out on Nov. 15 to show support for the Standing Rock water protectors, who had called this international day of solidarity with their struggle. Detroit responded by taking to the streets and marching several blocks to the banks funding the DAPL, which is threatening the Oceti Sakowin’s sacred land and water sources. Marchers demanded that the banks withdraw their funds and revoke their support for the pipeline.

Hundreds in San Diego joined with people in cities across the country for a Nov. 15 massive Day of Action for Standing Rock. They demanded that the federal government and the U.S. Army Corps of Engineers reject the construction of the DAPL on the lands of the Oceti Sakowin in North Dakota.

The rally was held in a courtyard in front of the U.S. Army Corps of Engineers office. Hundreds came with signs and chanted, “We stand in solidarity with Standing Rock!” and “No DAPL!” The protest was organized by People’s Climate Change Action, also known as SanDiego350. Many speakers, reporting from Standing Rock, explained what the protesters are going through there and what their immediate needs are.

Ida Cruz, a member of National Nurses United, which represents over 85,000 registered nurses in California and nearly 200,000 nationwide, said, “We all stand in solidarity with Standing Rock [water protectors] who have for months been protesting construction of the Dakota Access Pipeline. We call on the federal government to permanently block this project.”

After detailing the many dangers involved in building the pipeline, Cruz said it poses a far greater threat than conventional oil. “This dirty crude oil would threaten the health and safety of approximately 17 million people who rely upon the Missouri River,” Cruz stressed.

People were encouraged to go to North Dakota to support the Oceti Sakowin at Standing Rock. It was emphasized that we must remember we have an obligation to stand up for everyone involved in this struggle.

Postcards addressed to President Barack Obama and the U.S. Army Corps of Engineers in North Dakota were passed around for people to fill out. The postcards read: “We demand that you honor Indigenous Nations’ sovereignty and treaties and ask that you revoke permits and enforce a complete and immediate halt to the Dakota Access Pipeline. #NODAPL!”

After the rally, protesters took to the streets with signs. They continued chanting, “We stand with Standing Rock!” and “No to DAPL!”