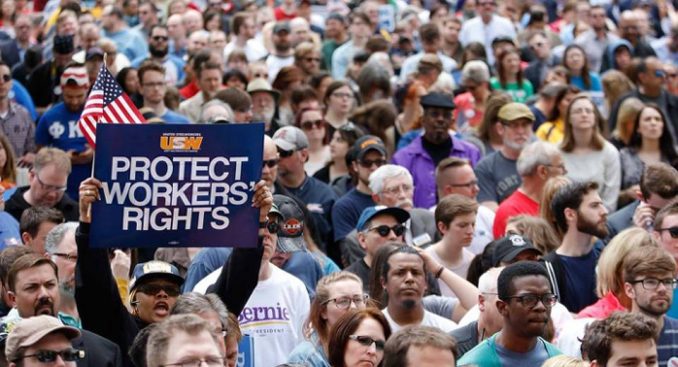 One of the labor movement’s most famous anthems is “Which Side Are You On?” Composer Florence Reece gave new lyrics to an old hymn in 1931 after gun-wielding gangsters working for mine owners invaded her home in Harlan County, Ky.

AFL-CIO President Richard Trumka served as United Mine Workers president from 1982 to 1995. He should know that song by heart. Unfortunately, he — along with United Steelworkers President Leo Gerard, United Auto Workers President Dennis Williams and leaders of the National American Building Trades Unions — don’t seem to understand what the question means.

Now Trumka has announced: “The AFL-CIO accepts the outcome of this election, and offers our congratulations to President-elect Trump.” (aflcio.org, Nov. 9) NABTU agreed, while Gerard and Williams showed themselves eager to meet with Trump about trade agreements like NAFTA.

This willingness to pal up to Trump is shameful! Trump opposed those trade agreements to win votes from workers. Meanwhile, he hurled racist, sexist and anti-immigrant epithets like bombs onto workers. Unions are the organized expression of workers’ power and unity. Union leaders should be the first to cry foul over Trump’s campaign of vile hatred that pitted one section of the working class against another.

The union leaders’ statements conflict with the explosion of hostility to Trump’s program from oppressed workers and youth. All over the U.S. tens of thousands have been marching night after night and roaring, “Not my president!” These masses saw through and rejected Trump’s racism, xenophobia, Islamophobia, misogyny, anti-LGBTQ bigotry and contempt for people with disabilities.

Trump has been openly anti-labor. His anti-union/anti-worker program and practices are no secret. He advocates a national “right-to-work” (for less) law and wants to abolish the federal minimum wage and the 1938 Fair Labor Standards Act. At Trump’s Las Vegas casino, management has been intimidating the low-wage, majority immigrant workforce and has refused to negotiate a contract with duly-elected and certified Culinary Workers Local 226.

Yes, it is standard practice after a presidential election for labor leaders to meet with the president-elect, whether Democrat or Republican. But in this election, the capitalist parties gave us two rotten candidates, Clinton and Trump, and told the working class: “Choose your poison.”

It’s time for union leaders to end their cooperation with capitalism. Their current approach is moribund class-collaborationism typical of AFL-CIO leadership since the AFL and CIO combined in 1955. This collaboration has grown worse each decade since.

Trump is not our president. Capitalism is not our system. The militant youth and others in the streets, who are part of the U.S. multinational working class, should have the muscle of organized labor behind them.

We need conscious, class-struggle unionism. To make gains for workers, instead of cozying up to capitalism, Trumka should call a general strike to block Trump’s inauguration!

Class consciousness is growing in the streets. As the old song says, “There are no neutrals.”