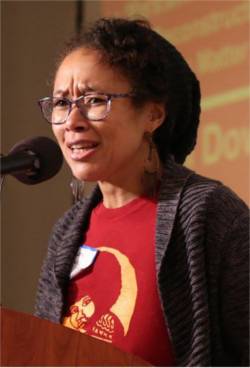 I am currently a Ph.D. student at the City University of New York Graduate Center. In a class this semester called “Racial Capitalism,” I was given the opportunity to read W.E.B. Du Bois’ masterpiece, “Black Reconstruction in America.”

My reading of that text couldn’t have come at a better time because it really provides a detailed exposition of the U.S. state’s role and its tactics aimed at preserving the capitalist economic system. It’s always been important to have such an understanding, but it’s so important now in the aftermath of the election of Donald Trump.

Every single social interaction I have had since Tuesday [Nov. 8] with faculty members, fellow graduate students, the undergraduates I mentor, and my partner has involved trying to sort out the anger, fear, pain and confusion regarding Trump’s election. It’s imperative that we mobilize, organize and remain vigilant. But it’s also imperative that we help provide an understanding of the current situation that will at least get people through their days — and at best encourage people to fight.

I want to talk about just one lesson we can glean from Du Bois. We can look at what happened in the current elections and, thanks to Du Bois, have a greater understanding of the two-party system and of our rightful role in relation to it. During the Civil War, it was the Democrats, and not the Republicans, who were the “conservatives” in U.S. politics. Yet President Abraham Lincoln, a Republican, and Vice President Andrew Johnson, a Democrat, ran for office and won the election on a unity ticket.

Today Lincoln is celebrated. He is unfortunately misunderstood here and internationally as the president who “freed the slaves.” But the truth of the matter is that Lincoln had no interest in Black lives at all, and was, in fact, at the beginning of the war, intent on making clear that the war was not one of liberation for the millions of enslaved people in the South. Lincoln even ordered Union troops to return escaped enslaved people back to their “owners” at the beginning of the war.

What changed Lincoln’s mind? In what Du Bois calls a “general strike,” droves upon droves of enslaved Black people began escaping from the plantations and arriving at Union encampments. The South, it was believed, had the advantage in the war because its white laborers were “freed up” to serve in the military. They were freed up because enslaved laborers would continue supplying food and supplies to the troops.

So it truly was a strike when these enslaved people withheld their labor from the white slave owners. Moreover, once the Union generals got over their racist outlooks and attitudes toward these enslaved people — or, at least, put them aside in the interest of the war — they discovered that the enslaved, who had spent years of their lives, if not all their lives, in the same areas where the war was being waged, made excellent spies and saboteurs.

Once the enslaved people came to the realization that they had turned the war into a war of liberation, they fought valiantly until the very end, even while facing Northern troops’ racism and discrimination. It wasn’t until enslaved people forced upon Lincoln the consciousness that this was, in fact, a war against slavery — and that the Union could not win it unless the Union emancipated them — that Lincoln changed his mind and delivered the Emancipation Proclamation.

I raise this because it has some incisive lessons for us today. Looking at Lincoln helps us understand the opportunism under which U.S. capitalist politics are waged. Like then, the politicians of the two-party system have one goal in mind: the preservation of the capitalist system. Lincoln’s motivation in preserving the Union was to support burgeoning Northern industrial capitalism, which needed a large geographical market and did not want to compete with seceded Southern states for international markets, particularly the market for cotton in England.

Similar to Lincoln, the “moderate” capitalist politicians of today — from Bernie Sanders to — and I’m not saying she’s this, but in relation to Trump — Hillary Clinton, will ignore the needs, desires and the very lives of Black people unless forced to recognize them. It should always be remembered that any support offered to Black communities and any pithy words uttered against police brutality — which were few and far between in this election — are done in the service of maintaining the capitalist system in the U.S. and worldwide.

Black struggle central to all struggles

Concurrently, any words said or actions taken by these politicians should be understood as a reflection of the movement — and not of “democracy” in “America.” But Du Bois’ analysis of the Civil War reminds us also that the Black struggle has always been central — and will always be central — to any struggle in the U.S.

There’s also a lesson about working-class unity. The mainstream media were quick to imply that it was white workers who voted for Trump — a vote which was, essentially, a referendum in support of racism, sexism and reaction. However, later statistics have shown that it was majority white voters with high incomes who voted for Trump. So we should categorically reject any analyses that say, “Oh, all the white workers are racist.”

Nonetheless, Du Bois notes that it was precisely the failure of Black-white unity that led to the overthrow of Reconstruction. According to Du Bois, class unity “failed to work, because the theory of race was supplemented by a carefully planned and slowly evolved method, which drove … a wedge between the black and white workers.”

Du Bois recognized that working-class unity could have resulted in a real dictatorship of labor in the U.S. He said that serious revolutionary potential was thwarted then by both the machinations of the Southern planters, seething from the destruction of their entire way of life, and the Northern industrialists, for whom a dictatorship of labor was precisely the last thing they wanted.

In New York, it can be extremely trying to deal with the insensitive ways some white people are dealing with this election. This week has left me weary and made me want to stay inside my apartment. I have needed this conference and to be here with you all.

However, if we want to win, if we want to overthrow this f—ked-up system and end all the everyday and spectacular violences it commits against our lives, we must continue to struggle for unity. And we must realize that any divisions are custom-made to preserve capitalism and imperialism.

I want to thank you all for being here, and for all the organizing and love that has taken place since the election. Let’s carry on, and let’s win.

Dowell will be facilitating an extended discussion on “Black Reconstruction in America” on Dec. 18 at the Solidarity Center in New York City.