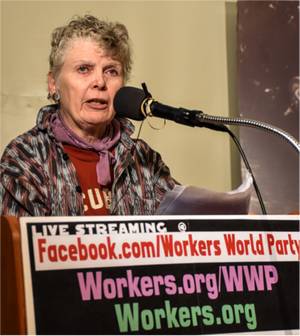 We woke up on Nov. 9 to learn that the ultrabigoted, racist and woman-hating Trump was president-elect and that Mike Pence was vice president-elect. Pence is rabidly hostile to lesbian, gay, bisexual, transgender and queer people and, as Indiana’s governor, led a massive attack by the state on LGBTQ lives disguised as “religious freedom.”

Pence has worked nonstop against same-sex marriage and has opposed all laws to protect LGBTQ adults and children in bathrooms, workplaces and public accommodations. He is deeply anti-woman and vows to overturn the Roe v. Wade Supreme Court ruling on the right to abortion.

This was a blow, as it came after the LGBTQ movement has won so many victories over the last several years, including the Supreme Court decision in 2003 overturning sodomy laws that criminalized gay and lesbian sexuality and its 2015 ruling that legalized same-sex marriage.

But those victories were won at the same time as reactionary campaigns have continued against LGBTQ lives. More than 115 anti-LGBTQ bills were introduced at state and local levels in 2015. These included bills to force lesbian, gay and transgender children into “conversion therapy” that claims it can change sexual orientation or gender identity. Scientific research has proven this cannot be done, as stated in “Just the Facts about Sexual Orientation and Youth” published by the American Psychological Association.

Nationally coordinated hate legislation to criminalize transgender people for using public bathrooms spread like a gasoline fire. One such bill is North Carolina’s HB2, “Hate Bill 2,” which created a national uproar after its March 2016 passage. HB2 was pushed by groups funded by North Carolina billionaire Art Pope, friend of the reactionary Koch brothers. Pope was listed in 2013 as one of the 10 wealthiest men in the U.S. He is ideologically dedicated to “free enterprise” — meaning no regulation of capitalism and no legal limits on the owning class’s “freedom” to exploit workers. (ourfuture.org)

It was no accident that the HB2 law criminalizing trans people also revoked all state laws protecting LGBTQ people, made it harder for all oppressed workers to file state discrimination claims against employers and stymied local governments from raising the minimum wage for some workers.

Queer and trans people of color were the first to militantly resist HB2 with marches, sit-ins and civil disobedience. Our Durham, N.C., comrades played leading roles in organized resistance that resulted in billions of dollars of lost revenue to businesses and established a basis for interlocking unity in resistance.

Fight every attack on oppressed people

WWP North Carolina organizers said on March 28: “The ruling class does not want to see a united front against homophobia, transphobia, sexism, racism, ableism or any other issue plaguing the working class. They want to divide us, using lies that make us enemies of each other. But as revolutionaries, we understand that fighting for the working class means fighting back against every attack on oppressed peoples.”

Bigots justified the anti-trans HB2 bill as necessary with the slur of “protecting women and children from sexual ­predators.”

Those of us who know the centuries of struggle against U.S. enslavement of and racism against Black people, particularly in the South, recognize the lying, unity-shattering accusation of “rapist” and “sexual predator” aimed at oppressed people, especially Black men.

We heard that calumny last year from white supremacist Dylann Storm Roof as he massacred nine African-American people, seven of them women, as they worshipped in a Charleston, S.C., church.

As for the accusation of “sexual predator” thrown at LGBTQ people, I have been accused of and grievously wounded by that slur. I lost custody of my own children when I came out as a lesbian in North Carolina in 1974. I and thousands of LGBTQ people have lost our children, jobs, birth families and often lives because of the bigoted belief that LGBTQ people prey on adults and children.

In those “old days,” we were illegal people. Our sexuality and our gender expression were criminal offenses. Yet human ties of love and family continue to be smashed in the U.S. through continued violence against queer people, the criminalization and deportation of migrant workers, cop killings and mass incarceration of Black people and other people of color, and the making of refugees through U.S. imperialist wars,

When workers and oppressed people rise up to fight these injustices, gender-baiting is a constant tactic used to divide the struggle. In 1973 the Equal Rights Amendment for women was defeated in North Carolina primarily because of a right-wing campaign of “bathroom panic,” which claimed the ERA would force women to use dangerous “unisex toilets.”

Dividing the working class by exploiting fears and biased assumptions about gender or sexuality goes beyond being only a domestic tactic of the U.S. ruling class. In 2001 the U.S. invaded Afghanistan using the false Islamophobic slogan of “oppressed women” to justify imperialist war. This was after the U.S. put the Taliban in power in 1979, overthrowing a revolutionary communist government that was making sweeping changes for Afghan women’s liberation.

The U.S. ruling class spreads false information about LGBTQ lives in countries they want to destabilize, like Iran, while promising so-called “Western freedoms” to LGBTQ people in exchange. Meanwhile, U.S. groups like the so-called Alliance Defending Freedom, funded by Art Pope, sow hatred and division about sexuality and gender in African countries, like Uganda, and promote laws that persecute and imprison LGBTQ people. (mediamatters.org)

The double-face of sex and gender manipulation is shown in a U.S. neoliberal like Hillary Clinton. She boasts of being for all women, yet also boasts of destabilizing the democratically elected government of Honduras, which resulted in the assassination of Berta Cáceres Flores, an environmental activist, Indigenous leader of the Lenca people and linchpin opponent of U.S. economic exploitation of her country.

Our comrade, Leslie Feinberg — who identified as an anti-racist white, working-class, secular Jewish, transgender, lesbian, female, revolutionary communist — wrote the first Marxist analysis of transgender oppression. In “Transgender Warriors: Making History” published in 1995, Leslie showed how oppression against women, lesbian, gay, bisexual, trans and gender nonconforming people was linked — and arose from what Frederick Engels called the “world historic defeat of women” with the division of humanity into classes.

The only way the capitalist class can stay in power is to keep workers and oppressed peoples from uniting. Our struggle for consciousness about how to unite is the most profound struggle of all. Onward to socialist revolution! Onward together in the struggle! Onward together!