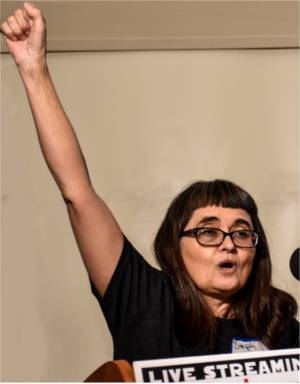 Everyone has heard of the magnificent struggle going on in North Dakota, which has united Indigenous nations worldwide as the Oceti Sakowin, the Lakota/Dakota/Nakota Great Sioux Nation, fights to protect the mighty Missouri and Mississippi rivers. They are fighting the Dakota Access Pipeline to defend their sovereignty, their lands, waters and the lives of future generations.

Standing Rock has captured the hearts and minds of many around the world, despite the lack of truthful media coverage.

Energy Transfer Partners is building DAPL to move millions of gallons of fracked crude oil from the Bakken shale oil fields in western North Dakota under the Missouri River to a pipeline in Illinois and then to refineries in the Gulf of Mexico for export. A Missouri spill would destroy clean water for Standing Rock and affect 18 million people downstream.

Pipelines corrode and rupture. Recently there were a Susquehanna River spill and an Alabama pipeline explosion. Big Oil never totally cleans up spills — from BP Horizon in the Gulf of Mexico to Exxon Valdez in Alaska — although they damage peoples’ health, habitats and wildlife. We now face the sixth extinction event in Earth’s history, due to global warming and ecological damage.

Bismarck, N.D., rejected DAPL to protect the city’s water, so the racist ETP moved the pipeline downstream to Standing Rock over Native opposition. In April women from Standing Rock established a camp in the path of the proposed pipeline. Youth organized to run cross-country to build awareness. More and more people began to flood in, and by August thousands had gathered to take a stand. Women and youth remain very much in leadership!

Indigenous peoples from throughout the hemisphere have gone to Standing Rock. The American Indian Movement, Idle No More, Indigenous Environmental Network and many environmental groups and activists have mobilized. Delegations include Black Lives Matter, Palestinian students from California, even people from Japan. Maoris in New Zealand are doing their sacred haka dances in solidarity. Mongolians, the Philippine organization BAYAN and the Popular Front for the Liberation of Palestine sent statements of solidarity. Unionists created a Labor Camp. Four international unions and many locals made solidarity statements.

Water protectors have marched and blocked bulldozers. Some locked themselves to construction equipment. Unarmed, they have faced weapons while trying to block the pipeline construction. They were tear gassed and Maced while swimming to protect grave sites on Turtle Island, where the police, National Guard and DAPL mercenaries have set up military headquarters.

Gov. Dalrymple responded with a military mobilization of sheriffs and cops from several states, the National Guard and DAPL’s hired mercenaries, including from G4S. Peaceful water protectors have been surrounded for weeks by soldiers and riot-gear-clad cops, cell tower blockers and nonstop surveillance flights overhead. Public highways are blockaded.

Water protectors have been beaten, bitten by attack dogs, tear gassed, pepper sprayed, shot with rubber bullets, injured by criminal use of LRAD sound cannons, arrested, brutalized while praying, strip searched, numbered and held in dog kennels. Women and elders have been strip-searched; one woman was left naked overnight in a jail cell. All their possessions — including spiritual items — were taken from them during arrests. They were later returned from a truck that dumped them all on the ground, soiled with urine. National Guard snipers threaten the defenders and even killed one person’s horse. DAPL has bulldozed sacred sites, rare historical and burial sites.

Corrupt state politicians, including Dalrymple, invested in this pipeline. Trump is an investor, too.

Despite confusion in the corporate media, the camps of the water defenders and their supporters are all on unceded treaty lands — not private, but stolen lands and waters. 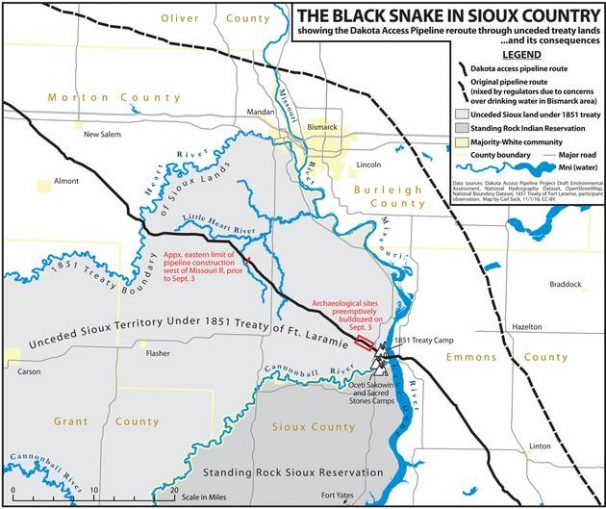 Map of unceded Native lands under the 1851 Treaty of Fort Laramie. The Dakota Access Pipeline cuts through these stolen Native lands.

Pipeline in violation of treaties

Under the 1851 Treaty of Ft. Laramie, the Oceti Sakowin lands, bounded by the Missouri River to the east, encompass half of South Dakota, large areas of North Dakota, Nebraska, Wyoming and Montana. Millions of acres were later stolen by settlers and the U.S., including the most fertile agricultural land which now lies flooded under Lake Oahe. This area provided farmland and orchards for both Standing Rock and the Cheyenne River reservations.

The U.S. Constitution declares that a treaty, an agreement between two nations, is to be the “supreme Law of the Land.” This makes the Indian treaties the constitutional “Law of the Land.” All these lands are Indian Country, Great Turtle Island.

In addition, the Supreme Court ruled in 1908 that lands set aside for a reservation imply American Indian water rights, known as federal reserved water rights.

Federal agencies such as the Army Corps of Engineers are mandated to have meaningful consultation with Native nations before signing off on land and water use permits. Consultation requires thorough environmental studies and exploration of Native sacred sites and graves.

Standing Rock was not consulted!

DAPL is now 90 percent complete and must be finished by Dec. 31. They don’t have the permit to drill under the Missouri River; yet they stated on Nov. 8 that they would go ahead and drill anyway. Their drillbox is in place, surrounded by a type of protective wall used on U.S. military installations.

The contract to build DAPL was based on $70 to $80 a barrel for crude oil, but the price has dropped and overproduction has thinned profit margins. If it’s not completed by Dec. 31, ETP has to renegotiate and might not be able to make $8 a barrel. Yet on Nov. 10 President Obama’s Department of Justice said that an announcement was coming soon for a DAPL “path forward” at Oahe.

Dalrymple’s military mobilization in coordination with DAPL’s mercenaries is an act of war. A governor has no right to declare war. He should be in jail.

I’d like to take a moment to thank everyone who has gone to Standing Rock and represented us, including our vice presidential candidate, Lamont Lilly. Fists up, everyone! Mni Wiconi! Mni Wiconi! Water Is Life!

Hedgecoke received the 2008 ­annual award for journalism given by the Wordcraft Circle of Native Writers and Storytellers.