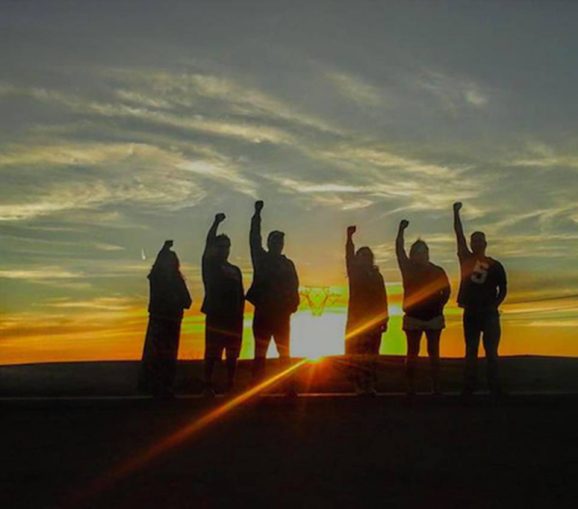 A mass movement of Indigenous people — from within U.S. borders and internationally — continues to build resistance at Standing  Rock, N.D. Their struggle to stop the $3.8 billion crude-oil Dakota Access Pipeline, financed by Energy Transfer Partners, has been underway since April.

The Oceti Sakowin (7 Council Fires of the Sioux) are leading a historic, militant struggle against the U.S. and state governments and their armed units as a colonizing force and capitalist institutions in league with Big Oil. In recent weeks, over 300 people have been arrested defending the sovereignty of the Oceti Sakowin people and protecting the region’s water supply.

The North Dakota National Guard, police from seven states and private security guards have attacked nonviolent water protectors in a continuation of the racist wars waged against Native peoples in the region since the 1800s.

In recent attacks, soldiers and cops have pushed into tipis with automatic weapons, marked those arrested with ID numbers on  their arms, and thrown them into subhuman jail conditions that were likened to dog cages. All those arrested have been routinely stripsearched, and one woman from Standing Rock was reportedly left naked in a cell overnight.

Faith Spotted Eagle, an elder of the Yankton Sioux, earlier highlighted specific dangers for Native women, saying of the “mancamps”  of Western oil drilling sites: “We have seen our women suffer. One out of three women in our nation has been sexually assaulted by non-native people.” (politico.com, April 22, 2014)

Erin Schrode, a CNN reporter, recorded a Nov. 2 attack by the state.  She wrote on her Facebook page that nonviolent water protectors “were seeking to cross the river to hold a prayer circle on Army Corps public land, but [were] halted by over one hundred hostile military police armed with and deploying tear gas, pepper spray, batons and rubber bullets, as well as assault weapons and the  threat of jail. … I was shot at pointblank range, dozens were maced and pepper-sprayed in the face, hundreds faced freezing waters.” That evening helicopters and airplanes harassed the resistance encampments with flyovers and flooding spotlights.

‘The world is watching’

Oceti Sakowin Camp Coordinator Phyllis Young condemned DAPL: “Since this company has arrived on our land, it has blatantly disregarded  the law and our people.” (nativenewsonline.net, Nov. 6)

Of the solidarity continuing to build, Sitting Bull College Visitor’s Center Coordinator Jen Martel emphasized in that article, “The world is watching and is saying it is time for us to stand up against corporate greed.”

Supporters are arriving nonstop at Standing Rock camps as the world’s peoples affirm Oceti Sakowin sovereignty and their defense of #WaterIsLife. Youth runners from Flagstaff, Ariz., representing the Hopi, Navajo and Pueblo peoples, entered Standing Rock and received a standing ovation after a 1,400-mile run in late October.

Representatives from Indigenous nations in South America have arrived with statements of support from their peoples.  Contingents from Canada to Japan and beyond have come.

Solidarity actions are spreading across the U.S., particularly at banks financing DAPL and at local U.S. Army Corps of Engineers’ offices. In San Francisco, 12 people were arrested Oct. 31 for blocking elevators at the local Citibank headquarters. The bank is a major lender to DAPL.

Another focus of solidarity actions will be on Nov. 15 at local Army Corps of Engineers’ locations to demand rejection of the DAPL permit and a full Environmental Impact Statement on the destructive project.

All those resisting at Standing Rock emphasize that inevitable pipeline failures will have dreadful consequences for millions of people beyond their own. On Oct. 31, the 5,500-mile Colonial Pipeline ruptured in Helena, Ala., exploding in a 150-foot geyser of fire, killing one worker and injuring eight more, some with critical burns. The double pipeline carries 100 million gallons of gasoline, jet and diesel fuel daily between the Gulf Coast and New York City. The 50-year-old pipeline is the largest refined products pipeline system in the U.S.

This was the second Colonial spill in six weeks and its sixth polluting accident in 2016. A September break spilled from 252,000 to 336,000 gallons of gasoline near the uniquely biodiverse Cahaba River. The Oct. 31 incident flooded the land with 168,000 gallons.

Tara Zhaabowekwe Houska, at the Standing Rock resistance, spread the word about the Colonial blast: “That explosion is case in point that pipelines are extremely dangerous and when they leak or explode, we’re not just talking about an isolated incident that can be fixed quickly, it can be hundreds of thousands of gallons of gasoline that can seep into the ground and into the drinking  water.” Houska, a citizen of Couchiching First Nation, is National Campaign Director at Honor the Earth, an environmental group supporting Native nations. (al.com, Nov. 2)

The connection between the pipelines was emphasized by Sarah Sunshine Manning (Shoshone-Paiute  and Chippewa-Cree), a reporter for Indian Country Today  Media Network, who was quoted in the same article: “For [the DAPL], slated to go under the Missouri River, there’s not the slightest  bit of confidence, that number one, it won’t break, but secondly, that the detection systems will be able to detect a burst in time.”

The Cahaba, Black Warrior, Coosa and Hurricane Creek Riverkeepers of Alabama called pipeline owners to task in a Nov. 2 statement:  “We have every reason to believe that this old pipeline may have other deficiencies such as deterioration, cracks, and leaks. It is time for spills, leaks, and accidents from the Colonial pipeline to end in Alabama. We cannot afford to continue playing Russian Roulette with lives and our drinking water.” They asked for regulators and the company to inspect the line and issue plans for maintenance and upgrade. (coosariver.org, Nov. 2)

But this plan places actions to protect people, water and earth in the hands of the colluding capitalist government and Big Oil. An independent report by pipeline experts recently concluded that the Army Corps of Engineers’ original environmental assessment of DAPL completely underestimated the risk of pipeline spills, inadequate construction, failure of regulatory oversight and the impact on both the Oceti Sakowin and everyone living downstream. (earthjustice.org, Nov. 3)

‘Listen to the water protectors’

That the drive for capitalist profit constantly endangers people’s safety and lives was reflected in how the Wall Street Journal covered the Alabama pipeline disaster. The newspaper did not mention any of its environmental consequences or acknowledge by name Anthony Lee Willingham, 48, a 20-year veteran pipeline worker who died in the fire. The pro-big-business newspaper pontificated  on how the explosion would impact gas prices and gave tips on “How to Game the Colonial Pipeline“ by predicting the stock market’s response.

The resistance at Standing Rock embodies the mass cross-alliance solidarity that can defeat the death-dealing forces of capitalism. Crucial to this battle are workers, like Willingham, who live  and work  in “right-to-work-for-less” states where legislation is stacked in favor of big business.

While AFL-CIO President Trumka has defended the pipeline as “good for jobs,” Liam Cain, a member of Laborers  Union Local 1271 in Cheyenne, Wyo.,  and a spokesperson for Labor for Standing Rock, has a message for the DAPL workers represented by LIUNA.

Cain, who has worked on many heavy construction sites and pipeline construction spreads, appeals directly to LIUNA workers:  “To the union laborers working on these projects, I would just implore you to listen to what regular folks are saying. Don’t just listen to the bosses, and not to just the echo-chambers on the spread. Listen to the water protectors, listen to folks talking about just transition, a view of the future. As the saying goes, ‘There’s no jobs on a dead planet.’” (indiancountrytodaymedianetwork.com, Oct. 30)