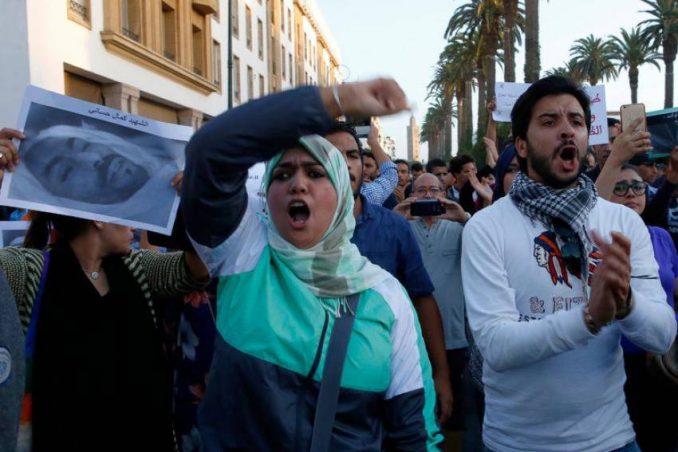 Demonstrators express anger on October 30 at the death of Mouhcine Fikri.

Fisher Mouhcine Fikri and some friends jumped into the back of a garbage truck to extract his swordfish, worth $11,000, which the fish and game authorities had seized and were going to destroy. His friends were able to jump out of the truck when the cops gave the order to “crush them.”

Fikri didn’t make it. His gruesome execution was caught on video by one of his friends and went viral throughout Morocco on Oct. 28.  While the biggest demonstrations were in Al Hoceima, Fikri’s hometown in the northeast, the Moroccan press reported massive protests in all of Morocco’s major cities and even in small and midsized ones, 40 cities in all.

Al Hoceima is in the Rif area of northern Morocco, a predominantly Berber area with a long history of militant struggle. The Berbers are indigenous to North Africa and make up about 40 percent of Morocco’s people.

The protests were massive but peaceful, and the cops didn’t make any attempt to stop them. To calm the fury, 11 police and fishery officials were detained, but the charge was “forgery” for filing faulty paperwork about the incident. It’s highly unlikely that anyone will be charged with killing Fikri, since the authorities are calling it an accident.

Protests continued past the immediate outrage, with a major march in Morocco’s capital, Rabat, on Nov. 6. It was not just the gruesome police murder that brought people out into the streets. Protester Khadija Zerwal told Reuters at the rally: “The death of Mouhcine is like a death for all Moroccans. This won’t stop until we get dignity and fairness.” Many protesters marched peacefully toward the Parliament, waving flags, chanting against the ruling elite and demanding dignity.

According to Forbes magazine, King Mohammed VI of Morocco is the richest man in North Africa. He has control over and profits from phosphates, Morocco’s most profitable export, as well as the fishing industry.

Morocco’s main trading and diplomatic partners are France and Spain, its former colonial masters, but the monarchy goes out of its way to maintain good relations with Washington.