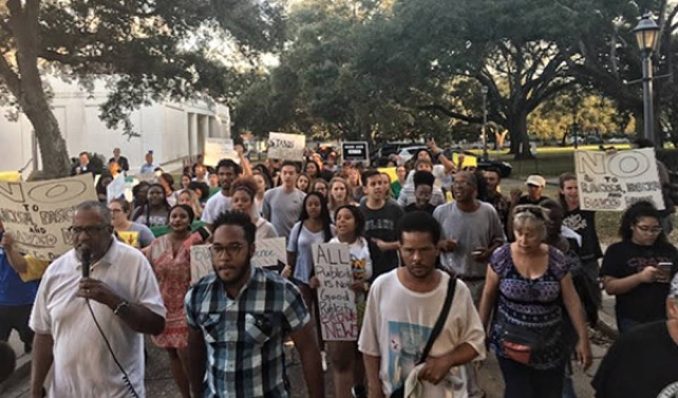 With the support of community members, activists and students from campuses throughout the city, the Dillard students showed the militant potential of the youth. Inspired by the Black Lives Matter movement, our youth are ready to fight courageously against further encroachment by the fascists.

When the students learned, on less than one week’s notice, that David Duke had been invited to their university, they were shocked and outraged. The infamous former “grand wizard” of the Ku Klux Klan, inspired by Donald Trump’s racist presidential campaign, had decided to run for the U.S. Senate in Louisiana. Polls that put him at 5.1 percent of the vote meant he was just over the 5 percent threshold required to participate in a U.S. senatorial debate held at Dillard on Nov. 2. The event was orchestrated by Raycom, a private broadcasting company.

A progressive student group at Dillard, Socially Engaged DU, sent a letter to the university president urging him to refuse to allow Duke on campus, citing fears for student safety and embarrassment, among other reasons. After their letter was ignored by the president, they vowed to protest the event. With help from students and activists across the city, they organized a large, energetic and determined crowd.

The protesters marched around the building, chanting “No Duke! No KKK! No fascist USA!” They eventually moved toward the back entrance of the building, where they were met by the campus police force. Protesters were able to pry open the doors, confronting the cops face to face. They wanted to get in to disrupt the fascist David Duke and chase him out of majority-Black New Orleans.

After holding their position at the entrance for about an hour, the protesters were sprayed with Mace, hit with batons, threatened with Tasers, kicked, slapped and shoved. They were fearless and sustained a long confrontation, but eventually the cops were able to lock the doors, prompting the protesters to move to the other side of the building to demonstrate against the repression.

When the debate ended, the protesters split up and attempted to block all the exits to prevent Duke from leaving without getting a piece of their minds. Cowardly Duke was able to sneak off campus with help from the campus police and administration. As protesters noticed his vehicle speeding off campus, they yelled and hit the car. After he escaped, the protest began to lose steam and disperse, and the cops used this opportunity to arrest six protesters, a stunt they would not have tried when the protest was at full strength.

All charges against the students were later dropped after widespread media coverage and an outpouring of support for the protesters.

To some students, the university administration and the campus police force have lost any legitimacy they previously may have held, and some students are working to hold them accountable for their actions on the night of the protest.

As for Duke, it has once again been proven that he is not welcome in New Orleans and should expect steadfast resistance whenever he shows his face here. Our youth have the courage, not only to fight fascists, but also to confront the state that protects fascists while murdering and imprisoning poor and oppressed people.