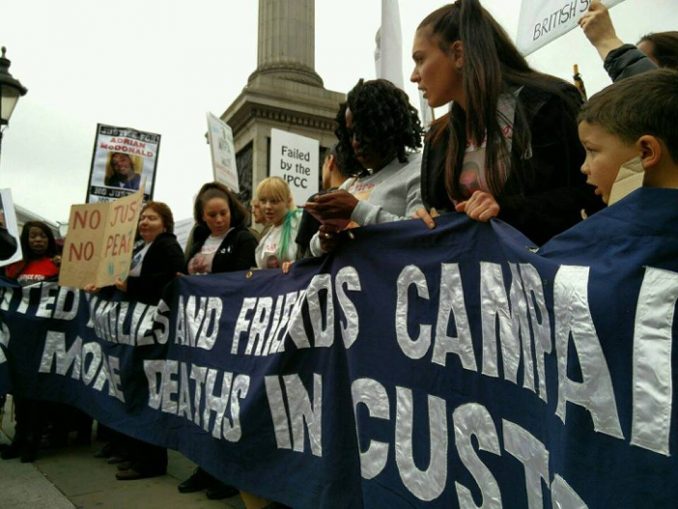 London – Hundreds of people from across Britain gathered here in Trafalgar Square to hold a rally against police brutality on Oct. 29. For the last 18 years, the United Families and Friends Campaign has held a march from Trafalgar Square to Downing Street. Those attending told Workers World that this year’s rally has been the largest so far.

Compared to the United States, the numbers in the U.K. seem low. More than 880 people have been killed by the police in the U.S. in 2016. Meanwhile, 34 have been killed in Britain, where police do not carry guns. Most people die here while in police custody after being beaten or having their medical needs neglected.

This discrepancy in numbers does not mean that victims here have been any more successful than those in the U.S. in achieving justice. Since 1990, 1,577 people in total have died in police custody. That has led to zero convictions of police.

The Independent Police Complaints Commission is supposed to investigate and prosecute these killings. The problem is that eight out of nine IPCC senior investigators are former cops.

Many of the people who die in police custody here have mental health problems and are particularly vulnerable.

Saqib Deshmukh, from Slough (a town 21 miles west of London), was at the rally on behalf of the Justice for Habib “Paps” Ullah Campaign to highlight the struggles that South Asian (Indian, Pakistani and Bengali) people have to wage in Britain. Paps died in 2008 after being stopped by police and experiencing what police called “trouble breathing.” He was survived by a wife and three small children.

Deshmukh said that the struggle against police brutality is a multinational struggle. “Until we get cops who are sacked, who are imprisoned … that will be the only deterrent to other police officers. Otherwise, they’ll continue to act with impunity, thinking they’ll actually get away with it.

“I’ve been in court,” Deshmukh continued, “and I’ve seen massive legal teams representing these officers. The officers walk in there smugly, knowing that nothing could stick on them. They’ve got the best legal minds in the world, in this country, that are representing them. That’s such, you know, that’s what gets families angry.” Families meanwhile struggle to receive legal aid to prosecute the killer cops responsible.

“Justice looks like police officers being imprisoned for what they’re doing, which is murder — but also not just murder. We’ve got police officers who’ve lied in court,” said Deshmukh. “In Paps’ case, they committed perjury. Anyone else would have been sent down [been imprisoned] for that. Officers have to go down for that.”

Kuchenga Shenge, a Black trans woman from North London and child of Pan-African activists, told Workers World that she sees herself as part of a larger international community without borders. “I think the Black population of America [the U.S.] should see themselves as part of a diaspora. We really do stand with them. We love Harlem. We love Oakland. We really listen. We really give a fuck about you guys! We just really want them to care about us as well.

“At the end of the day, in Paris, in Dakar, in Johannesburg — we’re having a conversation. Sometimes it feels a bit one-sided, but we’re open and we love you. We’re waiting for them to recognize us, their diasporic cousins.”

Shenge says she reads and watches a lot of material from the United States online, including material from the Sylvia Rivera Law Project, and hopes that the internet will open up more dialogue between borders.

Deshmukh stressed the importance of remembering those who have lost their lives at the hands of the police. “People have to know these names. Sometimes we look at what’s happening over in America [the U.S.] stateside, and we know those campaigns. We know their names. We may not know the names of Darrell Neville here, of Paps, and Sean Rigg, and all these other names. There’s new families who come here each year. We need to know all their names. The media need to know all their names. And the police and authorities need to be held accountable for their deaths.”

As the movement to remember the names of those killed by police grows, so too have their names echoed louder in the halls of power, while the working class and oppressed advance on centers of oppression worldwide.