“As members of the working class, it’s so important that we vote intelligently, with our own hearts and minds. This ‘lesser of two evils’ narrative is old and played out now. People know damn well that neither Donald Trump nor Hillary Clinton represent the interests of poor, Black, Brown or working people. Voting for socialist candidates isn’t just a ‘protest vote.’ It’s an expression that something better is very possible. It’s a refusal to go along with what the ruling class is trying to force feed us,” says Workers World Party’s Vice Presidential Candidate Lamont Lilly on  LeftVoice: “We Don’t Subscribe to Reforming the Police” (tinyurl.com/jhjptpl/).

On Tuesday, Nov. 8, we want you to join us in voting with your hearts and minds, voting for revolutionary socialism vs. white supremacy and all other forms of inequality under capitalism.

WWP candidates Monica Moorehead and Lamont Lilly have been tireless champions of those who are fighting on the frontlines for a better world. Our campaign (tinyurl.com/z8e66js) has stood with Standing Rock, Black Lives Matter, migrant workers, labor and nearly every issue concerning people of color, women, LGBTQ communities, people with disabilities, students and more, along with national liberation movements fighting the U.S. empire from Occupied Palestine to Haiti to Venezuela.

We have met thousands of people who are fed up with both capitalist candidates and who want nothing less than a revolutionary change.

Take a stand on Tuesday — independent of the two parties of racism, capitalism and war — by voting for Workers World Party.

How do I vote for Monica and Lamont?

Here’s how you can vote for Monica and Lamont: 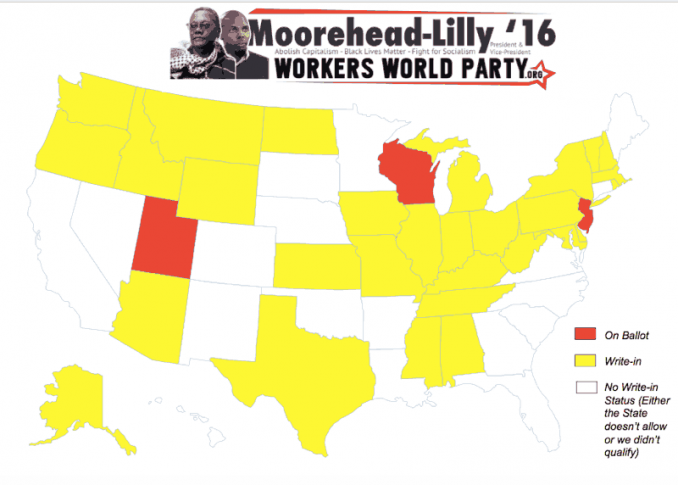 Ready to continue the struggle after the election? Join us in New York for the WWP National Conference on Nov. 11-13 in NYC!