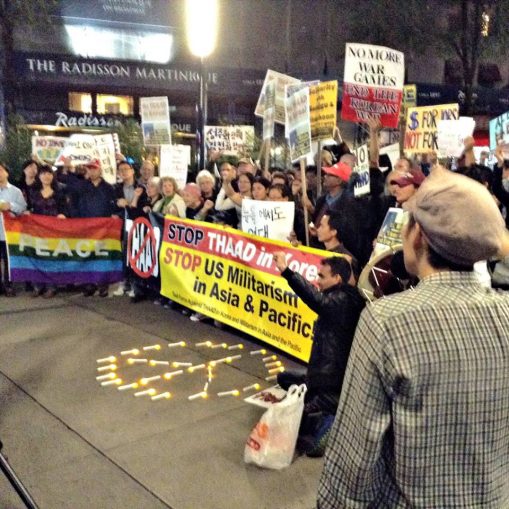 The event was part of worldwide rallies that took place in Washington, D.C., California and Korea. The New York protest was held in Manhattan’s Koreatown, near Herald Square.

Many Korean Americans spoke in opposition to this dangerous weapons system. So did representatives from the Filipino group BAYAN and Veterans for Peace. Both the Raging Grannies and a duo from the Catholic Worker movement performed.

Representing the International Action Center, Steve Millies told the crowd, “As a retired Amtrak worker I know this THAAD missile system is a nuclear train wreck. There’s nothing defensive about THAAD. Like the Star Wars program started by racist Reagan, THAAD is really a nuclear first-strike weapon.

“If the utterly mad generals and admirals in the Pentagon think that they are protected from retaliation by THAAD, they are much more likely to launch a nuclear first strike on the Democratic People’s Republic of Korea and the People’s Republic of China. That’s what Generals Curtis B. LeMay and Lyman Lemnitzer wanted to do a half century ago.

“What Koreans need to be protected against is from what Dr. Martin Luther King Jr. called ‘the greatest purveyor of violence’ — Wall Street’s war machine.

“Thirty thousand Korean slave laborers were burned alive by the U.S. atom bomb dropped on Hiroshima — an act of total barbarism. Forty years earlier President Teddy Roosevelt got a Nobel Peace Prize for handing Korea over to the Japanese Empire in a treaty signed in Portsmouth, N.H.

“It was future Secretary of State Dean Rusk — a war criminal who helped kill millions of Vietnamese and Laotian people — who drew up the map that divided Korea along the 38th parallel.

“Instead of installing THAAD, what the U.S. needs to do is to sign a peace treaty with the Democratic People’s Republic of Korea and get out of Asia. The Pacific Ocean is not a U.S. lake.