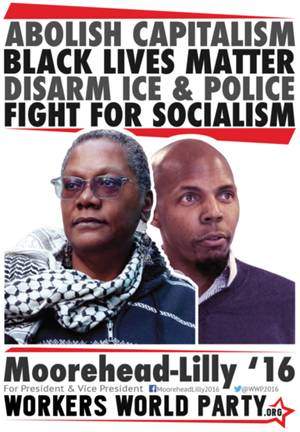 Oct. 24 — In a period of less than two weeks, the United States has expanded its military intervention into three major areas of conflict in Southwest Asia: Yemen, Iraq and Syria.

The Workers World Party 2016 Presidential Campaign opposes all three imperialist military interventions and demands that the U.S. withdraw all military forces from the region.

No matter how Washington explains its role and whatever pretext it gives for the intervention, the Pentagon’s role in the region and in each country is reactionary, harmful and dangerous. U.S. imperialism is incapable of making a “humanitarian” intervention.

The Pentagon intervenes to impose the economic and strategic dominance of the transnational corporations and the 0.01% of capitalists who rule the United States. It is no more capable of bringing peace to the world than it is of eliminating racism and police brutality at home.

Let us be precise about these three ­attacks:

The Navy destroyer USS Nitze fired Tomahawk cruise missiles on Oct. 13 against the Ansrullah movement in Yemen — also called the Houthis. Prior to this Washington supplied weapons and logistical support to the monarchy in Saudi Arabia that has been slaughtering civilians in Ansrullah-controlled areas of Yemen for more than a year.

The U.S.-coordinated coalition, including U.S. air attacks, U.S. Special Forces, the Turkish army, the pro-U.S. Kurdish peshmerga, the Iraqi army, police and sectarian militias, opened a full-fledged attack on Oct. 18 on Mosul in the country’s northeast. Mosul is Iraq’s second most populous city and has been under control of the Islamic State group (IS) for the past two years.

Since Sept. 16, when the Pentagon sabotaged a U.S. agreement with Russia by bombing Syrian government forces near Deir Ezzur, Washington has stepped up its anti-Syria and anti-Russia propaganda campaign. It has especially targeted the Syrian government and Russia for their offensive aimed at freeing Aleppo, Syria’s largest city. Parts of Aleppo are still held by the so-called rebel forces, which are mainly IS and other reactionary sectarian armies.

In Yemen, Iraq and Syria, Washington’s intervention over the past 25 years has destroyed the infrastructure, killed more than 2 million people in total and, according to the Pew Foundation, made internal or external refugees of 15 million people out of a total population of 85 million in the three countries. Whether fired by U.S. troops and pilots or by U.S.-NATO client forces in the region, like Saudi Arabia, U.S. weapons have wrought terror.

The biggest battle is now unfolding to take Mosul. The Pentagon admits to not only giving air support but having 100 Special Forces troops on the ground. A total of 5,000 U.S. troops are now — once more — inside Iraq. This means the Pentagon is directing a coalition force of 100,000 in the attempt to conquer Mosul.

Prior attacks on a smaller scale carried out by a similar “coalition” flattened the smaller Iraqi cities of Ramadi and Fallujah, leaving hardly a building intact. The battles not only drove out IS fighters, who fled to IS-controlled areas in Syria, but terrorized the population. Some analysts argue that one object of the attack on Mosul is to drive IS fighters to Syria to create problems for the Syria-Russia alliance.

The U.S.-led war against Syria raises the possibility of a direct confrontation between the U.S. and Russia, two states armed with thousands of nuclear weapons. Anti-imperialist activists in the United States, to their credit, have begun a process of mobilizing anti-war movements worldwide against U.S.-NATO intervention there. WWP presidential candidate Monica Moorehead, a signatory, urges all to support the petition circulated at handsoffsyriacoalition.net.

Not only in Syria, Iraq and Yemen, but wherever U.S. imperialism intervenes, whether in Afghanistan, Libya, Korea, Somalia, Pakistan and Ukraine or by subversion in Latin America, it brings misery to the people, squanders wealth better used at home and turns U.S. youth into cannon fodder for the capitalists.

The WWP 2016 Presidential Campaign demands the U.S. remove its bloody hands off the world’s people and end Pentagon interventions everywhere.