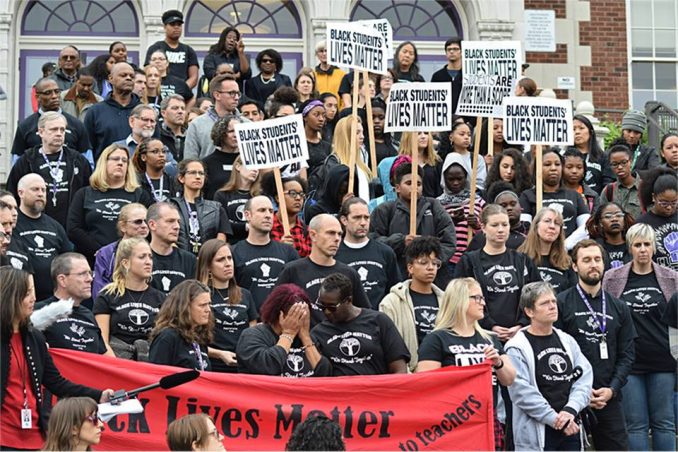 “The #BlackLivesMatterAtSchool event in Seattle yesterday was breathtaking. Never before in the country has an entire district of educators risen up to declare that Black lives matter. It’s hard to even put into words the power of this event,” said Jesse Hagopian, Black educator and co-advisor to the Black Student Union at Garfield High School in Seattle. (iamaneducator.com)

Rallies were held at schools throughout Seattle on Oct. 19, along with educational events. Lessons were taught on Black history and institutional racism throughout the day.

A racist provocation led to the Black Lives Matter day. For at least a year more than 100 Black men have welcomed students at different Seattle schools as the students enter. The men, organized as Black Men United to Change the Narrative, high-five the students to present a positive image of Black men and to encourage students in their studies.

The men had planned another demonstration in September at John Muir Elementary, a multinational school. The event was announced in the local media. But racist websites such as Breitbart also publicized it, and the school received a bomb threat for hosting this positive welcoming action.

The school district cancelled the event but dozens of Black community members, encouraged by Black Men United to Change the Narrative, showed up to welcome the students. Students and teachers were resolved to counter this racist threat.

A resolution by the Social Equality Educators, a progressive rank-and-file group, was presented to the Seattle Education Association’s Representative Assembly. The resolution called on SEA members to participate in an action by wearing Black Lives Matter T-shirts at school, together with Black Men United to Change the Narrative, on Oct. 19. The resolution passed unanimously.

Hagopian estimated that about 3,000 teachers and staff, out of 5,000 members, wore the BLM shirts. He said, “There was a joyous atmosphere around the city. … There is so much work to be done to make Black lives truly matter at school. But at the rally for Black lives at lunch time at my high school, Garfield, something happened that let everyone know that change is already happening.

“One of our teachers, Janett Du Bois, revealed to everyone in the middle of our rally that the police had murdered her son a few years ago. No one at the school knew about this. It was in that moment of seeing everyone wearing Black Lives Matter T-shirts that she found the strength to tell her story. Her bravery to go public has changed Garfield forever. I am so glad that she no longer has to suffer alone with the pain.”

Along with the SEA, Social Equality Educators and the NAACP strongly supported the action. Even the school district supported it.

Photographs of teachers and students in their BLM shirts at all schools were taken to send to and give encouragement to teachers around the country. More than 200 scholars and professors nationwide signed a statement of support for the Seattle educators. Some leading social justice activists also sent a statement of support, saying, “We’ve got your back.”

The Seattle teachers have fought hard to gain the platform to expose racism in their community.