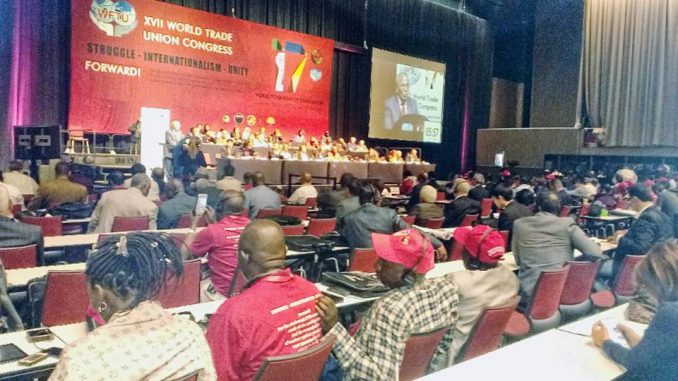 Durban, South Africa – For U.S. labor activists, who have to contend with a conservative labor bureaucracy that at times promotes “partnership” with employers, the World Federation of Trade Unions’s emphasis on militancy, internationalism and “class-oriented” unionism was a breath of fresh air.

The WFTU held its 17th Congress in Durban, South Africa, Oct. 5-8, drawing over 1,500 delegates and observers from 244 unions in 111 countries on five continents. The unions combined have 92 million members, an increase from 74 million at the 16th Congress held in 2011 in Athens. They were attracted by the theme of struggle “for the attainment of contemporary workers’ needs against poverty and wars generated by capitalist barbarity.”

Some 17,000 people from all over the world watched the congress on the ­internet.

While Europe was well represented and over 20 observers came from the U.S., the majority of voices were from workers of the “global South” — Africa, Asia, Latin America and the Middle East.

COSATU, Zuma’s African National Congress and the SACP together represent the Tripartite Alliance that was forged during the long struggle to defeat racist apartheid. The speakers were proud of the decision to hold the Congress — the first on the African continent — in Durban. Dlamini explained that the unions in South Africa “are still struggling to correct the imbalances of the present,” such as the “unforgivable” contrast between CEO salaries and workers’ wages. Zuma pointed out that “in 1962 WFTU was already in the trenches with us.”

Union leaders from almost every country in attendance took the floor. One after another expressed how honored they were to be gathering in the heroic land of South Africa. A recurring theme was the need for class-struggle unionism. From the U.S. delegation, Cherrene Horazuk cited the Harvard cafeteria strikers and striking Allina nurses as rare positive examples of class-struggle unionism in the U.S.

Speaker after speaker openly condemned capitalism, privatization and other neoliberal economic schemes, including attacks on pensions and on public workers. They also condemned imperialist wars against Syria, Yemen, Afghanistan and Iraq; the proliferation of precarious work; Islamophobia and xenophobia; the Israeli occupation of Palestine; the imprisonment of Huber Ballesteros, Oscar Lopez Rivera and other political prisoners; the absolute impoverishment of over 500 million people, the majority in Africa; climate change; attacks on labor rights; theft of water resources; the oppression of women; deaths due to unsafe work; rising unemployment; the right-wing coup in Brazil; and other world problems created by capitalism.

“Only revolution can put an end to this,” said a German delegate. A female delegate from Cameroon attacked “the capitalist system that is killing us.” An Egyptian speaker said, “The struggle should be against capitalism.” As a leader of the All India Trade Union Congress (AITUC) put it: “The whole world runs because of workers. Why should those who produce food go hungry, who produce clothes go clothesless, who produce medicine not get health care? Capitalism should be demolished.”

On the road toward demolishing capitalism, “Class-oriented trade unionism is an absolute necessity,” said Nzamande on the final day of the congress.

Giving the closing speech, Mavrikos said, “We have to uplift the content and the forms of our struggle with the direct aim of the emancipation of the working class from the capitalist exploitation.”

The congress re-elected Mavrikos as General Secretary and Mzwandile Makwayiba, president of South Africa’s National Education, Health and Allied Workers Union, as President. The international governing body expanded the number of African representatives from eight to 12; all but eight members are from the global South. This reflects the worldwide changes in the character of the working class — the transfer of work to low-wage countries while the wealth being produced flows back to the capitalists in the imperialist powers.

COSATU and WFTU joined in a long, spirited march on Oct. 8 to the Curries Fountain Stadium where COSATU was founded. Freedom songs from the anti-apartheid struggle blared from COSATU sound trucks. Brazilians chanted “Fora Temer” — Temer Out. (Temer is Brazil’s current president, placed in office by an illegitimate “parliamentary coup.”) AITUC led chants of “Down, down capitalism; up, up socialism.” A short rally followed the march.

The WFTU Congress was a huge step forward for the world labor movement, one that will help make real the slogan “Workers and oppressed peoples of the world unite.”