The writer is allergic to bee stings; while a teenager, she developed difficulty breathing after a sting. A doctor administered epinephrine and an antihistamine. Epinephrine saved her life. 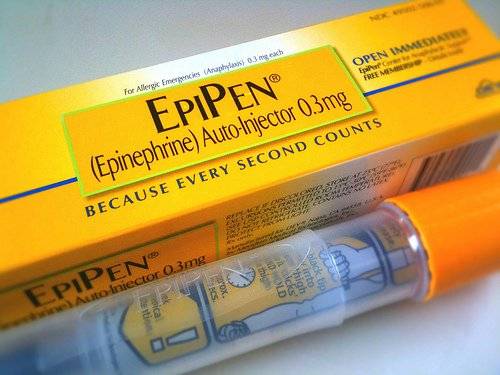 Amarria Johnson, a first-grader with a peanut allergy, was in a playground when a classmate gave her a peanut in 2012. Within minutes she had trouble breathing. When she was taken to the school clinic, there was no prescription in her name for an EpiPen — the brand name for epinephrine, which treats anaphylaxis, a life-threatening allergic reaction, in a self-injecting pen.

Amarria was pronounced dead at the hospital. The Hopkins Elementary School in Richmond, Va., had an EpiPen prescribed for another child on hand, but was legally barred from using it.

Soon after Amarria’s death, the Virginia State Legislature passed Amarria’s Law, which required the state school system to stock EpiPens and allows school authorities to administer one to a child without a designated prescription in a life- threatening emergency.

Epinephrine, which has been around for a century, costs less than $1 per dose.

The EpiPen was developed in 1977 and priced at $57 per device when Mylan Pharmaceuticals bought it in 2007. Mylan raised the price then, and in subsequent years.

The Food and Drug Administration changed the protocol for epinephrine in 2010 and recommended an EpiPen twin-pack, based on studies that showed some children needed more than one dose. Mylan developed a twin-pack and this year raised the price to $600. That meant Mylan raised the cost six-fold since acquiring the EpiPen.

Since epinephrine loses potency after a year, people must buy new EpiPens every year for themselves or their children to both carry and have at home. Parents may have to purchase a set for their children’s school if the facility doesn’t have a program covering its purchase. Relatives may also need to stock the drug. For many low-income families, the cost is prohibitive.

Mylan developed a major marketing campaign to get the medication into schools through its EpiPen4Schools program, and now services 25,000 schools in 50 states. The government funds this program.

The only other self-injectable epinephrine is Adrenaclick, priced at $450. But most insurance companies don’t cover it, it isn’t widely available, and pharmacies can’t swap it for EpiPens when a prescription is written for Mylan’s product. Most doctors and other health care providers are familiar with EpiPens, and patients are familiar with its easy use.

U.S. price-gouging vs. no profit motive in Cuba

The U.S. pharmaceutical industry is part of the medical-industrial complex, which stretches across the globe, reaping billions of dollars in profits. Yet, the capitalist government does little, if anything, to control medication costs. Relations are often cozy between government officials and Big Pharma executives.

In fact, the Oct. 22 New York Times reports that Teneo, a global advisory firm “with roots in the Democratic establishment,” organizes salons for its clients at high-priced restaurants and private residences, which it did for Heather Bresch, chief executive of Mylan in 2011. The following year, she and a Teneo employee “met with President Obama’s senior adviser, Valerie Jarrett, at the White House.”

Turing Pharmaceuticals raised the price last year of Daraprim, an antiparasitic drug used to treat malaria and toxoplasmosis, from $13.50 to $750 per pill. It is often taken by people with AIDS or transplant patients. Protests resulted in a price reduction to $375 per pill, but a daily dose of two tablets adds up to $750.

Gilead Sciences, which makes the highly effective new hepatitis C medications, Sovaldi and Harvoni, charges from $84,000 to $94,000 for a three-month course of treatment. The company made a deal to sell Sovaldi to the Egyptian government for $900 for each course of treatment. It also allows India to manufacture generic versions of the drugs, which sell for $4 per pill.

Meanwhile, people in the U.S. are fighting for these medications to be affordable. Pennsylvania prisoners, including world-renown political prisoner Mumia Abu-Jamal, are suing the state Department of Corrections to obtain the curative hepatitis C drugs.

A March 17 article in AlterNet, “10 of the Worst Pharma Companies Rip-Offs — and Their Plan to Keep the Gravy Train Rolling,” lists several other companies which charge exorbitant prices for life-savings drugs. It describes Big Pharma’s fierce opposition to consumer pressure or government attempts at controlling prices.

In contrast, Cuba, which is a poor country due to the nearly 60-year U.S. blockade, makes medications accessible to all its people — due to the absence of profit-seeking drugmakers. The socialist country has developed research and biotechnology, producing medicines and vaccines to deal with tropical and infectious diseases and other ailments.

Cuban researchers recently developed Heberprot P to treat foot ulcers from diabetes. It potentially reduces amputations by 75 percent and is now being used in 26 countries. Cuba’s CIMAvax vaccine is proving effective in extending length and quality of life for people with early lung cancer. The blockade bans both drugs from use in the U.S.

Eolis worked as an emergency room nurse for 35 years and retired after eight years as a nurse practitioner.