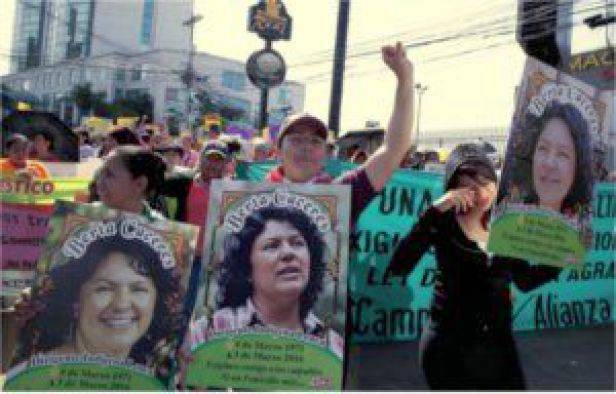 Honduran women march in Tegucigalpa in the spirit of Berta Cáceres on International Women’s Day, March 8, 2016.

Oct. 24 — Since the 2009 coup that ousted President Manuel Zelaya, our country’s name has frequently been found in the headlines of the international press.  Headlines shout again and again of barbarisms committed after the coup that shocked national and international public opinion, placing our country on the world map.

Indigenous leader Berta Cáceres was killed here last March and José Ángel Flores, leader of the United Peasant Movement of Aguán, just last week. To analyze the current situation in Honduras starting from those murders requires a complex effort to untangle the threads of a structural problem that has led to these constant, tragic and inhuman consequences.

The 2008 financial crisis, unleashed by the bursting of the housing bubble in the heart of U.S. capitalism, led to a reorientation of Washington’s international strategy to appropriate the resources of the peoples of the world. Simultaneously, mechanisms of world domination that had been neglected were brought back into play, especially after setbacks the U.S. suffered in the Middle East.

It was also a most important moment for the left in Latin America. The Bolivarian Revolution was consolidating its geopolitical position. Processes of liberation were advancing and governments on the continent began to promote sovereign policies that fostered the development of social-democratic welfare states.

The South American states of Argentina, Uruguay, Brazil, Bolivia, Ecuador and even Chile carried out significant changes which could be summarized — in some countries more than in others – as a rollback of the neoliberal model. These countries applied strong social investments and a boosting of national economies. Accompanying the initiatives was a more supportive discourse for confronting the problems of humanity.

These changes broke the axis of the “single thought” [capitalism solves all] imposed by the Washington Consensus after the fall of the Berlin Wall and the collapse of the Soviet Union and the countries of the Socialist Bloc in the 1990s.

In Central America, the Sandinista Front (FSLN) took hold of the government of Nicaragua, and for the first time in history the Farabundo Martí National Liberation Front (FMLN) won the elections in El Salvador. Cuba, which remained a beacon of light in the Caribbean, accompanied all these processes, redeemed by history for her courageous and exemplary struggle.

Public opinion in the hemisphere and globally also raised more forcefully the historic claims for the independence of Puerto Rico, the cause of Haiti and strategic alliances for the development of the other Caribbean countries, most of them members of [the international trade and solidarity organizations] ALBA [Bolivarian Alliance for the Peoples of Our America] and Petrocaribe [a Venezuelan program supplying oil to other countries at preferential prices].

If these and other global contradictions such as the growth of the Chinese economy and the strengthening of Russia as an economic and military power continue to consolidate, this will be a threat to imperialist hegemony until its demise.

Remember that just three years after the U.S. financial crisis, Brazil, Russia, China, India and South Africa created the BRICS investment bank. Its initial projections aimed to displace the International Monetary Fund and the World Bank — the imperialist instruments of domination par excellence — in at least 50 percent of global investment.

The spirit of Berta Cáceres lives on

Honduras, with a dependent and underdeveloped economy subject to the restrictions imposed by unjust relationships of the international market, also occupies a convenient but uncomfortable geographical position: It has three land borders — with El Salvador, Nicaragua and Guatemala — and nine maritime borders, among them a striking proximity to Cuban territory. This gives Honduras a geopolitical status that makes the country a number one priority for the U.S. bent on safeguarding its interests in the region.

The frequent political murders in Honduras, the deepening of neoliberal measures — such as the privatization of public services — and the corruption scandals are nothing but the result of the conscious decision of U.S. imperialism, together with the local oligarchy, to strengthen its plans to dominate the entire continent and the whole world.

These measures are a clear political reaction of capitalism in its attempt to resume its growth. The measures are aimed at the peoples and governments in the world that challenge imperialism by developing outside of imperialism’s sick engine for plundering natural resources, and outside of the death machine of the military-industrial complex that requires, every day, greater suffering by all humanity.

Despite these challenges, the popular struggle also tends to regroup, to find ways to struggle despite the barbarity in Iraq, Afghanistan, Libya and Syria, and despite the coups in Honduras, Paraguay, Brazil and electoral defeats in Argentina or the plebiscite rejecting peace in Colombia. The ebbs and flows of the peoples also promise new arenas of confrontation with capitalism, as is now occurring in the Bolivarian Republic of Venezuela and as has been shown by Russia’s partial defeat of imperialism in the Middle East, and the resurgent popular mobilizations in Argentina and Brazil.

The spirit of Berta Cáceres lives on as well in protests through the narrow streets of Tegucigalpa, because social events are also an expression of life, which surges and re-emerges so injustice does not prevail, where political vanguards are capable of re-establishing themselves and their promise of victory. History is not a pendulum cycle ticking from left to right or vice versa. History is made by the people from the bottom up, so that the force of the organized majority makes reason prevail.