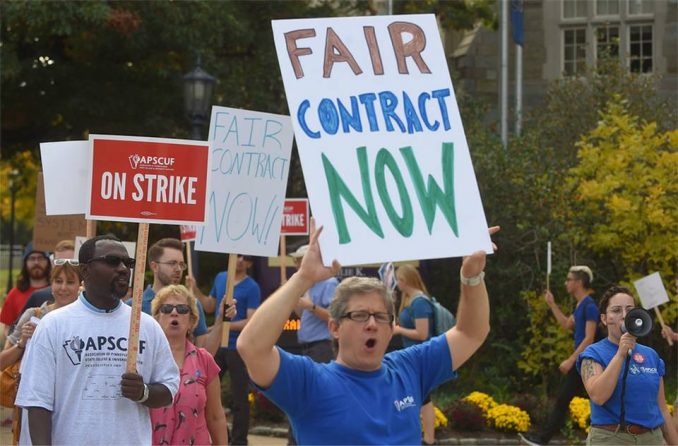 Strong, spirited strike solidarity between professors, adjuncts and students has proven to be unbeatable. Pennsylvania State System of Higher Education (PASSHE) officials must have come to that conclusion before they signed off on a tentative agreement with the Association of Pennsylvania State College and University Faculties on Oct. 21 after a three-day strike.

The state had proposed 249 changes to the contract with APSCUF members at universities in West Chester, East Stroudsburg, Bloomsburg, California, Cheyney, Clarion, Edinboro, Indiana, Kutztown, Lock Haven, Mansfield, Millersville, Shippensburg and Slippery Rock. In September, the union filed an unfair labor practice, complaining that state officials were not negotiating “in good faith” over the many demands. (wdadradio.com, Sept. 29)

“We fought back virtually every one of [the contract changes],” said APSCUF President Kenneth Mash in announcing the settlement. “And the amount of love and respect throughout this from our students, you can’t pay for that with money.” (New York Times, Oct. 21)

The first strike in the 34-year history of the state-supported university system was marked by student walkouts by hundreds of students at 11 a.m. on Oct. 19. Student marches, organized by the PASSHE Student Power Network (SPN), joined up with their professors and adjuncts on picket lines because “we all understood what the PASSHE administration was pushing, which were bureaucratic, cowardly measures that really sought to change the fabric of our state system education,” said West Chester University student Sabina Sisterovich.

“The student turnout was also our response to a growing sentiment amongst higher-ups that young people are complacent and uninformed,” Sisterovich continued. “I think we showed that we are quite the opposite. We won’t make room on our campus for destructive, negligent and profit fueled changes, and neither will our professors.”

WCU, with 17,000 students, is the largest campus in the state system totaling 105,000. Students there in SPN and SDS organized a caravan on the second day to Harrisburg, Pa., to confront PASSHE Chancellor Frank T. Brogan.

Brogan had told a Philadelphia House committee last spring that PASSHE has about the same funding as it did in 1997, with about 13,000 more students. In the past eight years, 900 staff positions have been cut. (theslateonline.com, April 18)

On Oct 21, WCU picketers marched to nearby Westchester to confront Philadelphia Gov. Tom Wolf, a member of the system’s board of governors. The Philadelphia Inquirer reported that he was “extremely disappointed” in the strike and warned of detrimental effects on the system for years to come, claiming the system has lost 12 percent of its enrollment since 2010 and faces a $10 million deficit. (Philly.com, Oct 19)

When Sisterovich asked the governor to join the picket line, Wolf replied, “You should really get back to class.”

According to PASSHE spokesperson Kenn Marshall, the tentative agreement includes raises and measures to save on health care costs. (New York Times, Oct. 21) While all the details for the agreement have not been made public yet, Ben Kuebrich, WCU professor on line for tenure, explained that he and everyone he’s talked to “feel good about the results — it’s a big win!”

Instead of new rules demanded by PASSHE that would have amounted to a 20 percent pay cut, adjuncts reportedly will receive a raise of 1 percent each year.

Kuebrich said the 59-hour strike made the union stronger because union members at each of the 14 campuses now feel a new sense of solidarity with each other.

Among factors on why the strike was so effective is the inclusion of adjuncts alongside tenured professors in APSCUF. This inclusion is a major reason why the starting salary for WCU adjuncts is $46,610 (tinyurl.com/PASSHE-APSCUF), significantly over the national average salary of $27,800 for adjuncts at most U.S. universities. (glassdoor.com)

WCU is a teaching college, not a research institution, so students who hope to become teachers themselves someday felt an unequivocal comradeship with their striking professors.

To the beat of drums, triangles, banjos and other musical instruments, picket lines at 10 sites on the WCU campus as well as a Philadelphia Center City location featured chants such as “Support public ed! You heard what we said!” and “Hey hey, ho ho! David Brogan has got to go!”

Picket lines were immediately ended as news of the tentative three-year agreement was relayed to picket captains. The pact, which would run retroactively from the June 30, 2015, end of the previous contract through June 30, 2018, requires the approval of the PASSHE Board of Governors in Harrisburg. A legislative assembly of APSCUF members must also approve the new contract before its 5,500 members can vote on it. The ratification process could take up to six weeks.

The Pennsylvania faculty strike may be a harbinger of more labor struggles at other U.S. university campuses.

In August, the National Labor Relations Board ruled that graduate students who teach at private universities are employees with full rights to join unions, a sweeping decision that paves the way for student unionization on campuses nationwide. (Wall Street Journal, Aug. 23)

And at Harvard University, dining hall workers have been striking since early October. That strike is the first by Harvard employees since 1983 and the first ever during the academic year.