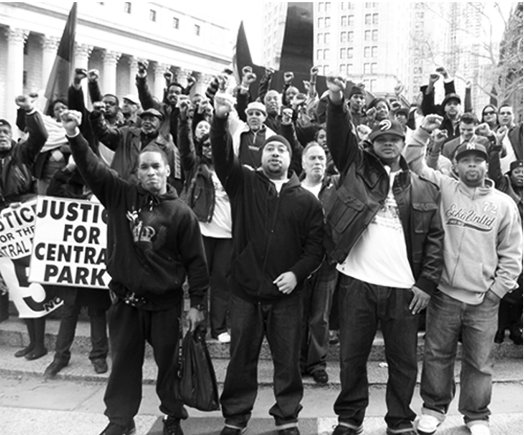 Who are our enemies? Who are our friends? This is a question of the first importance for the revolution. To ensure that we will definitely achieve success in our revolution and will not lead the masses astray, we must pay attention to uniting with our real friends in order to attack our real enemies.

I first arrived in New York in the spring of 1990, an enthusiastic young white worker from the Midwest, eager to become a revolutionary. I quickly learned that one of the most difficult struggles being waged in the city, one that required a lot of determination and courage, was defense of the Central Park Five.

This group of Black and Brown teenagers, not much younger than me, had been framed up just a year before. The New York Police Department forced them to confess to the brutal rape of a white woman. These youths and their communities were demonized by the media and politicians, both conservative and liberal.

Leading the charge against them was Donald Trump, a wealthy casino owner and real-estate developer. Trump took out full-page ads in all four of the city’s leading newspapers calling for reinstatement of the death penalty to be used against the Five. He never missed an opportunity to harangue them in the media.

Despite the community’s determined organizing, led by Pan African revolutionary Elombe Brath, despite our ongoing protests and exposure of the criminal conduct of the police, prosecution and media, the Five were convicted and sentenced to long prison terms.

Eventually the true perpetrator of the rape confessed, and after another long battle, the Five were finally freed.

But the impact of the case was long lasting, and hardly accidental. The campaign waged against them was an essential stepping stone in New York ruling class’s efforts to “redevelop” large swaths of the city. This so-called “redevelopment” forced mostly Black and Brown working-class and poor communities out of the city while escalating police power. It turned much of Manhattan — and later Brooklyn and now parts of Queens and the Bronx — into a kind of gated community for the well-to-do.

The tactic that began in New York spread across the country, and eventually to Europe as well.

Trump led the charge against the Central Park Five, not only because he is a racist bigot of the worst sort — which he most certainly is — but because he knew it would be profitable for his real-estate interests.

Those of us who have been fighting Trump for years, even decades, understand that he is a war criminal of the first order — in the domestic class war — just as Hillary Clinton is guilty of war crimes abroad.

The 2016 presidential election is frequently characterized as unprecedented and down-right bizarre. So imagine how it looks to people living outside the United States, especially in countries like Russia, Syria, Yemen, Venezuela, the Donbass republics. These and and many other countries have been demonized, subjected to sanctions, Western-sponsored terror and drone bombings or even open warfare.

It may come as a surprise to many activists in the U.S., who in recent years have been involved in the Black Lives Matter struggle, the fight to defend refugees and immigrants, and the battle to raise the minimum wage, that many people abroad, including some opponents of U.S. imperial power, could view Donald Trump as the “lesser evil.”

But right now, millions around the world are afraid of the consequences of growing U.S. aggression directed at Russia, which includes the possibility of open warfare or even a nuclear exchange. The conflict has escalated over Washington’s plans for regime change in Syria, its support for the far-right junta in Ukraine and the further expansion of NATO militarism to Russia’s Western border.

Before this election campaign, Trump never once spoke out against U.S. economic and military aggression anywhere in the world. He supported the scapegoating of Muslims and others after the 9/11 attacks in New York, which laid the basis for the invasion of Iraq and the entire “war on terror.”

But Trump is a canny enough politician to know that U.S. interventions in Afghanistan, Iraq and Syria, because they are costly and go on endlessly, are unpopular.

He is also highly selective in his “anti-war” declarations. While cultivating a reputation for seeking cooperation with Russia, he has threatened war against China, Syria, Palestine and Mexico, to name just a few.

To put it bluntly, there is a sector of U.S. white supremacists that supports isolationism and friendship with Russia because they view it as a “white man’s nation.” This is the basis of Trump’s appeals on the issue.

But Trump is running for office to represent the U.S. imperialist ruling class, which has devoted decades of effort to breaking up and taking over the Russian Federation. There is no sign this class is reversing itself regarding Russia.

Whatever Trump’s personal program as president, he would be constrained to serve the interests of this class and restricted by all sorts of pressure from the Pentagon’s officer corps, just as Obama has been.

Can anyone believe that Trump — an oligarch claiming to be a populist enemy of the elite, a stirrer-up of racism and national chauvinism, is a friend of peace? Who could fall for such a thing?

Sadly, it seems, some do. Just as others can fall for Clinton posing as the last defense of the rights of women, immigrants, the LGBTQ community and African American people. Clinton was part of the campaign to criminalize and scapegoat society’s most oppressed and downtrodden, labeling them “predators.”

Those who fall for Trump or Clinton succumb for the same reason — fear.

Many workers and progressives in the U.S. feel compelled to support Hillary Clinton despite their better judgement. Some even fall into the trap of desperately trying to justify her behavior out of fear of Trump’s fascist-tinged campaign.

In the U.S., we on the left are more accustomed to this kind of labeling of the Democratic Party as the “lesser evil.”

But this year, there are many workers and progressives abroad (and to a lesser extent in the U.S. as well) who seem driven by the same kind of desperation to support Trump. They excuse his misogyny and racism. They embrace conspiracy theories, for example, that the women coming forward against Trump’s sexual abuse are “creations” of Clinton and her supporters meant to help steal the election from him.

It’s a tough thicket to cut through. There’s only one way to navigate it: with class consciousness. As Workers World Party’s campaign manager Teresa Gutierrez wrote recently, we have to “put on our class-conscious glasses.”

Divide and conquer is always the strategy of the U.S. ruling class. In this case, it is to divide the international struggles against war from the domestic struggle against racism and national oppression.

The danger is that, at a critical moment, those who struggle against U.S. imperialism — those who should be natural allies — will be posed against one another as enemies. And only imperialism can benefit from that.

We must remind the workers and progressive forces at home and abroad that the only guarantee against catastrophic war is building a militant, united fightback against capitalism–starting right in the U.S.

We must patiently and firmly warn the international anti-war and anti-imperialist movement against the trap Trump has laid for them, just as we warn people here against the trap Clinton has set for the struggles against racism, sexism and anti-LGBTQ oppression at home.

Those who truly want peace, who want to see U.S. aggression defeated, need to make common cause with the struggles for justice being waged inside the U.S.

We must be brave enough to swim against the tide of lesser-evilism, whatever form it takes, and have the courage to tell the truth to the workers of the world, even at the risk of temporary isolation.

This is an urgent task of anti-imperialists and anti-war activists or anti-fascists and all revolutionaries in the U.S. at this moment.