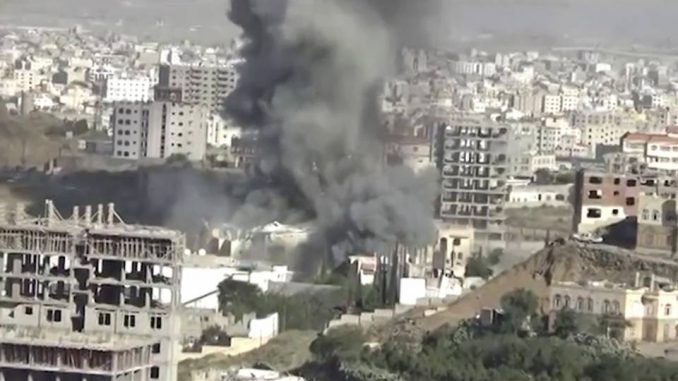 Bombing of funeral hall in Yemen.

Oct. 17 — As Washington escalates bombing operations against Yemen, a new proposal to cease hostilities has been announced. Secretary of State John Kerry, British Foreign Secretary Boris Johnson and United Nations envoy to Yemen, Ould Cheikh Ahmed of Mauritania, issued the call Oct. 16 from London amid discussions of the war in Syria.

Kerry said there have been communications with the Houthis and Yemeni President Abdu Rabbu Mansour Hadi, and “it is time to implement” an unconditional cease-fire and negotiate.  He said it is urgent to end the violence in Yemen and work toward a political settlement, as “the only way it will be ultimately resolved.” (Al Manar, Oct. 17)

Reporting on the Navy’s strikes, the Oct. 13 British Guardian warned of a  potentially deeper quagmire for the U.S. Although these are not the first attacks by the Pentagon and CIA against people they deem “terrorists” in Yemen, the recent missile strikes will inevitably prompt widespread resentment against the Obama administration — and will increasingly turn the U.S. war machine and Washington’s allies into compelling military targets.

Spencer Ackerman wrote in the Guardian: “While the U.S. has conducted lethal attacks in Yemen against al-Qaida forces throughout Obama’s presidency, killing civilians as well as U.S. nationals … [the Oct. 13] reprisal strikes were Washington’s first against the Houthis. They raised the prospect of deeper U.S. involvement in what many in the region and Washington see as a proxy war between Iran and Saudi Arabia.”

With Washington’s backing, the Saudi Arabian and Gulf Cooperation Council (GCC) coalition launched an aerial campaign and ground war in March 2015 . Over 10,000 Yemenis have been killed, tens of thousands injured and several million displaced.

President Barack Obama’s administration has sold $110 billion in weapons to Saudi Arabia, and authorized the use of U.S- manufactured warplanes, bombs, intelligence coordination and refueling technology.  This has created one of the worst global humanitarian disasters today — in the most impoverished country in the Middle East.

The Saudis claim they are assisting reactionary President Hadi’s “legitimate” government. But it was ousted by an alliance of Yemeni forces, including the Ansarullah working with military units still loyal to former President Ali Abdullah Saleh. The Ansarullah is reportedly assisted by the Islamic Republic of Iran.

This announcement about an alleged “cease-fire” in Yemen comes amid the intensification of the war in Syria. Washington and its allies are still committed to overthrowing President Bashar al-Assad’s government in Damascus.

Pentagon forces bombed a Syrian military base in the east of the country on Sept. 17, sabotaging a cease-fire agreement, killing 90 soldiers and injuring over 100 others.  Although the Obama administration expressed “regret” for the attacks, saying the actual targets were fighters for the Islamic State group operating in the area, the Syrian and Russian governments rejected this explanation.

The New York Times reported Sept. 17: “The attack went on for about 20 minutes, with the planes destroying the vehicles and gunning down dozens of people in the open desert. … Shortly after this, an urgent call came into the American military command center in Qatar, the outpost in the Persian Gulf that coordinates the aerial campaign in Syria and Iraq.”

The article quoted a Russian official who said, “American planes were bombing Syrian troops,” and demanded that the strike be called off immediately. “The Centcom [U.S. Central Command] official said the attack was halted within minutes, but not until dozens had been killed.”

Moscow is supporting the Syrian government and has carried out airstrikes against IS fighters since late 2015. Despite Russian involvement and recent diplomatic discussions between Kerry and Russian Foreign Minister Sergei Lavrov, relations are deteriorating.

Samantha Powers, U.S. ambassador to the United Nations, walked out of a Security Council meeting requested by Russian envoy Vitaly Churkin to discuss the bombing of Syrian troops in Deir al-Zour. Since September, diplomatic efforts to end the war in Syria through a political agreement have remained at a standstill.

A growing conflict in Yemen that would require intensified offshore and aerial bombardments by Washington can only complicate matters further in the Middle East. With the U.S. national election for president and congressional seats at stake, the administration is obviously concerned about being seen as the source of instability and displacement throughout the region.

Consequently, little information on events in Syria and Yemen is being given to the U.S. population.  The election’s outcome seems irrelevant to U.S. foreign policy in the Middle East and the Horn of Africa. The Red Sea and Gulf of Aden are strategic waterways connecting the Arabian Peninsula with the Horn of Africa. Militarization is intensifying in both areas at Washington’s direction.

Compounding tensions in the region are U.S.-backed military efforts to retake the Iraqi city of Mosul from IS, which began on Oct. 17. A protracted battle by the Iraqi army to reclaim the country’s second-largest city could cause monumental casualties and displacement.

The Associated Press reported that day, “Though some troops were less than 30 kilometers (20 miles) from Mosul’s edges, it was unclear how long it would take to reach the city itself, where more than 1 million people still live.” Aid groups warn a mass exodus of civilians “could overwhelm refugee camps.”

The article explains, “Mosul fell to IS in … 2014 as the militants swept over much of [Iraq’s] north and central areas.”  Weeks later, its leader, Bakr al-Baghdadi, announced from a Mosul mosque “the formation of a self-styled caliphate in Iraq and Syria.”

The war crises in Iraq, Syria, Yemen and Somalia result from imperialist interventions by Washington and NATO and their surrogates in the region. These military campaigns have created the worst migrant and humanitarian disaster since the conclusion of World War II.