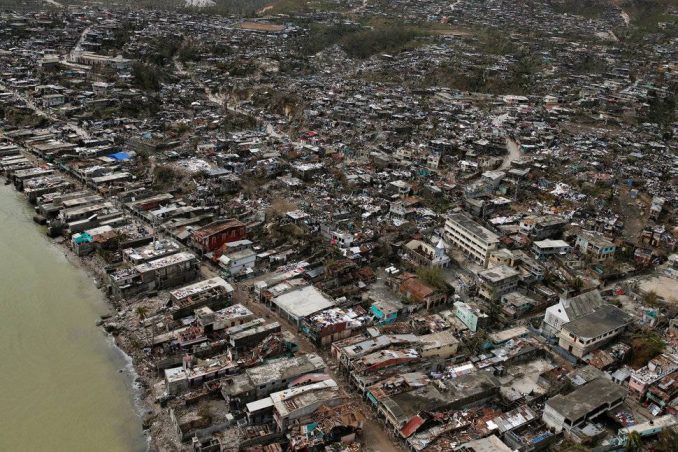 Oct. 17 — Over 1,000 people have reportedly died as a result of Hurricane Matthew in Haiti, just six-and-a-half years after a devastating earthquake killed hundreds of thousands.

In addition to the deaths, injuries and physical destruction, there is concern that an outbreak of cholera could erupt as it did in the post-earthquake situation in 2010.

Today’s relief efforts surrounding the destruction in the country should be viewed in the same context as the military history of European and United States interventions. Haiti was born during the late 18th and early 19th centuries through a war of national liberation mainly in opposition to French colonialism, but it also included battles against Spain and Britain.

The director of the U.S. Southern Command Admiral Kurt Tidd indicated on Oct. 15 that the Pentagon’s role in the relief operations in Haiti would conclude in a few days as civil authorities took over. He said the main task involved delivering hundreds of thousands of pounds of rice and medical supplies.

The Pentagon jets that had been in Haiti for 10 days would begin pulling out, he added, while airlift duties would shift to the 11 helicopters on the amphibious assault ship Iwo Jima — a mix of CH-53 Sea Stallions, MH-60S Knighthawks and MV-22 Ospreys. (Navy Times, Oct. 15)

Yet for over a century, the U.S. has made several military invasions and occupations of Haiti. From 1915 to 1934, Washington’s military forces occupied Haiti and suppressed a revolt against successive administrations, while treating the country as a colony.

In more recent times, in 1994 the administration of President Bill Clinton sent thousands of Marines into the country ostensibly to reinstall Haiti’s elected leader. President Jean-Bertrand Aristide had been overthrown with the assistance of the U.S. government under the previous regime of George H.W. Bush Sr.

Conditions set down during the 1994 intervention plagued Haiti for another decade, when George W. Bush Jr. in 2004, on the bicentennial anniversary of Haiti, deployed thousands of additional troops to topple the Aristide government, forcing him into exile for several years.

The Pentagon, along with military forces from Canada and France, paved the way for the United Nations Mission to Haiti (MINUSTAH) which maintains a presence in the country. These military forces, which have occupied Haiti for more than two decades, have not been able to ensure that adequate relief reaches the majority of the impoverished population.

Haitians are once again fleeing Haiti to seek refuge and work in other countries, including the United States. In the wake of the hurricane, Department of Homeland Security Secretary Jeh Johnson said the Obama administration would suspend deportation flights to Haiti. Before Hurricane Matthew hit, the U.S. government announced in late September that an acceleration of deportations of Haitians would resume.

Deportations were halted after the 2010 earthquake. Nonetheless in 2011, these expulsions restarted, ostensibly at a slower rate.

However, this policy of temporary suspension is shrouded in ambiguity because Johnson also said the flights would resume very soon. At the same time the issue has gained almost no attention in U.S. corporate and governmental media, which is consumed with the mudslinging that characterizes the 2016 presidential elections.

On the Mexican border with the U.S. at Tijuana and other border towns, Haitians are stranded awaiting hearings with U.S. immigration officials. Many have traveled from Brazil, where they found employment around the 2014 World Cup and 2016 Olympic Games.

With the political coup against Worker’s Party President Dilma Rousseff and the overall economic downturn in Brazil, Haitians are rapidly moving across South and Central America in search of refuge and employment. These problems will only be addressed through a mass outcry from immigration advocates along with civil and human rights organizations.

The U.S. has always maintained a racist immigration policy which benefits those nationals who can best benefit the political priorities of the U.S. ruling class. These and other issues will require the attention of U.S. activists leading into the next administration.

What happens to the money?

In the aftermath of the January 2010 earthquake in Haiti, the U.S. government and other entities pledged to raise hundreds of millions of dollars for humanitarian assistance and reconstruction. According to most accounts, the funds that were raised did not benefit the people in need of assistance.

An article published by the Huffington Post on Oct. 14, entitled “Should You Trust the American Red Cross with Your Donation for Haiti?” questioned the role of such agencies that are now making appeals for assistance to Haiti.

The article reads: “The Red Cross, the world’s 16th-largest charity with a yearly budget of more than $3.1 billion, has a complicated history in Haiti. The group raised $500 million in donations after the 2010 earthquake, promising to provide shelter, rebuild infrastructure and meet basic needs. But a 2015 investigation by ProPublica and NPR found that the Red Cross fell short of its promises. The charity had only built six permanent homes in the entire country, the media organizations found, and its efforts were plagued by internal disorganization, lack of experience in Haiti, use of donations for its own expenses, and tensions with residents and government officials.”

Although the Red Cross claimed that 91 percent of the funds collected went directly for charitable purposes, the ProPublica and NPR investigation said that it was only 60 percent, with the remaining 40 percent going to the agency’s administrative costs. Haitians who are involved in providing assistance on the ground inside the country emphasized that aid promised by the Red Cross was never delivered.

Institute for Justice and Democracy staff attorney Nicole Phillips, who is based in the Haitian capital of Port-au-Prince, disputed the Red Cross in the article: “I think the overwhelming experience from Haitians with the Red Cross has been disappointment and frustration.”

Phillips encouraged individuals and organizations seeking to provide assistance to donate directly to organizations based in the country. Stressing this point, Phillips noted, “Haitians know how to help other Haitians better than we do, and their efforts are extremely impressive.” Besides, she added, that eliminates costs of plane tickets and accommodations.