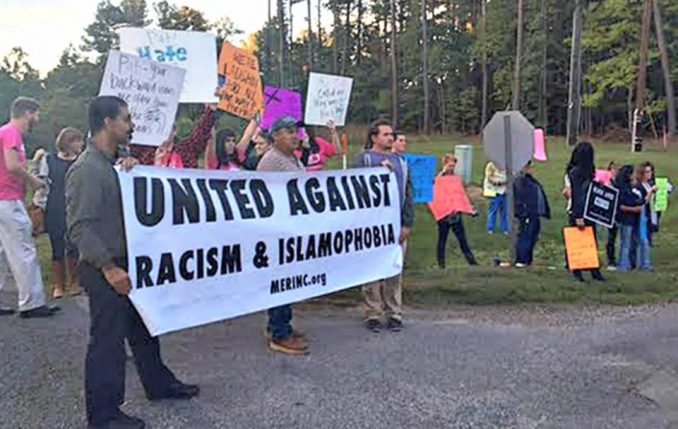 Durham, N.C. – A spirited demonstration of activists from nearly a dozen organizations was held Oct. 11 outside the North Carolina gubernatorial debate between Pat McCrory and Roy Cooper. They raised up a people’s agenda during the protest.

The coalition pointed out how both McCrory and Cooper have opposed the interests of the people and acted to advance a program that serves the 1% as well as all other racists and bigots:

“The record implicates both candidates as representatives who are not for the people. McCrory’s House Bill 2 targeted transgendered people, limited the ability for local governments to enact minimum wage standards and took away protections for certain forms of employment discrimination. By signing into law HB318, McCrory signed an anti-immigrant bill that does not protect workers, and instead restricts the ability for communities to get ICE out of their cities and sets restrictive limits on jobless workers’ ability to receive food assistance. HB972 bars public access to police [camera] footage without [a judge’s] approval and creates an additional barrier for communities fighting for a more transparent and accountable criminal justice system.”

The coalition decried Attorney General Roy Cooper’s refusal to retry the cop who shot and killed Jonathan Ferrell, a young unarmed Black man, on Sept. 14, 2013. So far in 2016, 29 people have been killed by law enforcement in North Carolina. Under Cooper’s watch, no cop has been prosecuted for killing someone, except for one who killed a white man.

Activists noted that Cooper also supported McCrory’s request to stop sending Syrian refugees to North Carolina, showcasing both of their xenophobic and Islamophobic positions. McCrory signed an anti-Muslim (anti-Shariah) law in 2013 that was supported by many Democratic legislators. Neither candidate has supported the growing movement for a $15 minimum wage or the right of public workers in the state — and all workers — to collectively bargain.

“The election process is disempowering for working people,” said Darrion Smith, a member of NC Public Service Workers Union, United Electrical Workers Local 150 and Black Workers for Justice. “We can’t just vote, we have to organize and exercise our power in the workplace, communities and in all of the institutions that impact the lives of the majority of the people. We need to build people’s power to hold elected officials and other institutions accountable to the needs of the majority of people, not the wealthy 1%. That’s why, not only will we be out raising up a people’s platform on Oct. 11, but will continue our efforts to convene a broad and united People’s Assembly that can bring together working people and build power.”

The coalition plans to convene a Triangle-wide [Raleigh, Durham and Chapel Hill] People’s Assembly in December.