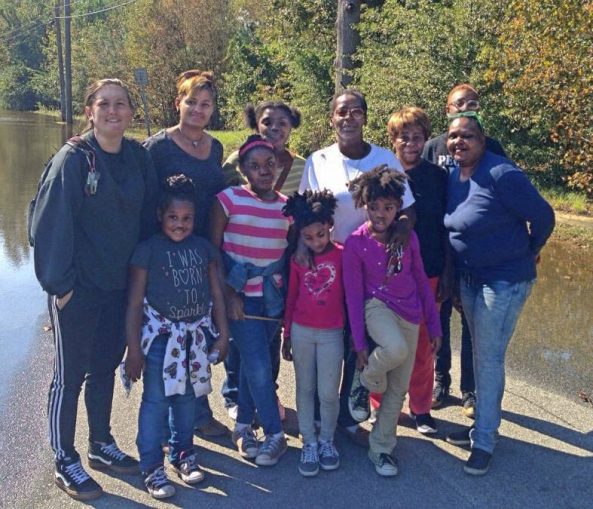 Members of the Solidarity caravan with Carolyn Dawson and Pastor Nancy Wade and Pastor Wade’s family at the edge of floodwaters in East Kinston, N.C. Ms. Dawson’s home is just beyond the trees.

Kinston, N.C. – As the Neuse River crested in the wake of Hurricane Matthew on Oct. 15, leaders from the Charlotte Uprising joined members of the North Carolina Environmental Justice Network (NC EJN) in solidarity caravans to some of the worst flooded areas of eastern North Carolina.

The caravans’ purpose was to document and investigate conditions while bringing needed relief supplies. One group traveled to Duplin and Sampson counties in the Cape Fear River basin. Another traveled to Kinston and Princeville, two towns with heavy flooding caused by the Neuse and Tar rivers. The Tribal Council in Lumberton, out of safety concerns, warned a third delegation not to come.

Residents up and down the coastal regions, even in areas that were not flooded, have been told their water is unsafe to drink. Even boiling the water will not remove coal ash contaminants.

The solidarity contingents arrived Oct. 15, their vehicles loaded down with water, food, clothing, first aid kits, diapers, tampons, sanitary pads, baby wipes and blankets. Most of these items had been donated to the Charlotte Uprising to support the rebellion, but the Charlotte organizers saw an even greater need for the goods in eastern North Carolina.

In Kinston, the contingent met with leaders of the Kinston-Lenoir County Justice Coalition, a group formed about four months ago in response to the police killing of Deriante Miller in March.

Two of the coalition leaders, Ms. Carolyn Dawson — a longtime anti-racist fighter who forced Sears-Roebuck and the local hospital to integrate their work forces — and Pastor Nancy Wade took the delegation to the most impacted neighborhoods to distribute relief supplies directly to the communities. Large groups gathered on main streets, outside community stores and by a ballpark to accept needed supplies.

Community members from Kinston groups like Same Sunday and 606 organized themselves to cook meals and distribute water and clothing. Meanwhile, there was no sign of any Red Cross or government assistance near the flood waters. Instead, the Red Cross, Salvation Army and government agencies were gathered at Kinston High School, north of the town.

Police stopped the delegation at the door to the school. They refused relief supplies. The parking lot was empty except for one family, who accepted diapers and water from the delegation. No one else appeared to be staying at the shelter.

In the last month, North Carolina’s governor declared a “state of emergency” twice. Once was to protect windows at the Bank of America and the Ritz Carlton in Charlotte during the Charlotte Uprising, and now in response to Hurricane Matthew.

In Charlotte, the state deployed National Guard soldiers, chemical weapons, rubber bullets and military vehicles to intimidate and silence the outrage over the police killings of Keith Lamont Scott and Justin Carr. The National Guard lined up in front of the Omni, Ritz Carlton and other expensive hotels to make sure their guests were not inconvenienced.

In Kinston and Princeville, soldiers told residents they had to leave their homes, but gave them no way to travel or a place to go.

The Charlotte delegation could not even get into the town of Princeville, which remains completely flooded. Police stopped everyone at the bridge from Tarboro. Residents gathered in despair at the bridge.

One man said he was waiting for a boat to take him to his house to get medical equipment he needed. Another stared at the rising river. He, like many survivors, was staying with family outside of town, but did not know yet whether his house still stood.

Dangerous hog waste is first allowed to accumulate in “lagoons,” which are huge open cesspits. It is later sprayed into the air over fields and farms as “fertilizer.” The Environmental Protection Agency is currently investigating the NC EJN’s civil rights complaint against the state of North Carolina for allowing these CAFOs and hog lagoons to be located disproportionately in Black communities.

In 1999, Hurricane Floyd started out like Matthew. Both Category 4 storms weakened to Category 2 before coming ashore near the mouth of the Cape Fear River in southeastern North Carolina. In both storms, heavy rains caused the greatest damage, hitting after the ground was already saturated from prior large rainfalls.

Floyd dropped over 19 inches of rain in just a couple of days. Some 51 people died in the state. More lost all their property as Floyd’s flooding submerged their homes and farms.

After Floyd’s water receded, poor and Black communities were left to face ongoing environmental destruction. Hog lagoons overflowed onto surrounding communities, poisoning the soil and the water. Residents of Princeville were displaced to Federal Emergency Management Agency trailers that were placed directly on top of coal ash fill.

This year, Matthew dropped over 20 inches in some places and killed 26 people in North Carolina alone. The Neuse and Cape Fear rivers, which many Black communities depend on for water and fishing, are still polluted by the bacteria from the overflowing hog lagoons.

The environmental justice impact of Matthew is just beginning to be understood. In some areas, Matthew unleashed even more rain than Floyd. The Lumber River in Lumberton crested at a record 24 feet. The Neuse in Kinston also reached its highest level ever of 28 feet, a foot higher than during Floyd.

Duke Energy has admitted that a coal ash pond on the Neuse River near Goldsboro, upstream from Kinston, has been breached, but the company denies that any coal ash contaminated the river. Hog lagoons have once again flooded over and thousands of drowned animals are in the flooded waters.