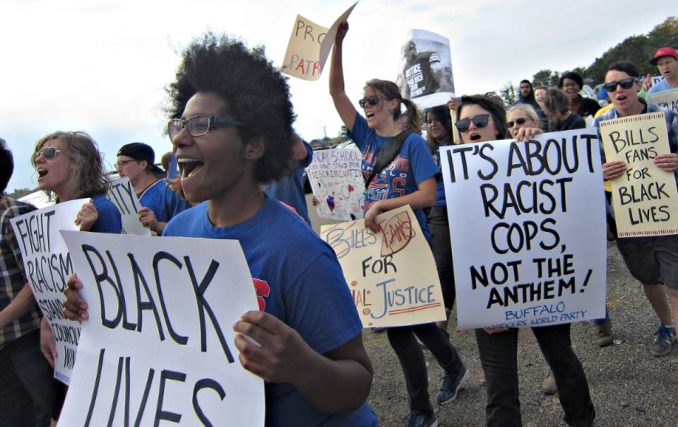 Buffalo, N.Y., Oct. 16 — Not all fans of the National Football League’s Buffalo Bills booed or made vicious threats against the courageous African-American San Francisco 49ers quarterback Colin Kaepernick before the game here today.

In fact, a large contingent of Bills fans was inspired by Kaepernick’s continuing protest of racism and of cops “getting away with murder” of Black people, as the quarterback has stated.

Kaepernick’s Buffalo supporters held a “tailgate party” before the game in the stadium parking lot. They displayed big signs protesting police brutality and murders of Black people and declaring that Black Lives Matter.

After that, their numbers grew as they marched, chanted and took a knee at the stadium gate during the national anthem. The people were intent on showing solidarity with and support for Kaepernick’s refusal to stand “to show pride in a flag for a country that oppresses Black people and people of color.”

Activist Harper Bishop said, “Buffalo … is one of the poorest and most segregated cities in the country, with a deeply racist history. The action was meant to bring attention to local racial justice fights, support Kaepernick and inspire others around the country to continue demonstrations of support.”

Others carried signs supporting Buffalo’s Black City Councilmember Ulysses Wingo, who has stood silently with his fist raised during the pledge of allegiance at the start of council meetings since the Sept. 16 death of Terence Crutcher, an unarmed Black man who was killed by police in Tulsa, Okla. Speaking to local TV news, Wingo said, “Institutionalized racism is real.” An ever-growing group of supporters has turned out at council meetings to raise a fist with him to combat a sewer-load of criticism.

Another mobilization against racism

The action at the Bills game was sponsored by Buffalo groups Just Resisting and Showing Up for Racial Justice and supported by many others, including Workers World Party.

Only one day earlier, those same forces mobilized to protest the front-porch display of a noose by a racist Trump supporter, who told the Buffalo News the noose display was “not a statement of racism.” He previously had a confederate flag hanging from his porch.

One of the organizers, Dianne Britain, said, “We … are here today to pay respect to the Black lives lost to lynching … and those killed and brutalized … by police.”

In a recent incident in Bethel Park, Pa., when three members of an all-Black youth football team took a knee in solidarity with Kaepernick, people in the stands began shouting racial slurs at them, eventually becoming so aggressive that police were called. Their coach said that, as the game proceeded, some of his 12- and 13-year-old players told him they heard the same thing from the opposing team. (Washington Post, Oct. 13)

In September, members of a youth football team in Beaumont, Texas, received death threats and remarks about lynching in online comments after they took a knee during the anthem, local media reported.

Kaepernick has reported he has received countless racist threats and insults, including death threats, as a result of his choice to try to keep racist police brutality and murder an out-front issue.

Supreme Court Justice Ruth Bader Ginsburg, in an interview published Oct. 10, dismissed the protests by Kaepernick and a growing number of others as “dumb and disrespectful.”

“It is disappointing to hear a Supreme Court justice call a protest against injustices and oppression ‘stupid, dumb,’” Kaepernick thoughtfully responded. On Oct. 14, in a statement released by the court, Ginsburg apologized to Kaepernick and said her comments were “inappropriately dismissive and harsh.”